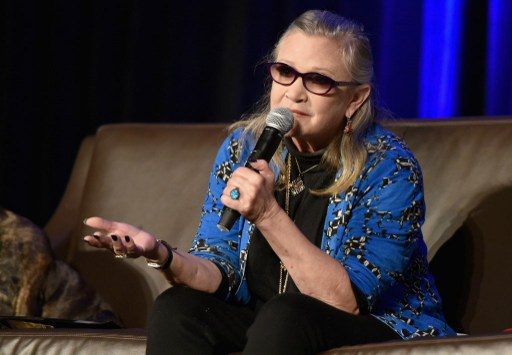 LOS ANGELES, United States – Hollywood star Carrie Fisher has died at the age of 60 after suffering a heart attack.

“It is with a very deep sadness that Billie Lourd confirms that her beloved mother Carrie Fisher passed away at 8:55 this morning,” family spokesman Simon Halls told AFP in a statement on behalf of Fisher’s daughter.

“She was loved by the world and she will be missed profoundly.”

The 60-year-old Star Wars actress was preparing to land in Los Angeles around midday Friday, December 23 (4am, December 24 in Manila), when she went into cardiac arrest, and was given cardiopulmonary resuscitation by an emergency responder on board.

She was removed from the emergency room to an intensive care unit at UCLA Medical Center on a ventilator, her brother Todd Fisher said late Friday.

Fisher was catapulted to worldwide stardom as the rebel warrior Princess Leia in the original Star Wars trilogy, which has been a cultural phenomenon since the release of the films from 1977 to 1983.

Fisher is known for her searingly honest semi-autobiographical novels, including her best-selling debut Postcards from the Edge, which she turned into a film of the same name in 1990.

She has given various interviews over the years about her diagnosis of bipolar disorder and addiction to prescription drugs and cocaine, which she admitted using on the set of The Empire Strikes Back (1980).

She has also discussed being treated with electroconvulsive therapy, in which small electric currents are passed through the brain, to trigger brief seizures. The technique is used to treat some mental illnesses.

She had just finished filming the third season of her latest screen project, the Amazon comedy television series Catastrophe, which is set in London.

She had also been on a publicity tour for her new book, The Princess Diarist, which made headlines because she wrote about a three-month affair with Harrison Ford while they were filming the original Star Wars trilogy. – with reports from Agence France-Presse / Rappler