Martin Scorsese at his sweetest MANILA, Philippines – Hugo is such an embarrassment of riches, a charmer on several levels, that it’s a shame not that many people have partaken of it, locally and internationally.

First of all, it is an amazing 3D movie, arguably the best one yet. In the opening sequence alone, the audience is entreated to a wondrous showcase of the technology: Not only does it show snow drizzling all around, including in the viewer’s direction, the camera proceeds to take us on a dazzling, Peter Pan-like descent, ushering us into a 1930s Parisian train station.

The technology’s basic rationale becomes clearer: It is there to tickle our eyes.

Second, it is truly a movie for the whole family. True, the chief protagonist is an orphaned kid named Hugo, a thieving boy whose own father fate had stolen via a fire accident. And, yes, the story is almost completely from his pre-teen point of view and features familiar, children’s-story high jinks. Yet the movie celebrates cinema, mechanical functions and the senses of purpose and wonder with such exuberance as to affect folks of all moviegoing ages.

Third, this is not just the latest from esteemed and tireless director Martin Scorsese. It is likewise the 69-year-old’s most personal film to date: a touching reflection of his passion for cinema, its history, its legacy, its power as well as its fragility.

Fourth, Hugo is rich in stellar performances. Not just from the actors, led by youngsters Asa Butterfield and Chloë Grace Moretz (the latter masking her American citizenship with a spot-on British accent), and the unsinkable Ben Kingsley, but also from, among others, scriptwriter John Logan (efficient in distilling Brian Selznick’s 533-page picture-book novel from 2007, The Invention of Hugo Cabret), cinematographer Robert Richardson (adept at capturing both awesome vistas and inspective tight shots alike) and longtime Scorsese editor Thelma Schoonmaker (integral to the director’s often languid yet ever upbeat narrative pace).

Fifth, the film’s main star shines through: not Butterfield (who was also the lead in a previous drama, The Boy with the Striped Pajamas), not Kingsley nor even Scorsese (both gentlemen prove that senior citizenship need not spell retirement hell), not even the curious automaton with the heart-shaped keyhole that is the movie’s centerpiece. No, Hugo’s main star is cinema itself.

As Selznick’s book progresses into a homage to French “cinemagician” Georges Méliès, Scorsese takes this great opportunity to honor the dawn of moviemaking with salutary references to a bounty of motion picture artifacts. These include Méliès’ 1902 classic A Trip to the Moon, the first special-effects flick; the Lumiere brothers’ 1897 work Arrival of a Train at La Ciotat, 3D’s greatest of great ancestors; the 1903 Western The Great Train Robbery; the Harold Lloyd starrer Safety Last!, via actual footage and then a remaking of its iconic hanging-by-a-clock’s-arm image; and even, indirectly, Charlie Chaplin’s Modern Times, what with the many shots showing intricate clockwork mechanisms up close.

Most of all, Hugo is best seen as a sweet love story—of Scorsese grandly, yet not vainly, professing why he loves movies and why the rest of us do, too.

In the way Hugo gingerly unfolds almost like a flower blossoming into natural splendor, in the way the film highlights the point that people, like machines, have a unique purpose in the world, in the way it suggests that man plus machine equals movies—or, even better, that man plus machine equals magic—and in the way it dramatizes that quiet courage in the face of towering adversity is instrumental to one’s happiness as much as passion is, Scorsese delivers not just a movie but a work of art that holds rewarding surprises. 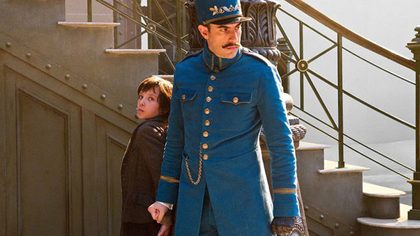