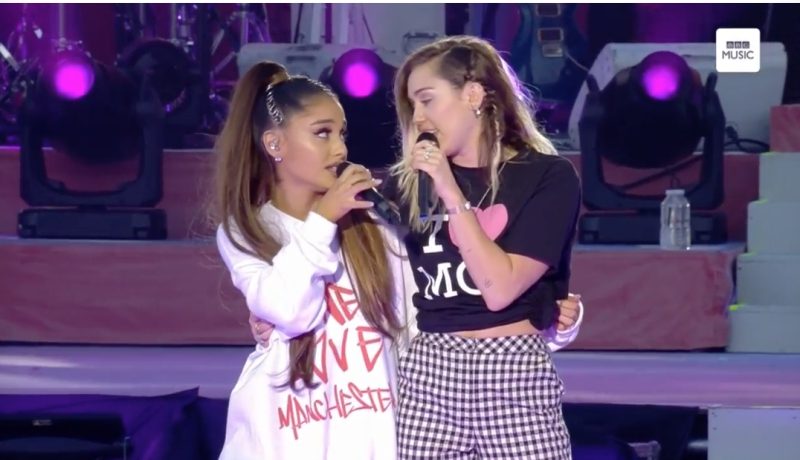 Take That, Liam Gallagher, Coldplay, Miley Cyrus, Pharell Williams, Katy Perry, and many more gathered the Emirates Old Trafford in Manchester on Sunday, June 4 to raise funds for the victims of the terror attack that happened after Ariana’s concert on May 22.

Some of the highlights and most emotional moments of the show included Ariana’s duets with other artists.

Here are some of the moments during the show that had us smiling or crying – or both.

“Where is the Love?” – Black Eyed Peas

Ariana teamed up with the Black Eyed Peas to perform “Where is the Love?” at the concert. The song has become the anthem of many, following the attacks around the world.

Miley and Ariana first released their cover of this song in 2015 for the benefit of Miley’s Happy Hippie Foundation. They sat at the steps of the stage in Manchester, mirroring their first performance, but this time in heels rather than animal onesies.

Coldplay dedicated Oasis’ “Don’t Look Back in Anger” to Ariana, who they praised for putting the event together.

Following the attack, “Don’t Look Back in Anger” was spontaneously sung by a crowd in Manchester at a tribute to those who died.

Some of the cute, lighter moments of the show involved Ariana performing with her boyfriend Mac Miller. Aside from “The Way,” they also performed his song “Dang!”

The couple has also collaborated on the song “My Favorite Part,” which is part of Mac’s album The Divine Feminine. (WATCH: Ariana Grande, Mac Miller team up in ‘My Favorite Part’ music video)

Imogen Heap was one of the artists who surprised the crowd with a performance that night. “Manchester, I love you so so much, thank you so much. I wanna take a moment to introduce the next performer who’s been my idol since I was 11 years old,” said Ariana, introducing Imogen, who sang “Hide and Seek.”

Liam Gallagher was another surprise artist. He sang Oasis’ “Live Forever” with Coldplay.

Ariana ended the concert with “Somewhere Over The Rainbow.” She choked up towards the end of the song and had to pause and compose herself before singing the last few notes.

What was your favorite performance at the concert? Let us know in the comments below! – Rappler.com