Of love songs and love stories MANILA, Philippines – A long time ago, a young songwriter put words to paper to song. And he sang his heart out.

He was little known when we met. He asked me, and many more, to listen. He had songs to play. He put his heart on display. And the few of us, so few in the beginning, fell in love with his music.

It took a while, but one day almost every one began laying claim to his stories as theirs.

The country soon discovered Ebe Dancel, he who would tell the story of the pining, the rejected, the broken hearted, the hopeful, the romantic. He truly has struck a chord with the Filipino heart.

Writing and fronting for what became one of the most popular bands in Filipino recent music history, Sugarfree, Ebe gave us his stories on love and life for many years and through several chart-topping albums.

Even at a tender age, such naked emotions elicit the kneejerk I-know-how-that-feels reaction. And it seems, nothing has changed. If anything, it is what makes Ebe what he is, when it comes to his songs.

“They were thoughts that became songs. I use words to hide the identities of the people I’d talk about. So far, no one’s come up to me and said ‘You asshole!’ pa naman.” he laughs. “You always write about what’s in your heart, and I was afraid that if I started filtering, then the process wouldn’t have been as sincere.” 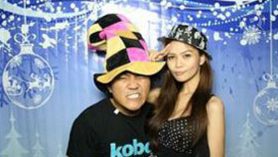 Ebe has gone solo with his career now, opting to turn away from the band setup. It was a big change for everyone – for the fans, the band, himself.

When he told me about leaving Sugarfree the first time, I knew that it was time.

Some things need to change. We have gotten busy with separate lives for some time now and didn’t really have opportunities for catching up. But had I paid closer attention, I would have known that this former lovelorn fellow has found love.

“I knew of the band and loved the music prior to us meeting, but I didn’t know it was him,” Nikita recalls. “I found out about a week or two later that he was in a band. So I asked him what his band was called and he ducked answering the question. I don’t remember how exactly, but I remember he did it cleverly. You can imagine how embarrassed I was when I found out from a friend of mine.”

What now? This has changed everything. Who will make our write the bittersweet tales that make us go, ‘Aww’ and ‘Ouch’ and ‘Oh, yes, that’s exactly how I feel’? The guy has found the love of his life. They actually got married.

Not really. The songs kept coming. And for once, we knew whom Ebe’s been writing about.

“His life tends to find its way into his songs, so our story pops up in a lot of them,” Nikita says.  “Off the top of my head there’s ‘Mornings and Airports,’ having to say goodbye so often when you’re a touring musician or married to one; ‘Hangover’ love is an addiction, ‘Wala nang Hihilingin’, written when he found me asleep on the couch’, and ‘Lapit’.”

When Ebe released his solo album months ago and many wanted to know if it would sound like Sugarfree still.

I wanted to know what a man in love would put out. What do you create when the drama is gone?

It starts not very promising. “I’ve been trying not to write love songs, because I’ve already written too many of them,” Ebe starts.

“I obviously can’t write the way I used to when I made those heartbreak songs and strung them together to come up with the (old Sugarfree albums).  I feel that to this day, some fans expect me stay that way,” Ebe admits. “But just like everyone else, I’ve learned to move on.  I’m in a different place now, and I like talking about that. We spin along with the world. I’ve learned so many things the past few years, and I try to apply them to my situation now, to the way I treat people, to the way I write, and ultimately, to the way I think. My heart is still on my sleeve, but I like talking about the different aspects of love now. Not just heartache and pain, but finding someone and something that motivates you to be a better person. “

Our romantic, he’s still there. I doubt he can help it. Thankfully, for prying ones like myself, I get to ask an insider about what it’s like to be married to someone who has made a career exposing and channeling emotions.

“I guess he has an easier time being vocal about his feelings and he does say the sweetest things. But it’s not just that. I mean, sometimes he is kind of cheeky. We’ve developed our own language, sort of, so he could say something that would sound sweet or totally make no sense to someone else, when he is actually poking fun at me, in a way of paglalambing, of course. ”

And there is my answer. From one who was looking for love to one who is strengthened by love.

“I’ve always written about anything that comes to my mind,” Ebe declares.  “Sometimes I feel like there are 10 televisions in my head and they’re all on different channels, so I try to write about everything in my head. Fortunately, my brain isn’t very big. Whenever i think about Nikita, though, something good always comes out of it. Lucky guy is me.”

And lucky hangers-on are we. – Rappler.com 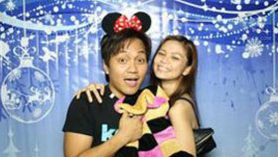