Aug 28, 2017 1:13 PM PHT
Rappler.com
Facebook Twitter Copy URL
Copied
'You are not alone. There is always a way forward. Reach out, share your thoughts, do not give up,' the actor and singer also tells those with depression 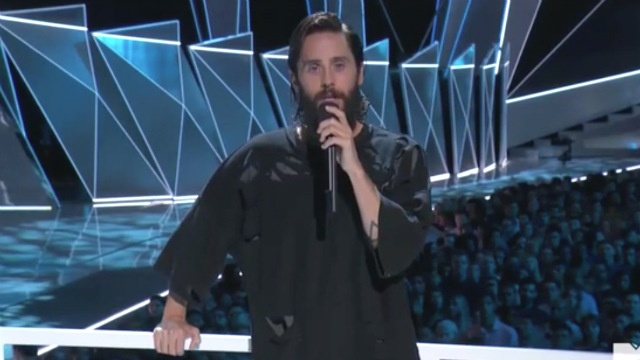 In his speech, Jared recalled meeting the two singers, whom he toured with. He also talked about their friendship.

“They were close friends with one another, Chester even singing a cover of the classic ‘Hallelujah’ at Chris’ funeral. Chester said of Chris, ‘Your voice was joy and pain and anger and forgiveness, love and heartache all wrapped up into one.’ Just weeks later, Chester himself was gone,” Jared said.

Jared said he will always remember Chester smiling, and that his late friend’s voice will live on. He also reached out to those who are struggling with depression, telling them they are not alone.

“If there is anyone out there who is watching this tonight who feels like there is no hope, hear me now, you are not alone. There is always a way forward. Reach out, share your thoughts, do not give up, and I promise you this: The absolute biggest breakthroughs in life lie just beyond the darkest days,” Jared said.

Chris, vocalist of the group Soundgarden and Audioslave, died at the age of 52, also due to suicide. – Rappler.com