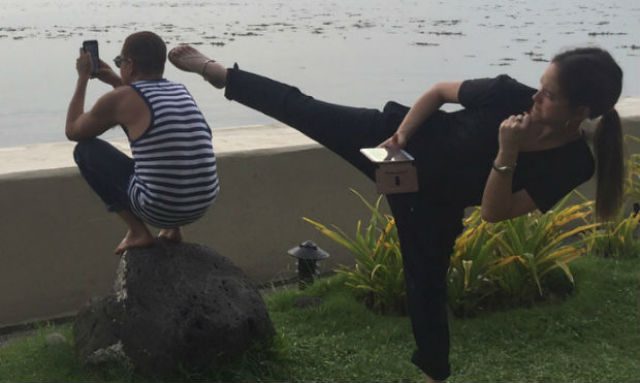 MANILA, Philippines – After it was announced that he was taking time off from his showbiz commitments, John Lloyd Cruz flew out of the country for a much-deserved break in Morocco. But he was not alone – he was spotted with rumored girlfriend Ellen Adarna.

On Instagram, Ellen shared a couple of photos of them together. In one photo, she was pretending to kick John Lloyd to get his attention.

Ellen also posted photos of herself taken by the actor during their trip to Casablanca.

They also shared some scenic photos.

asked my cabbie to bring me to his neighbourhood

The two made headlines in September after photos of their vacation in Cebu went viral. In a now deleted post, John Lloyd said of Ellen:  “Sobrang baduy neto pero this girl really did something good to my soul. I’ll always be grateful.”

The two have yet to confirm the real status of their relationship, but many believe they are already together. Both are part of the show Home Sweetie Home.

John Lloyd did not appear on the Star Magic Ball red carpet in September. He was, however, seen inside partying with the other stars. His last movie was with Sarah Geronimo, titled Finally Found Someone. – Rappler.com