TIMELINE: The glitz and glamor of Isabelle Duterte’s debut 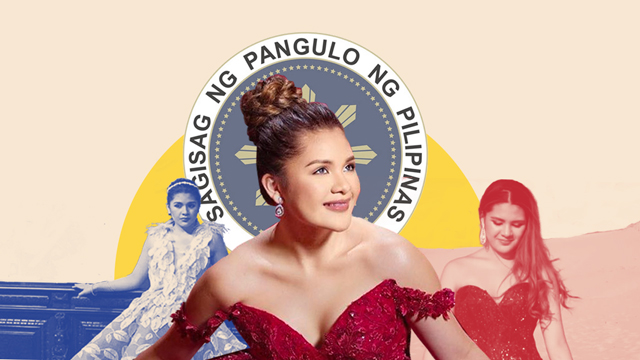 Isabelle, an up-and-coming showbiz personality, is known for her love of fashion, as she regularly posts her outfits of the day on social media. She is being managed by Annabelle Rama, the mother of showbiz personalities Ruffa Gutierrez and twin brothers Richard and Raymond.

Before her grand debut, here’s a wrap-up of everything that have led to the big event at The Peninsula Manila.

December 15 – Isabelle, daughter of President Duterte’s eldest son, resigned Davao City vice mayor Paolo Duterte, with his ex-wife  Lovelie Sangkola Sumera, make headlines as photos of her pre-debut photoshoot at Malacañang circulate online. Some of the photos show her posing next to the presidential seal, which only the President and Vice President are allowed to use. (READ: When is it proper to use Malacañang, presidential seal for private purposes?)

Her photo shoot in Malacañang draws mixed reactions, with some calling her out for wearing expensive gowns and comparing her shoot to a time when the Marcoses would throw lavish parties at the presidential palace.

Malacañang defends the shoot, saying Isabelle’s pictorial should not be an issue.

December 22 – Isabelle and her father make headlines, with Paolo scolding her on social media. In a Facebook post on an account which has since been deactivated, Paolo writes: “Just because you were pimped twice by that person doesn’t mean I’ll keep my silence! And that mother of yours and tatay-tatayan (father-like figure) who is not concerned with you – well I’m not like them!”

His message is in reference to Isabelle’s tweets, wherein she accuses him beating up someone close to her.

Following the issue, presidential spokesperson Harry Roque says that in due time they hope the two will talk and reconcile.

In addition, some of Isabelle’s photos are also released. One of the photos shows the iconic Sydney Opera House on the background.

#Bellessima18 at the Iconic Opera House

The cosmetic doctor to the stars also shares two photos of Isabelle having her facial at the clinic.

Isabelle’s debut party is expected to have guests from politics and showbiz. Details of the event are coming out with Rita Neri’s Events company doing the planning, Jeff Galang as stylist, and Lito Sy as photographer.

Shop Smitten also shared that Isabelle will be giving her guests customized fragrances.