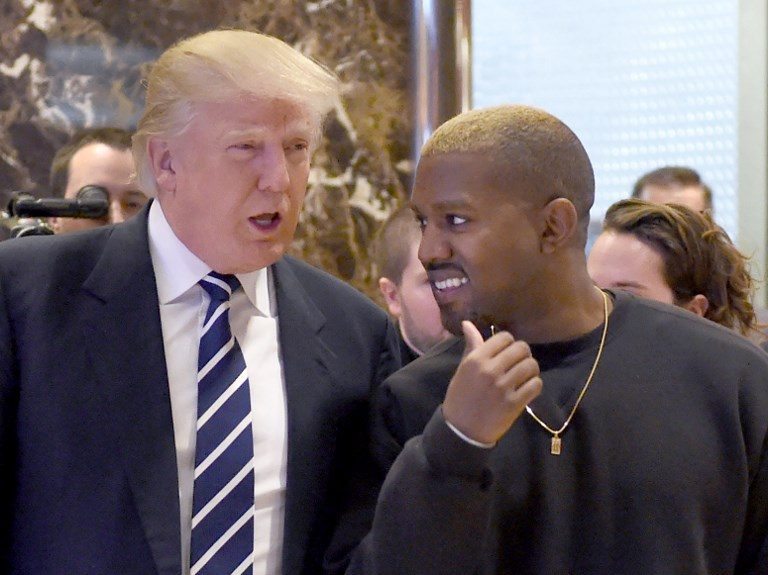 Facebook Twitter Copy URL
Copied
'You don't have to agree with Trump but the mob can't make me not love him,' Kanye tweets

NEW YORK, USA – Rap superstar Kanye West doubled down Wednesday, April 25 on his support for Donald Trump, tweeting his “love” for the president and flirting with his own political ambitions after his newfound conservatism raised eyebrows.

A master of staying in the spotlight, West last week returned to Twitter – his and Trump’s favorite platform – a year after vanishing when he canceled a tour and sought treatment for a mental breakdown.

In incessant, needling tweets much in the style of Trump, the 40-year-old rapper and designer announced two new albums, boasted of sales of his shoe line  –and voiced admiration for a conservative television commentator, Candace Owen.

After wide online criticism over his political leaning, West tweeted: “You don’t have to agree with Trump but the mob can’t make me not love him.

“We are both dragon energy. He is my brother. I love everyone. I don’t agree with everything anyone does. That’s what makes us individuals. And we have the right to independent thought.”

You don't have to agree with trump but the mob can't make me not love him. We are both dragon energy. He is my brother. I love everyone. I don't agree with everything anyone does. That's what makes us individuals. And we have the right to independent thought.

Trump, who rarely publicly salutes celebrities for their viewpoints, himself commented on a retweet of that missive, writing: “Thank you Kanye, very cool!”

West – who is highly unusual as both an African American and a celebrity to support Trump – added of Trump’s 2016 rival Hillary Clinton: “I don’t tell a Hillary supporter not to support Hillary. I love Hillary too.”

The rapper posted a picture of himself sporting a red cap with Trump’s trademark “Make America Great Again” slogan but also said his wife, socialite Kim Kardashian, wanted him to make clear he does not agree with Trump on all issues.

my MAGA hat is signed  pic.twitter.com/DrDHJybS8V

West renewed speculation that he will seek higher office himself, tweeting “2024,” a presidential election year.

Much like Trump, he also took issue with coverage of himself in the media, tweeting to the founder of celebrity gossip site TMZ, “Your (sic) hearing from your future president.”

West made his name for his self-reflective hip-hop on albums starting with The College Dropout but over the years has been increasingly outspoken in his views and actions.

His most visible first foray into politics came in 2005 when he said that then president George W. Bush “doesn’t care about black people” following the chaotic response to devastating Hurricane Katrina in New Orleans.

Shortly after the 2016 election, West expressed support for Trump on-stage and made a series of other bizarre statements including accusing rap mogul Jay-Z of trying to kill him.

He cut short his tour, with his representatives saying he needed therapy for a breakdown – but re-emerged briefly to meet the then president-elect at his Trump Tower residence. –Rappler.com