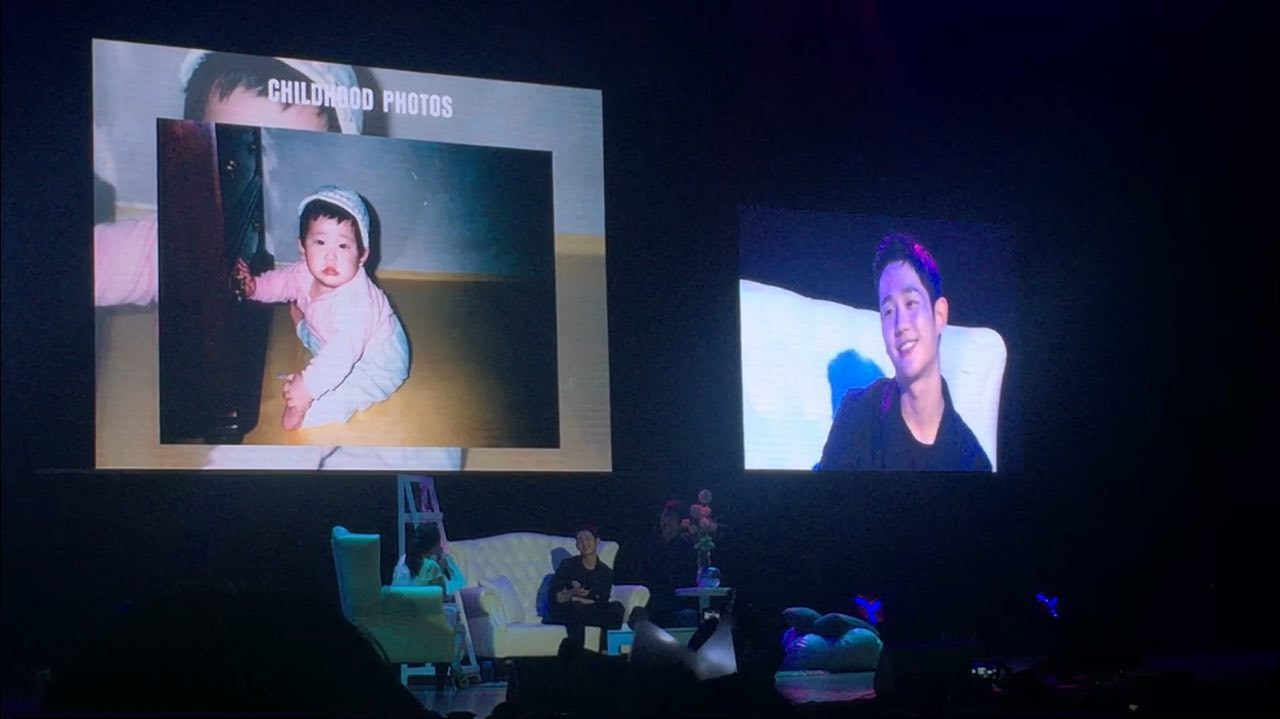 Hae-in, who most Filipinos know from Korean dramas While You Were Sleeping, Prison Playbook, and Something in the Rain (or Pretty Noona Who Buys Me Food), met his Filipino fans on Saturday and showed a side of him they don’t always see on-screen.

And the actor did not disappoint. For all the Hae-in fans out there – whether you saw him in person last night or were part of #TeamBahay – here are some of our favorite moments from his first fan meeting in Manila:

The fan meeting kicked off with a song number from Hae-in himself. Fair warning: with fans all too happy to see the actor in the flesh, there will be a lot of screaming in this short clip:

You can hear more of Hae-in’s singing voice in the clip below. During one of the games he played that night, he revealed that he likes singing over dancing:

Question: Annyeong oppa! I want to ask: What do you usually do when you’re bored or when you’re stressed?

He likes to eat delicious food and surround himself with people he is close to and people that he is comfortable with over a glass of beer.

Q: What are the qualities you’re looking for in a girl?

He wants a girl who takes care of herself, who loves herself, and who has a beautiful smile.

Q: What was your first impression of Manila?

We know that the weather here is very hot but he feels that the love you have for him, the passion that you have is hotter than the Manila weather.

Q: Hello Hae-in! What is your ideal date?

His ideal date is enjoying a glass of beer by the Han River, watching a movie, and it’s really just the little things.

Q: Would you and Sohn Ye-jin meet fans together in any city?

(Hae-in laughs before answering) He’s gonna ask Ye-jin when he goes back to Korea.

Follow-up: Would you be open to coming back to Manila with her?

If it’s possible, of course, why not, he would like to meet all of you guys again with her.

Q: Do you think it’s possible to fall in love with a fan?

Do you think it’s possible to fall in love with a fan? Hae-in says OF COURSE! #SarangHaeInManila pic.twitter.com/cbgBKfALU7

What’s it like to get a gift from Hae-in himself? Ask these lucky fans, who not only received gifts from the actor, but even got to see him up close onstage:

The second person to get a signed poster from Hae-in is a fanboy! #SarangHaeInManila pic.twitter.com/zSdySPDlfn

Oh, what a fan would do for a photo with their favorite celebrity.

In this case, 6 fans played games with Hae-in for a chance to get a polaroid photo with the Korean star. During the games, we learned that Hae-in takes basketball and jenga seriously.

The first game is basketball. Hae-in is surprised that both fans are good at basketball. #SarangHaeIn pic.twitter.com/cuzkFFTWYe

Intense jenga game is intense. Hae-in himself helps the fan during the game. #SarangHaeInManila pic.twitter.com/4IFNz3qWFd

In the end, he indulged all 6 of them and took individual photos onstage. You get to play with Hae-in AND take a photo with him? Now that’s a treat! Up close and personal

But what fans will probably remember the most were the moments when Hae-in answered personal questions about his life, his childhood, his dreams, and his future plans.

His fans also prepared something special for the actor:

Hae-in looks on as he watches the videos made by his fans. The shadow is a reference to one of his scenes in While You Were Sleeping. #SarangHaeInManila pic.twitter.com/Bp4cNER62U

At the end of the fan meeting, Hae-in, who likes writing journals, read this letter to his fans:

Hae-in reads a letter to the audience at the end of the fan meeting. #SarangHaeInManila pic.twitter.com/n3EQl3HJzZ

I am so nervous and excited to write down this letter and thinking [of reading] this in front of many Filipino fans. I don’t know how to start because I have so many things that I want to tell you. First of all, I really appreciate and want to remember forever all of you showing love for me, sharing same time and same place together with me. I feel so lucky whenever I see you supporting me and feeling happy to watch me acting. I dream all the time, every day, and it’s the moment that I achieve my dream. Thank you so much for sending unconditional love and support for me who is not good enough yet.

[Lastly], I want to tell you this: I respect and love my fans.

What’s your favorite #SaranghaeInManila moment? Let us know in the comment section below! – Rappler.com