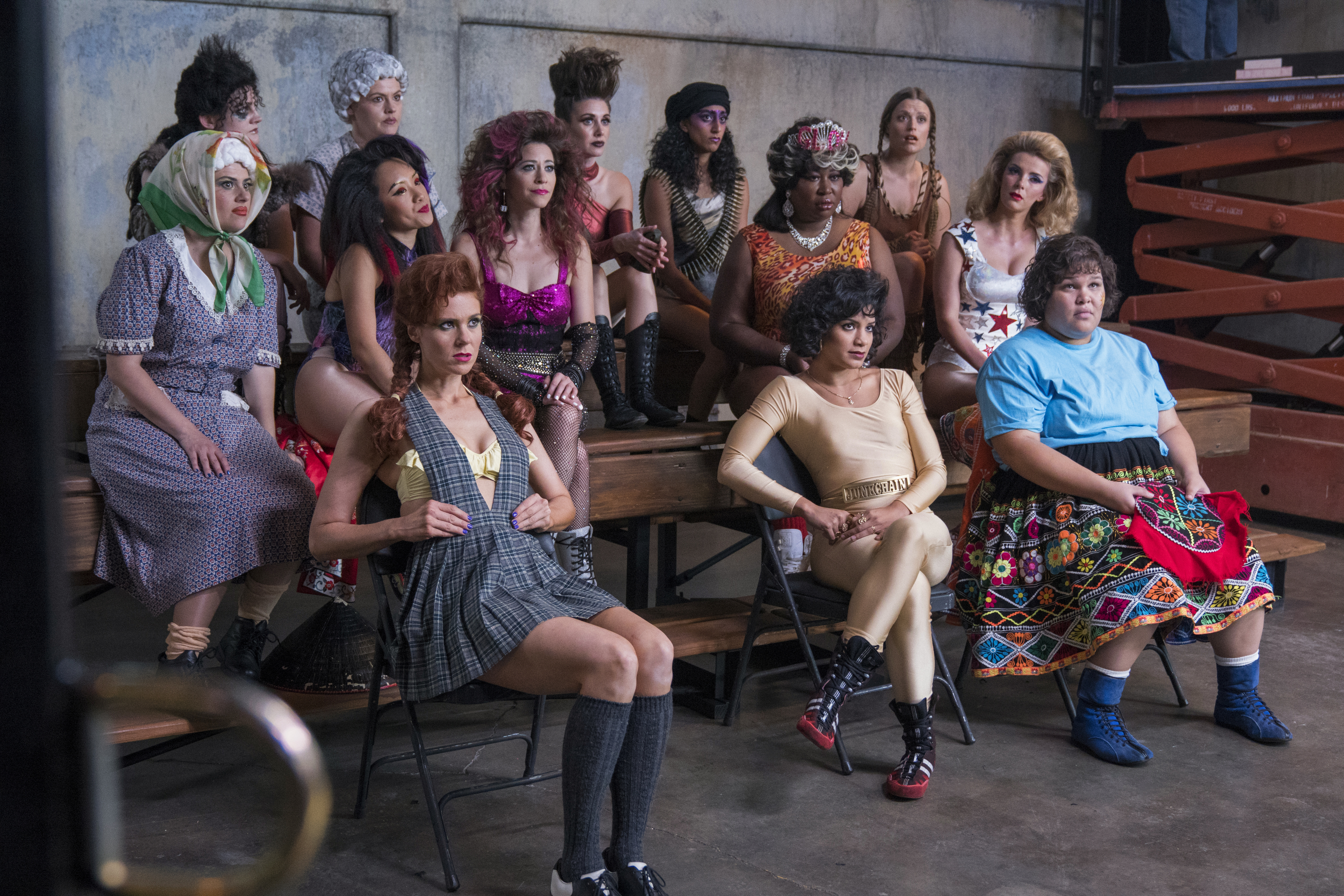 MANILA, Philippines — GLOW is a great, spandex-clad romp that does justice to the 1980’s women’s wrestling promotion that the show is loosely based on.

The women who joined the original Gorgeous Ladies of Wrestling came from a myriad of backgrounds (mostly dance and stunt). The roster of wrestlers in GLOW is just as diverse.

Co-executive producer Jenji Kohan has extensive experience in putting together a motley crew of characters in a high-pressure environment — she’s also the creator of Orange is the New Black.

But while OITNB presented ever-shifting alliances and inner politicking, the wrestlers in GLOW mostly have each other’s backs. Operative term: mostly. 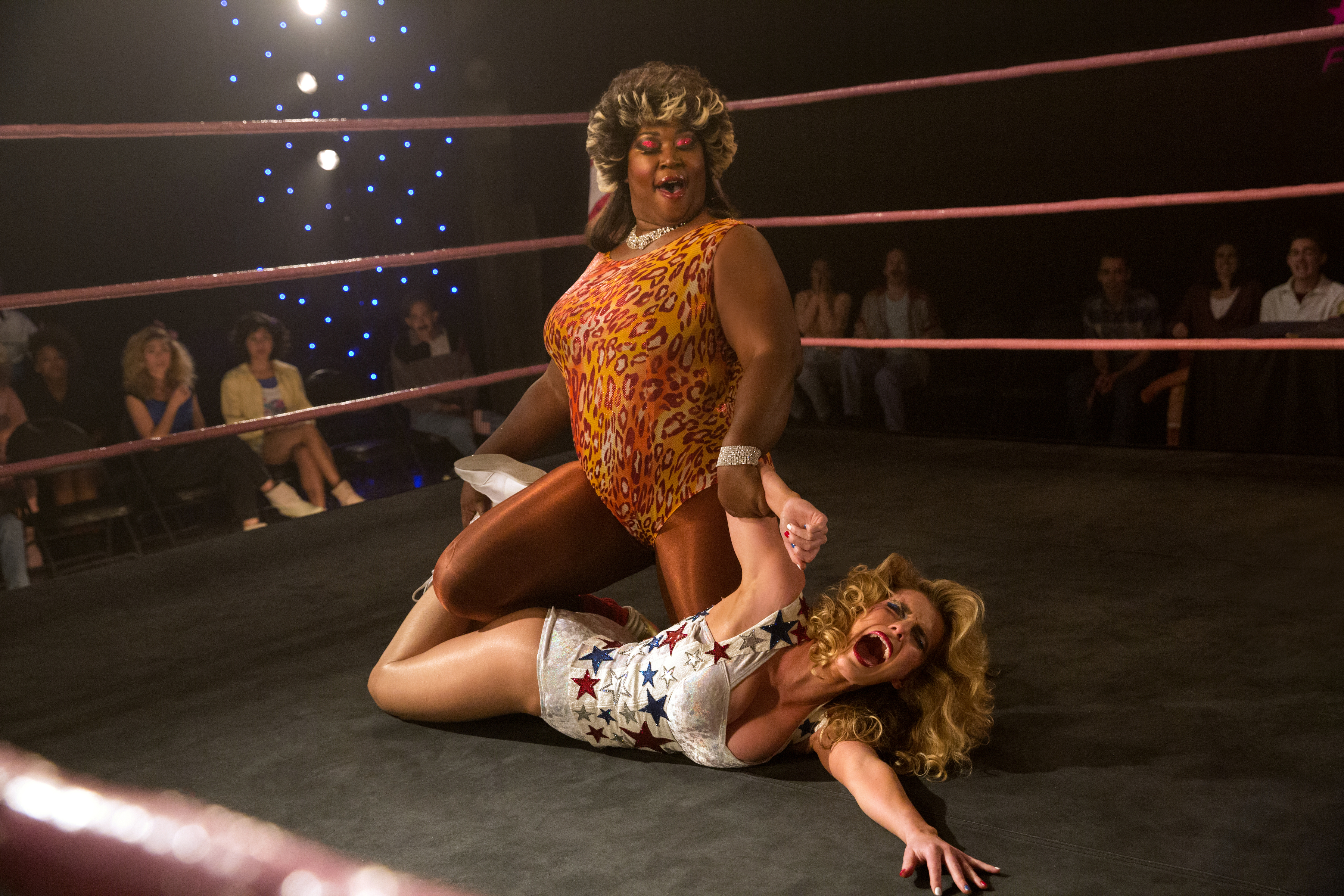 Towards the end of season 1, the rift between Ruth/Zoya the Destroya (Alison Brie) and Debbie/Liberty Belle (Betty Gilpin) had mended somewhat. In season 2, they’ve settled into a professional relationship that could be described as “functional.”

Ruth becomes the de facto assistant director of their show, much to the annoyance of director Sam Sylvia (Marc Maron, who does an admirable job of making his cokehead curmudgeon character almost lovable.) Sam often stresses over the production aspects of the show, and has no choice but to let Ruth make some of the creative choices.

Debbie, on the other hand, goes straight to K-DTV executive Glen Klitnick and negotiates for a producer credit. This catches Sam and co-producer Bash (Chris Lowell) off-guard, and neither are keen on letting a girl into their private boy’s club. But to Debbie, her position is anything but symbolic.

She prepares working dinners (where no one shows up) and pitches ideas (that neither Sam nor Bash want to hear). It’s an uphill battle made worse by her crumbling marriage, which is the fallout from Ruth’s affair with her husband.

Professional wrestling may be fake, but the pain these athlete-slash-entertainers go through can get pretty real. And I’m not just talking about concussions, broken legs (more on that later), or bruised egos.

GLOW does a great job of showing the struggles these ladies constantly face.

The show also explores casual racism through the characters of Tammé/Welfare Queen (Kia Stevens), Jenny/Fortune Cookie (Ellen Wong), Arthie/Beirut the Mad Bomber (Sunita Mani). For the upcoming season, Arthie plans on blowing up her old persona, out of which will rise her new character, Phoenix.

But the Beatdown Biddies steal her plans and pitch their metamorphosis into the Toxic Twins to Sam. Arthie tries to pitch the Phoenix idea, but Sam brushes it aside, saing there can only be one character change event during the show.

Tammé in particular has a pretty heartbreaking scene midway through the season. Before her much-anticipated rematch with Liberty Belle, she makes a 12-hour drive to visit her son Ernest, a Stanford scholar. Ernest thinks his mom is an audience coordinator for Family Feud, but learns about her wrestling gig when a couple recognizes Welfare Queen on campus.

Ernest’s concern that Tammé is taking part in a minstrel show isn’t assuaged when he watches the match that evening. Liberty Belle bathes in the adoration of her crowd, while Welfare Queen is ridiculed. Ernest considers the spectacle offensive, but is nonetheless impressed by his mother’s physical strength.

In the ring, there are plenty of body slams and kayfabe confrontations, but GLOW’s true conflict comes from without. The show may take place in the 80s, but it tackles a few issues that, unfortunately, remain relevant to this day.

Even the #MeToo movement gets referenced this season. The network head of K-DTV (who Glen refers to as an artist) requests a private meeting with Ruth to discuss the show. Except he doesn’t really want to discuss the show. He asks Ruth to try her wrestling moves on him, and uses the opportunity to make inappropriate contact. He prances into the bathroom to prepare the jacuzzi, but Ruth storms out of the room. The scene recalls the allegations pitted against Harvey Weinstein. The former Hollywood mogul isn’t just a sleazebag and accused sex-offender; he’s become a legit television trope.

The End is the Beginning

As a result, the show’s time slot gets moved to 2 am — a virtual death sentence for the already-struggling show. Instead of supporting Ruth, Debbie berates her for not having taken one for the team.

It’s an interesting contrast to Sam’s reaction to the network head’s harassment. At first, the show’s timeslot change weighed heavily on Sam. It wasn’t about the failure, which he claims to be used to. He simply couldn’t figure out why the show was moved. When Ruth tells him why, he immediately sides with her (going so far as to smash the network head’s windshield later on).

The revelation also puts things into perspective, and Sam calls it “the best news I’ve heard all week.”

Sam’s character development is one the most satisfying things this season. He started out as this hostile, has-been filmmaker. He’s still hostile, but he gradually learns to trust Ruth, and even Debbie. Sam even begins repairing his relationship with his estranged daughter Justine (Britt Baron), who he almost made out with, before knowing that she was his daughter.

Even Ruth and Debbie get some much-needed closure. Before her match with Ruth, Debbie snorts some of Sam’s cocaine. As a result, she torques a leg submission a little too far and ends up breaking Ruth’s leg. The entire crew, save for Debbie, accompanies Ruth to the hospital. Debbie eventually shows up, and she and Ruth finally explode. It’s good for these two to finally unload all the toxic miasma that had been fermenting between them since last season.

After the climactic match of season, the crew learns that they can’t transfer to a new TV network  — the girls signed off their rights to their characters. But the show is saved when one of Sam’s contacts, a strip club owner, volunteers to finance a live wrestling show… in Las Vegas, baby.

The contracts they signed didn’t cover live shows, and the girls can continue wrestling as the persona’s they’ve created. They all pile into a bus, and head for a brighter future. Will they achieve mainstream success?

Only Vegas, and the next season, can tell. — Rappler.com