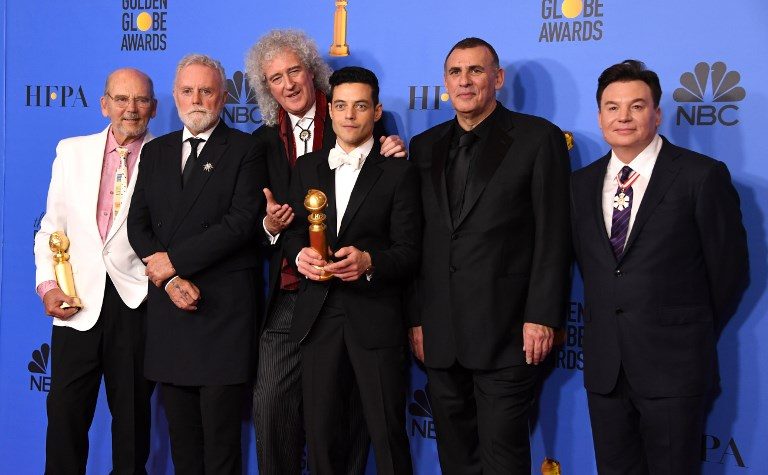 LOS ANGELES, USA – Bohemian Rhapsody pulled a major upset at the close of the Golden Globes on Sunday, January 6 taking home the final two top prizes to put itself into the Oscars conversation along with Green Book and Roma.

On a night of wins for movies representing minorities, two awards favorites about white people – Dick Cheney biopic Vice and musical romance A Star is Born – all but struck out, with each picking up just one trophy in the run-up to the all-important Oscars on February 24.

“I am beyond moved. My heart is pounding out of my chest right now,” said Malek, whose list of people to thank included the Queen singer, who died in 1991.

“Thank you to Freddie Mercury for giving me the joy of a lifetime. I love you, you beautiful man. This is for and because of you, gorgeous.”

The two trophies were the final prizes in a ceremony that had been expected to be a consecration for A Star is Born – starring Lady Gaga and Bradley Cooper in the age-old Hollywood fable of an ailing performer and his muse – which went into the night with 5 nods.

Star had to content itself with a statuette for best song, which went to Gaga and writing partner Mark Ronson, while Christian Bale – who plays Cheney – picked up the solo gong for Vice.

The boozy gala at the Beverly Hilton also recognized Alfonso Cuaron’s Roma, a cinematic ode to his childhood in 1970s Mexico City, with best director and foreign film honors, while seven movies bagged one statuette each.

“Cinema at its best builds bridges to other cultures,” Cuaron told the audience. “We need to understand how much we have in common.”

Many wore “Time’s Up” bracelets in a nod to the movement for sexual equality in the workplace that grabbed the headlines 12 months ago as the industry faced a reckoning about rampant harassment and abuse.

Hosting the Globes were comedian Andy Samberg and actress Sandra Oh, who made history as the first Asian woman to have presented a major awards show while also taking home her second Globe for Killing Eve.

As the only awards show where alcohol is served, the evening is usually more colorful than showbiz’s other big nights.

But the presenters set the tone for a less edgy affair than in previous years with a relatively tame opening that gave more time to complimenting the nominees than assailing them with “roast”-style jokes.

Samberg paid tribute to the diversity among the slate of films up for awards, singling out “If Beale Street Could Talk,” whose star Regina King took home best supporting actress honors, as well as “Black Panther” and “Crazy Rich Asians,” which went home empty-handed.

“And they are not just here tonight because they resonated with audiences Hollywood often ignores,” he said.

“They are here because they told stories that resonated with everyone. And that is truly a beautiful thing.”

King vowed that, for the next two years, she would only produce projects that employ 50 percent women, exclaiming: “Time’s Up times two!”

This year, the Globes come at the start of voting for Oscar nominations, and while they are not always a clear predictor of Academy Award success, they are a bellwether of momentum.

In the acting categories, Glenn Close (“The Wife”) bested the favorite Lady Gaga on the drama side.

Olivia Colman, who plays Queen Anne in offbeat royal romp “The Favourite,” and Bale won as expected in the comedy acting races.

“Thank you to Satan for giving me inspiration for playing this role,” deadpanned Bale.

Christian Bale made sure to thank Satan during his #GoldenGlobes acceptance speech: pic.twitter.com/DU3cq1cKUf

Bradley Cooper – who plays the aging rocker opposite Gaga’s singer in “Star” – had been favorite for best actor in a drama but was edged out by Malek.

The television side of the Globes can feel a bit redundant coming so soon after the Emmys in September, with many of the same nominees as the Television Academy field.

But adding spice to the mix on Sunday are programs that aired too late for Emmys contention.