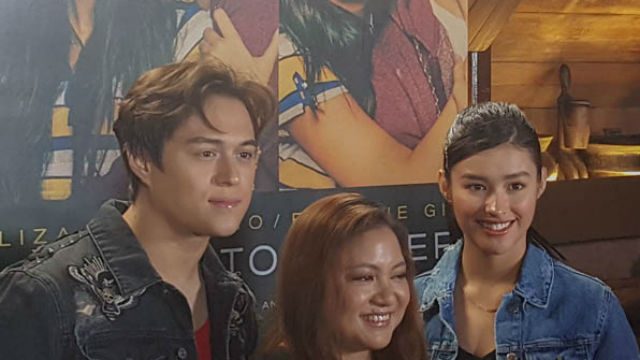 MANILA, Philippines – When you’re part of a love team that’s as popular and as in-demand as LizQuen (Liza Soberano and Enrique Gil to the uninitiated), it’s not unusual to get pitches left and right. But there was one particular pitch that got the two hooked.

Months later, the pitch is now a movie that’s got both casual and hardcore fans hyped: Alone/Together.

At a press conference for the movie, Enrique said when they read the script, they loved it and wanted to do it, even if it didn’t have an ending yet.

(We were getting a lot of pitches. And then someone presented director [Antoinette Jadaone]’s script and we started reading it over the phone. After that… it didn’t have an ending yet, so we asked ourselves: what happened? We texted each other and agreed it seemed to be a good story, but what happens next? Instead of saying ‘okay,’ we want to know what happens next.)

Alone/Together, the pair’s return to the big screen, is written and directed by Antoinette Jadaone, best known for That Thing Called Tadhana, Never Not Love You, and Love You to the Stars and Back.

Enrique said Antoinette’s pitch for the movie was ultimately about what was true and what was real. “I think people go through [it] everyday. Even me, when I was young, I had a dream of what I wanted to be when I grow up and it’s not this. But this is my where I am, this is my career, and I love what I do,” he said in a mix of English and Filipino.

The movie, said the two, was a departure from the romcoms they’re used to doing. The movie’s trailer hints at a film that traces how their characters fall in love and break apart during their undergraduate years. Years later, visibly older and more world-weary, they meet again and must figure out how their relationship can work.

“Like what Quen said, when we read the story, wala pa siyang (there was no) ending. And it’s completely different from anything else we’ve ever done.

Jadaone, whose 2018 movie Never Not Love You showcased another popular love team (James Reid and Nadine Lustre) as they navigated the difficulties and vagueness of love, said Alone/Together shows a “different face” of today’s youth.

“I think it is relevant because ibang mukha siya ng youth,” Antoinette said.

“Iba siyang mukha ng kabataan na parang the youth are usually portrayed as mahilig sa social media… But actually, parang we only think so little of the youth pero they can do so much. So this is a movie na parang will tell us na the youth is still really our future.”