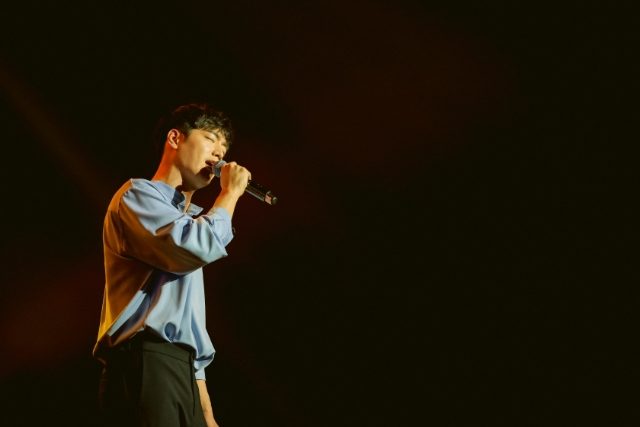 MANILA, Philippines – Korean actor Seo Kang-jun visited the Philippines for the first time last weekend to meet his Filipino fans, many of whom fondly call him Nam Shin as it sounds similar to “namchin,” the Korean slang for boyfriend (namja chingu).

Nam Shin, of course, is his character in popular Korean drama Are You Human Too. Kang-jun was also in town to promote the drama, which started airing on GMA7 this week.

But the highlight of his trip was still the two-hour fan meeting last Saturday, May 25, at the New Frontier Theater (formerly KIA Theatre). The 5urprise member kicked off the event with his song “You Are My Love,” which is part of the Are You Human Too soundtrack.

Seo Kang-joon opens the fan meet with a song and a greeting! #SeoKangJunInMNL #rappler pic.twitter.com/uRY2tGSSvD

After his first greeting, Kang-jun went on to play a couple of games with lucky fans. The fans had to beat Kang-jun in the games if they wanted to win special rewards – as if playing with the man himself wasn’t reward enough?

The first game is ring toss. Winner of the first game got to stare at Kang-joon's eyes for 10 seconds! #SeoKangJuninMNL #rappler pic.twitter.com/PzXkt6rgS3

Kang-joon wins the stack attack game but the fan still gets a signed CD from him! #SeoKangJunInMNL #rappler pic.twitter.com/9Cpnzg5VZR

Kang-joon smiles as he watches the winning entry of one of the online games! #SeoKangJuninMNL #rappler pic.twitter.com/CDTyY1utMb

EARLIER: This lucky fan wins a game and gets to hug Kang-joon for 10 seconds! #SeoKangJunInMNL #rappler pic.twitter.com/RAWAJwi3u9

After the games, Kang-jun left the stage briefly and returned to serenade the fans with his rendition of “Thinking Out Loud.” Swoon!

Kang-jun then sat down with MYX VJ Sunny Kim – the host for the evening – to answer some questions.

“Of all the roles that you have played, which do you think is the most memorable and why?” Sunny said, starting off the short question and answer portion. Sunny also translated for the actor, who answered in Korean.

Kang-jun said the most memorable role he’s played so far is his characters in Are You Human Too because he’s always wanted to try playing two roles, and that the drama itself “brought about a very good message for everyone.” To prepare for the drama, Kang-jun said he had to study the movie A.I.

But the actor said he was able to relate more to his character Ohn Joon-young in the drama The Third Charm. He said the drama itself is relatable as it tackles topics such as love, growth, and pain.

“Usually, in dramas or TV series, the main character, they have ideal characteristics. They’re very handsome, usually always perfect. But the character in this drama is very normal, very ordinary, and is very relatable, so everyone’s gonna be able to relate to it,” Kang-jun said when asked what made this drama different. Kang-jun said he’s willing to work in the Philippines with Filipino actors if given the chance.

He also encouraged aspiring actors in the audience that night, saying he hopes to see them in an original Filipino Netflix film soon. Apparently, many actors and people around him have watched Filipino films that are currently on Netflix.

But the actor admitted that he cannot feel his popularity yet. He also admitted that fan meets could be burdensome for him because he wonders why his fans like him.

“He feels very pressured because he wonders why the fans keep supporting him, so every time he has fan meets like this he makes sure he performs for you and he prepares for the roles he’s about to play,” Sunny said as she translated Kang-jun’s answer.

On a lighter note, Sunny asked Kang-jun how he feels about his fans referring to him as their boyfriend.

“He’s thinking ‘di na siya p’wedeng magka-girlfriend kasi kayo daw lahat ang girlfriend niya (He’s thinking he can’t have a girlfriend anymore because you all are his girlfriend,” Sunny laughed as she translated Kang-jun’s answer. When asked if it’s okay for him, Kang-jun hesitated before answering “for now.”

Sunny also asked Kang-jun what he would be doing if he’s not an actor. The audience teased Kang-jun, saying he should be a chef or a dancer. Kang-jun played along and somehow danced with one of his fans onstage.

His fans ask him if he could dance and Kang-joon says yes! One lucky fan leads him in dancing #SeoKangJuninMNL #rappler pic.twitter.com/eW16ROwNFI

But his real answer? He would be working at a samgyeopsal place!

Cue the next portion of the fan meet: cultural exchange. For this part of the program, Kang-jun got to try some of the Philippines’ best dishes: empanada, lechon, and leche flan. Guess which one’s his favorite? It’s the lechon, of course!

Kang-jun also made his own sago’t gulaman, which two lucky fans got to taste.

As the fan meeting drew to a close, Kang-jun’s Filipino fans surprised him with a video and a cake.

He returned the love as he sang his last song, “Falling Slowly.”

“I hope you had a great time today. And I hope to see you again. Be healthy, and I’ll be back, alright? Mahal kita (I love you)!” Kang-jun said – with no translator this time – as he ended the night with a bow and a wave to the audience.