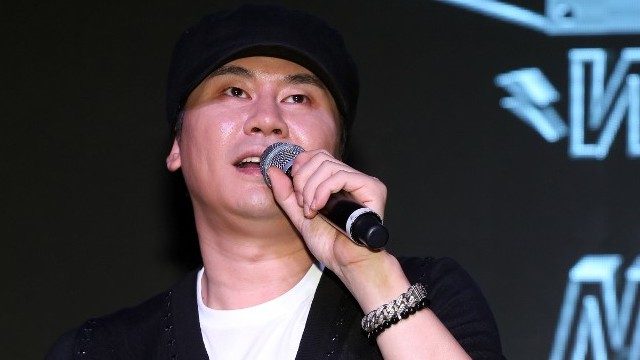 Facebook Twitter Copy URL
Copied
(UPDATED) 'I believe that the truth of the current media reports and malicious gossip will be revealed through investigations,' says the entertainment executive who has been accused of providing prostitutes to investors

MANILA, Philippines (UPDATED) – YG Entertainment founder Yang Hyun-suk has announced that he is stepping down from his position, amid controversies surrounding a number of the agency’s artists.

In a statement reported by Soompi, the entertainment executive apologized to fans of YG Entertainment celebrities, as well as the agency’s employees “who are silently continuing to do their work throughout the downpour of criticism.”

“For 23 years, I have dedicated half my life and everything to growing YG. The work of supporting the best music and the best artists was the greatest happiness for me. I have thought that this is the only ability I can contribute to fans and society,” he said, before announcing that he was stepping down from all of his positions at YG Entertainment.

“I sincerely hope that there is no further harm to the YG agency celebrities I love, and to the fans who love them, because of me,” he said.

He went on to say that there are more capable people at the agency, and his resignation “will be a good opportunity for them to exhibit their abilities better.”

He closed his statement by saying “Lastly, I believe that the truth of the current media reports and malicious gossip will be revealed through investigations.”

In a statement reported by Soompi, he said, “I am deeply ashamed of myself [when I think of] everyone feeling uneasy and worried due to all of the continuous and provocative issues that have been happening from the beginning of the year.”

He said that he and his brother have “silently endured” the speculations hurled against them “because we believe that the truth will surely come to light.”

However, he said that it has been hard to see the issues affect the celebrities under their agency.

“In order for [the company] to solve these current difficulties, grow, and prepare for a new breakthrough, I believe a big change is needed. And in order for there to be no misunderstandings regarding Yang Hyun Suk’s decision to step down, I think there needs to be a clarification on my part. After careful consideration in the midst of these situations, I have decided to resign from my long-held position of CEO at YG Entertainment,” he said.

YG Entertainment has been beset with controversy in recent months. Yang himself is being accused of providing prostitutes to investors from Southeast Asia in 2014.

One of YG Entertainment’s talents, Big Bang’s Seungri, has also been accused of providing prostitutes to investors of his nightclub, Burning Sun. The nightclub has since stopped operating, as it is being investigated for its involvement in drug distribution, sexual harassment, and rape.

Following the allegations, Seungri announced his retirement from showbiz in March.