IN PHOTOS: A good day with Park Bo-gum 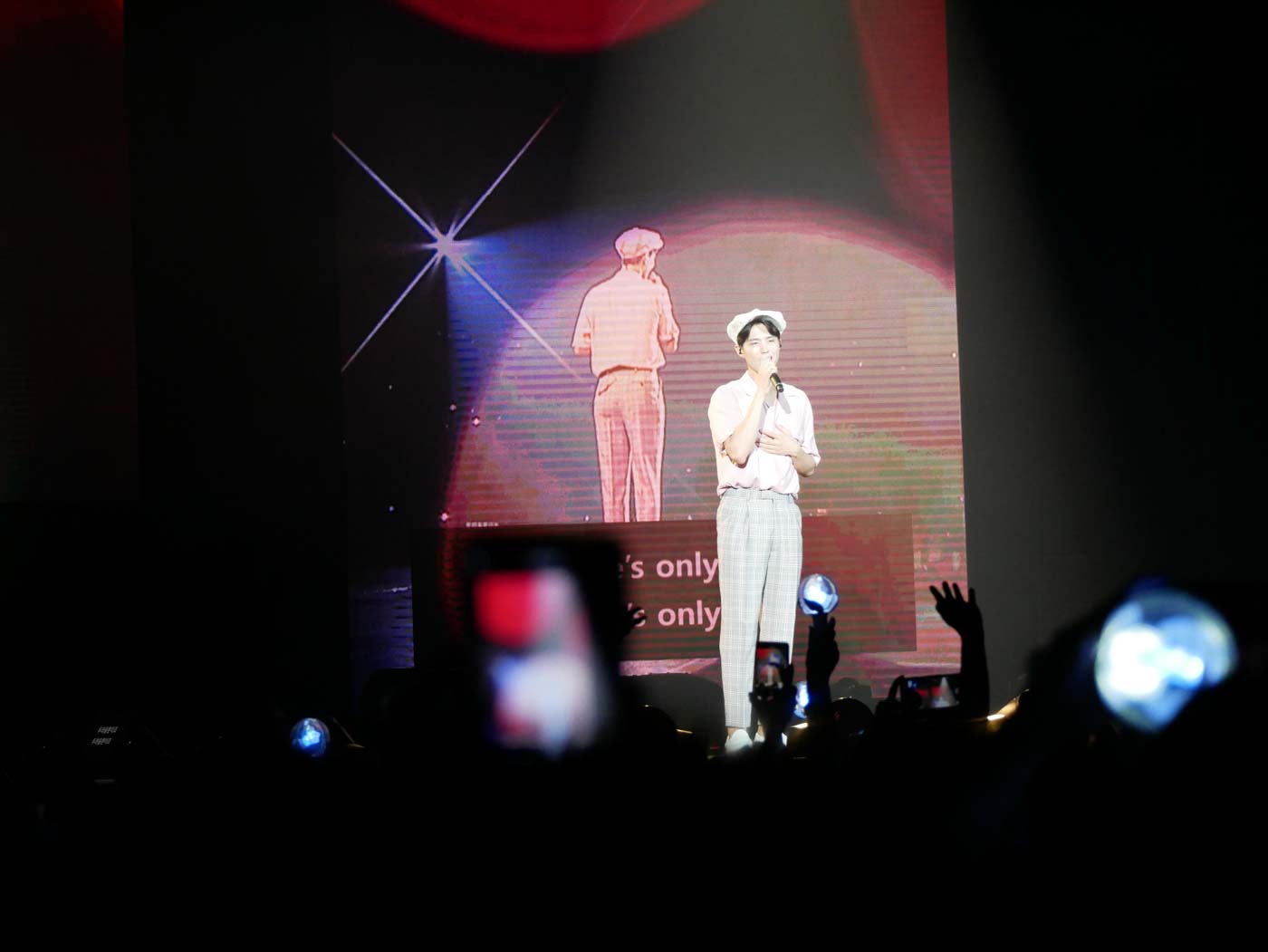 More than a week ago, this Ji Chang-wook loyalist found herself in a sea of deliriously happy Park Bo-gum followers who watched his fan meet May Your Everyday Be A Good Day at the Mall of Asia Arena.

I really didn’t plan on watching Park Bo-gum’s fan meet. But who in her right mind would turn down a free ticket to see one of Hallyu’s biggest stars? So, I went with my St. Theresa’s friends and after the nearly three-hour show and a hi-touch from South Korea’s “boyfriend,” I understood why at 26, Bo-gum has zoomed to superstardom.

Bo-gum is obviously a hardworking and dedicated performer. He made sure his audience would not be shortchanged—especially so that they had to wait for him for another two months. The fan meet was scheduled last April 27 but was postponed following the earthquake that shook Luzon days before that.

The Manila leg—co-produced by ABS-CBN Events, Ovation Productions, and Blossom Entertainment, his talent agency—was the last in Bo-gum’s Asia tour. Being last could have its pros and cons: either the artist would be exhausted by then or he would pull out all the stops because he’s savoring the moment as well. 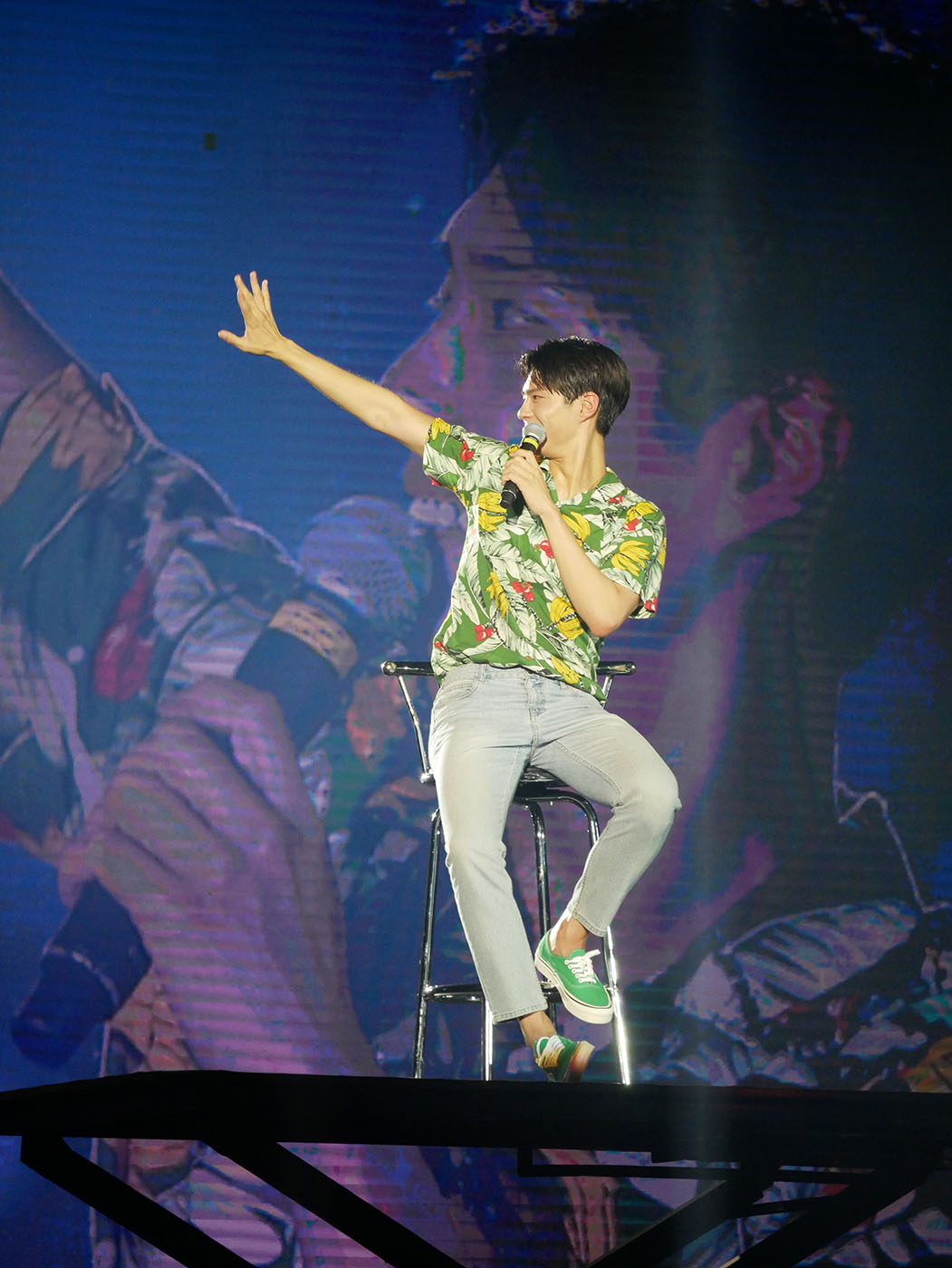 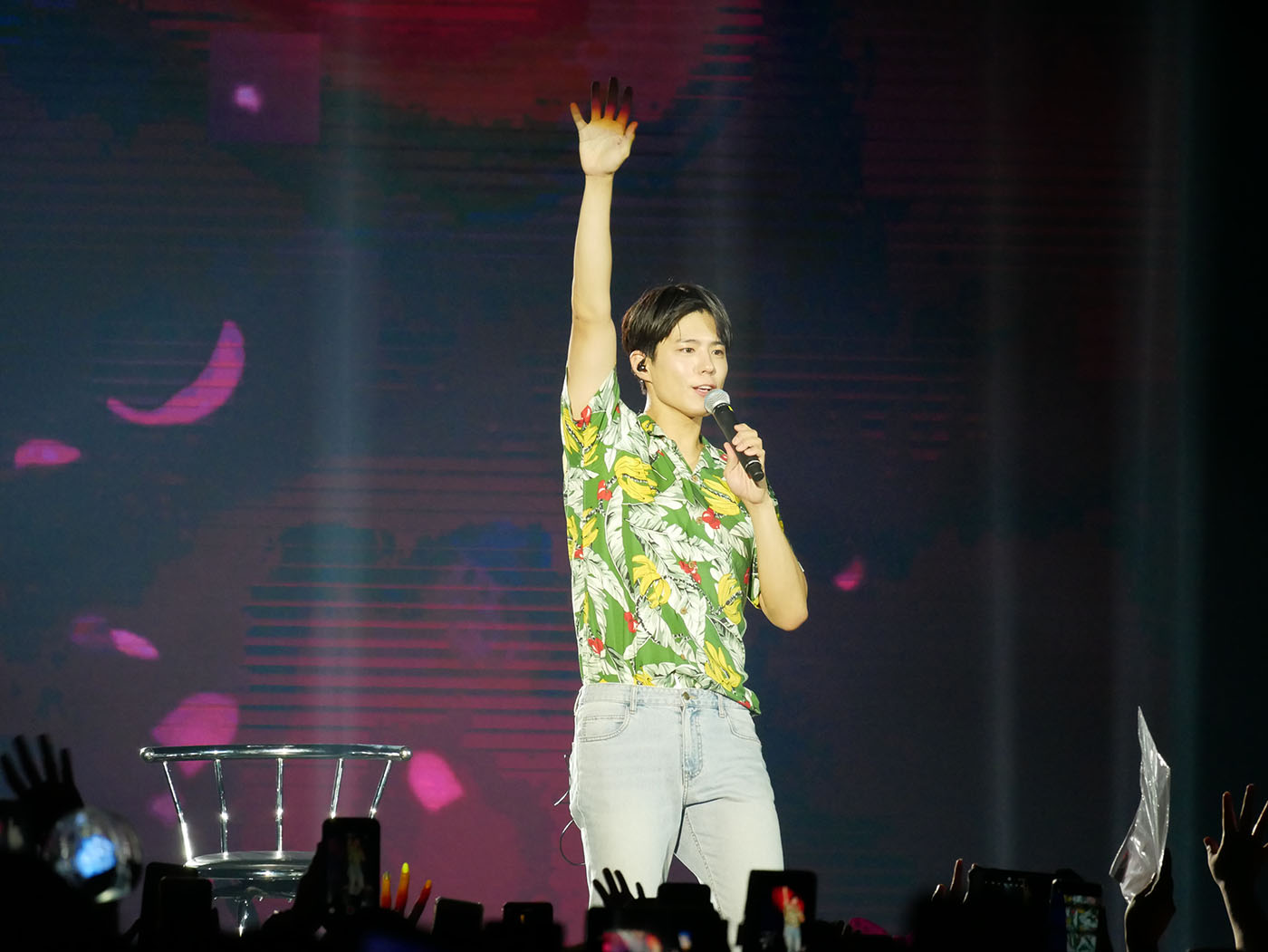 Manila didn’t see an iota of exhaustion from Bo-gum. Instead, onstage was a versatile artist who carried a lively conversation with his fans. We’re grateful Bo-gum spoke English most of the time, and was truly charming when he switched to Korean to express himself more genuinely to his fans. An interpreter quickly provided the translation.

Bo-gum lived up to his show’s title—the euphoria of the event has yet to die down for all of us who watched him.

Bo-gum is first to admit that he isn’t much of a dancer, but he had a dance segment featuring “What is Love” by the girl group Twice, “Pretty U” by boy band Seventeen, and “Boy with Luv” by BTS. His dancing prowess isn’t idol material, but he’s got rhythm. You can easily spot that dancing doesn’t come naturally to Bo-gum, but that he gave his all made him adorable.

He quickly obliged too, when fans chanted “Bombastic,” his dance for the promo of his 2016 drama, Love in the Moonlight.

But Bo-gum was flawless when he sat behind a grand piano to sing Steven Curtis Chapman’s “I Will Be Here.” He is, after all, a musical theater major. Which is why I wish that the production staff chose a better Tagalog song for Bo-gum to sing, and not a ditty, to match his carefully selected playlist.

But certified Bogummies like my friend Tin, are forgiving. They loved the fact that their man tried to learn a Tagalog song—whatever it was. 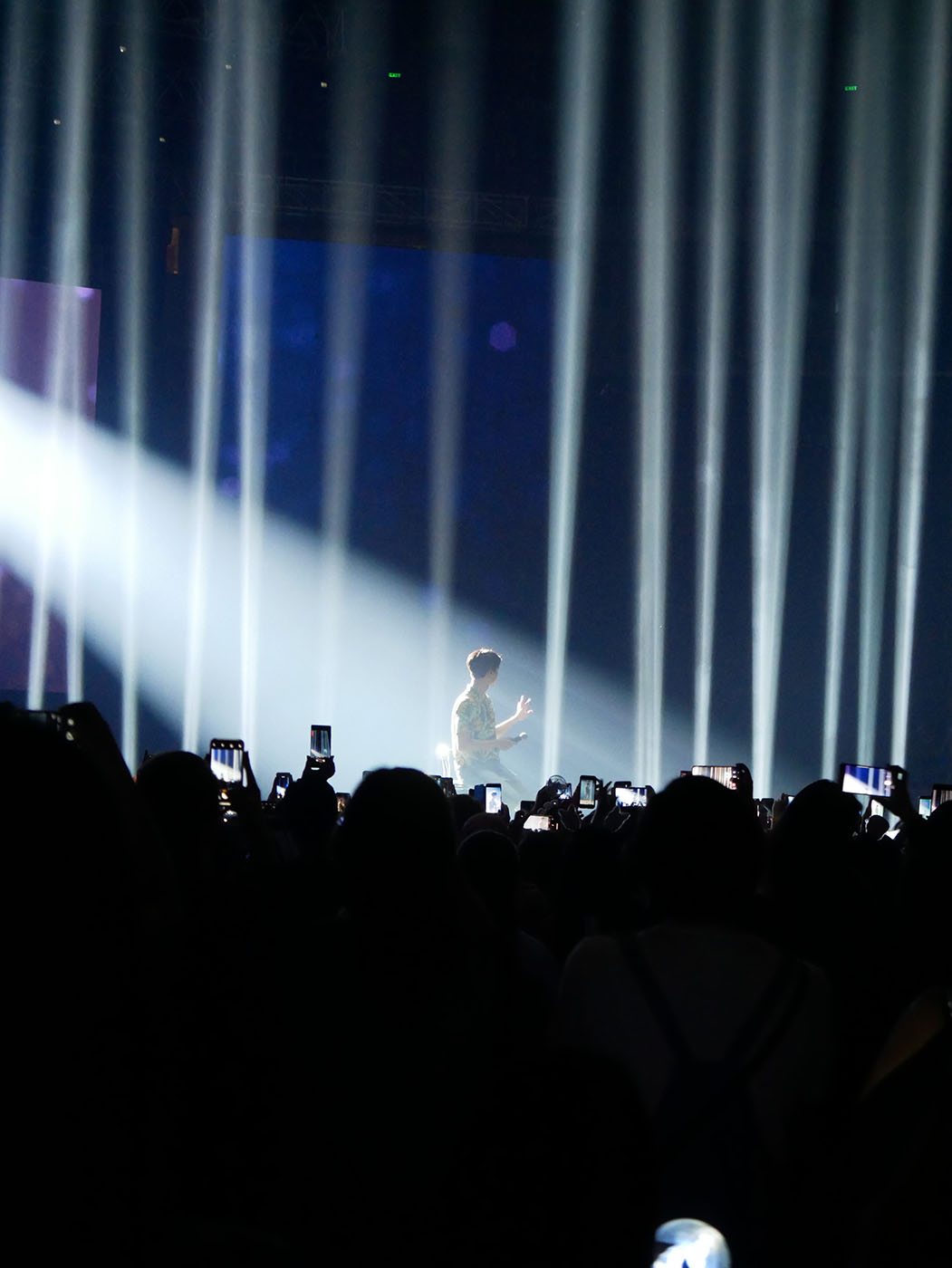 “Good Day” followed the usual Korean fan meet template: the first half was the fan interaction
and the second half was the concert. I lost count how many songs Bo-gum performed, and I must confess I didn’t know all of them. It was great fan service that the English translations of his songs were flashed on screen. At least we understood the lyrics and got to appreciate his performance all the more.

The Park Bo-gum light sticks, which the actor designed himself, the blinking headbands, and the little electric candles gave the fan meet an almost cinematic feel whenever the actor sang.

Bo-gum told host Anne Curtis-Smith during the Q and A portion that he had been to the Philippines, even before the fan meet. He spent his vacation here after wrapping up Love in the Moonlight. Of course, that made his Filipino fans feel special.

He also doesn’t drink alcohol, which was why he said, he had a difficult time doing his drunk scene in his latest drama, Encounter. He wasn’t sure if he was convincing enough. His supportive fans assured him he did a great job.

Anne hosted the first half of the show, and she obviously tried her best to separate her own fan experience from the job she had to do. But her giggles, especially as Bo-gum bantered with her, betrayed her—and it was fully acceptable and understandable as a normal reaction from a normal fan. Anne was—is—one of us. 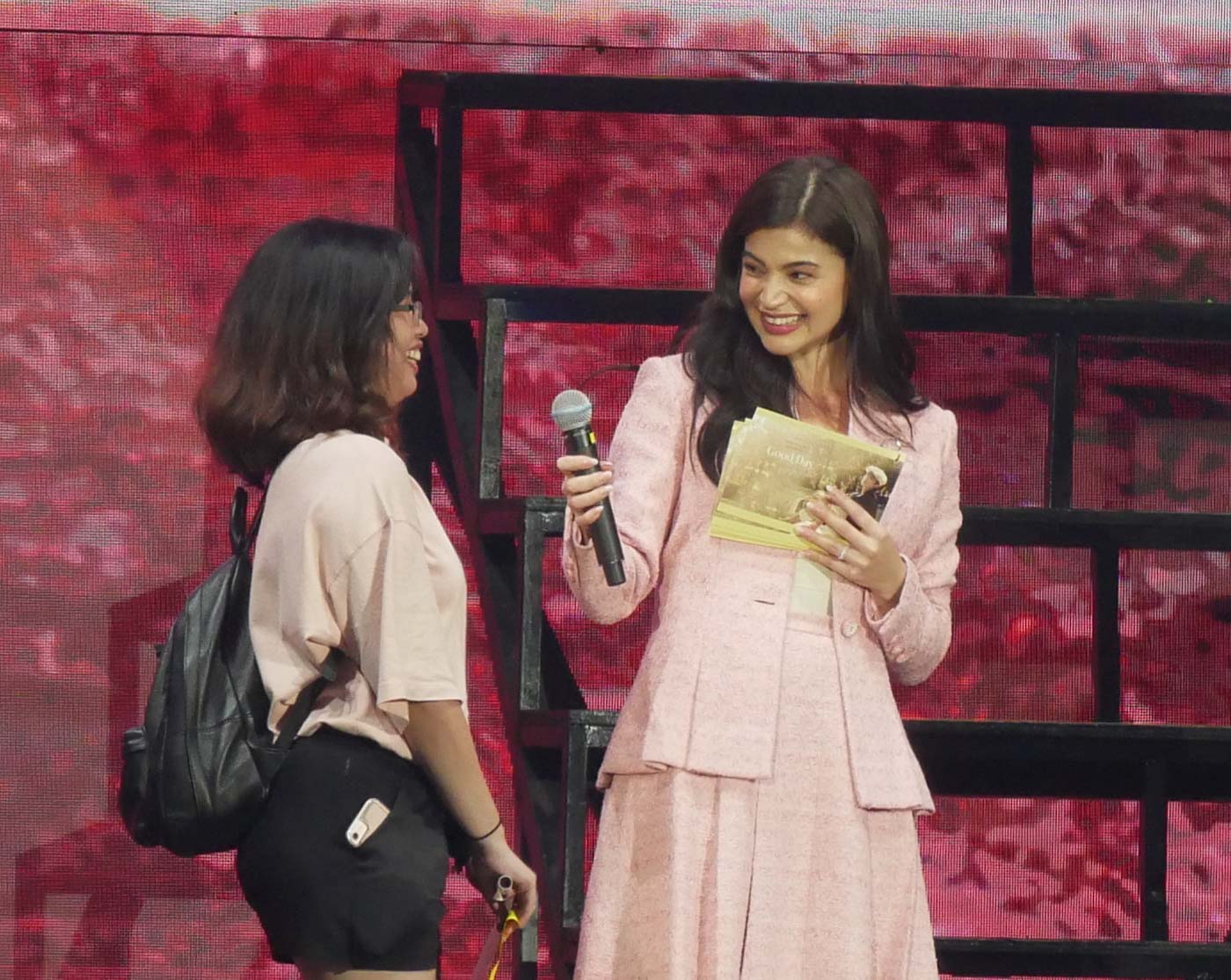 Bo-gum’s charm cuts across generations. His fans were young and old. We were seated beside a Korean ahjumma (similar to our “Tita”) who had her own Bo-gum light stick. Another ahjumma had the chance to join the reenactment of some scenes in Encounter. It was heartwarming to see Bo-gum bow to her as a sign of respect, and he gave her a big hug, too!

His fans’ excitement was palpable almost throughout the show but things went up a notch when Bo-gum opened the second half of the show by coming out from one side of the lower box section while he sang. He wove his way throughout that entire second floor of the Arena then went down and walked in the middle aisle of the patron seats.

Excited screams shook the venue and everybody had their camera phones up to take photos and videos. “Hindi ba sya dambahin?! (Won’t someone jump on him?!)” my friend, Camille, another Ji Chang-wook fan, shouted. “Kaya malaki bodyguards nya! (That’s why he has big bodyguards!)” I shouted back.

Bo-gum made it safely to the stage, clearly enjoying the surprise he had for his unsuspecting fans.

“Exhilarating” was how Tin described the entire experience. Her favorite moments, she said, “were the ones off-script where he let his true personality shine because beyond his acting talent, fans love PBG for his humor and genuineness.”

You’d actually think Good Day would just go on and on and on until the next day. That would’ve been fun. Bo-gum’s encore performance was the longest in any show I had seen. It was also difficult to say goodbye and goodnight when you see him take a peek from under the curtain as it rolled down.

And just as you thought the fan meet was really over, they announce that Bo-gum has another surprise for everyone. It was a hi-touch, which is actually a high-five. There were around 5,000 of us. Section by section, row by row, we were led to the backstage.

While we waited for our turn, Tin looked at her faded and ratty long-sleeved blouse. “Malay ko ba na mag-face-to-face kame?! (Who would’ve thought I’d see him face-to-face?!)” she fake-cried. She would’ve worn a nicer top. She didn’t even wear lipstick, so I lent her mine. 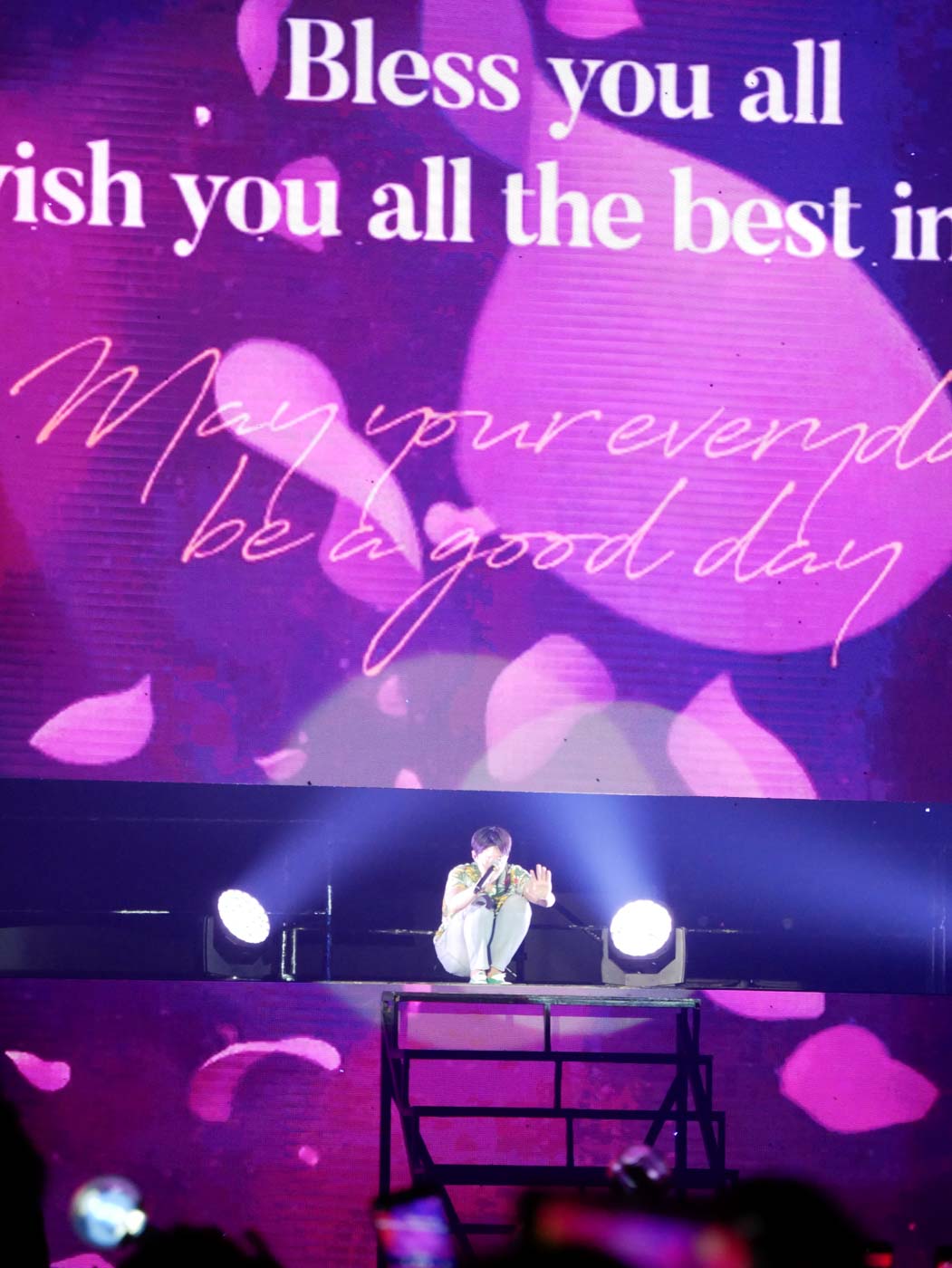 Finally, we saw him. Standing behind a table and between two burly bodyguards, there was Park Bo-gum, leaning towards his fans, his hand raised for the high-five, smiling brightly.

And so my friend was finally face-to-face with him, holding out her hand instead of up, making him put his palm on hers. It was her own special moment with her Park Bo-gum. – Rappler.com