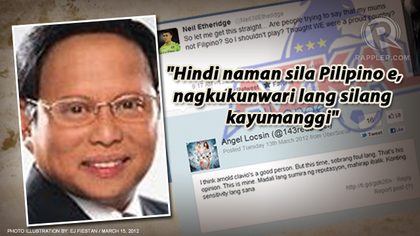 MANILA, Philippines – TV news anchor Arnold Clavio became the top trending topic on Twitter in the Philippines from March 13 to 14, after a comment he made about the Azkals went viral on social media.

Several tweeps chimed in on the issue, most of them expressing displeasure with the veteran anchor.

Even actress Angel Locsin, who is dating Azkals striker Phil Younghusband, could not help but tweet about the issue. “I think Arnold Clavio is a good person. But this time, sobrang foul lang. That’s his opinion. This is mine. Madali lang sumira ng reputasyon, mahirap ibalik. Konting sensitivy lang sana.”

The news inevitably reached some of the Azkals. Goalie Neil Etheridge tweeted this in reaction: “So let me get this straight…Are people trying to say that my mums not Filipino? So I shouldn’t play? Thought WE were a proud country.”

As of early Wednesday morning, March 14 , Clavio was still on top of Twitter’s trends list.

Clavio told Rappler in a text message: “What I was talking about was the sexual harassment complaint of Cristy Ramos [against players of the Azkals]. Hiwalay sa isyu ng kanilang laban (This issue is different from their game). I even congratulated them on their latest victory.”

Clavio also clarified that he is not on Twitter and that accounts under his name reacting to “haters” were not his.

The video clip can be seen here, tell us what you think in the comments or tweet us at @rapplerdotcom. – Rappler.com