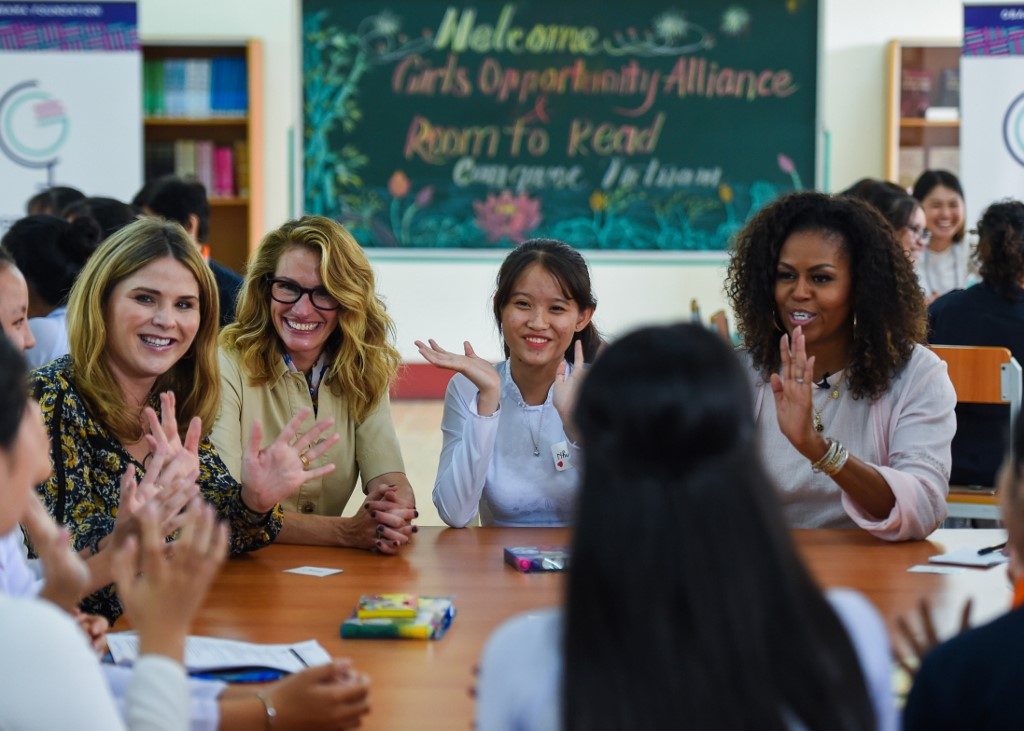 CAN GIUOC, Vietnam – Former US first lady Michelle Obama and Hollywood A-lister Julia Roberts toured a high school in rural Vietnam on Monday, December 9, urging a classroom of teenage girls to stay focused on their education to transform their lives.

The promotion of girls’ schooling has been the cornerstone of Obama’s charitable work since her husband Barack Obama left office in 2017 after two terms as US president.

Accompanied by Roberts and Jenna Bush Hager, daughter of former US president George W. Bush, Obama encouraged the girls to stay the course of schooling.

“I want you all to stay committed and focused, it will get tough at times – it already has for some of you – but it is well worth it,” she said, before the women sat and chatted with students.

“Even if your families don’t understand that today, trust me they will, when you go off to college or start your businesses,” she added.

With its booming youth population and fast-growing economy, Vietnam routinely outperforms its neighbors in education rankings, especially in math and sciences.

School enrolment rates are also high at 91.7%, but the quality of schooling often drops off in rural areas, and in the poorest pockets of the country economic pressures can force girls out of school early.

“She kept trying every day to be better and now we can see that she is very successful,” the 16-year-old told Agence France-Presse.

In her best-selling book Becoming, Harvard-educated Obama details how her own education and good teachers shaped her life and paved her path to becoming a successful lawyer, university administrator and advocate.

The Obamas have dedicated much of their time post-presidency to the non-profit Obama Foundation, which includes the Girls Opportunity Alliance initiative that Michelle promoted in Vietnam on Monday.

The former first lady announced last week a $500,000 donation to the Alliance’s work world-wide, money earned from merchandise sales related to her book.

She will travel next to Malaysia with Barack and Roberts to speak at an Obama Foundation Leaders event on Tuesday, December 10. – Rappler.com