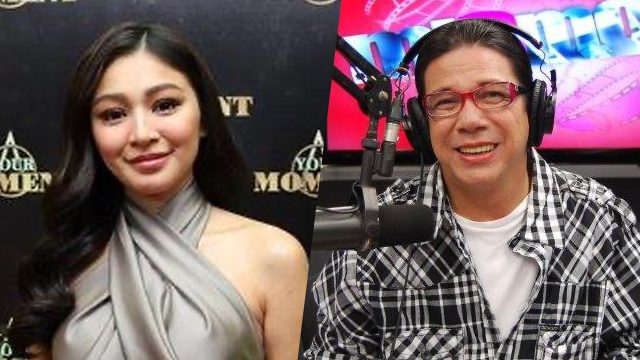 (You are wrong here. First of all, we want to remind you JaDine fans that this is not our idea. We don’t know what’s happening in your idols’ lives. They are the ones making stories and our mistake is that we wrote about it and it became big and people talked about it.)

#SuicideIsNotAJokeJobert trended on Twitter, as fans and mental health advocates called out the entertainment writer for his irresponsible statements.

Nadine had earlier clapped back at Ricky Lo after he insisted, in a column for the Star, that a Pep report claiming that Nadine and onscreen and real-life partner James Reid had broken up. Lo had also dragged Nadine’s mental health problems into the discussion, for some reason. Nadine denied all of the claims in Lo’s column and criticized him for “using someone’s mental situation/tragic past just to prove a point.”

The Pep report claimed the two spent Christmas and New Year’s apart – but sleuthing fans easily dug up photos to prove that the two had actually spent the holidays with each other and their respective families.

Still, Sucaldito insisted that Lo did not deserve Nadine’s sarcasm because he has “lived almost all his life in this business, and he has gained that reputation, that respect, dignity as a journalist.” Sucaldito said Nadine should apologize to Ricky for the remark. He then posted a long message for Nadine on his Facebook account, where he said that while he adored Nadine, she had a lot to learn.

While Sucaldito was busy trying to scold Nadine, several personalities in the entertainment industry criticized him for his flippant remarks about suicide.

Liway director Kip Oebanda reminded both Jobert and the public that laws exist to protect people from discrimination based on their mental health issues.

Unacceptable. I am shocked that someone in 2020 is able to say these things to someone known to have mental illness. I will not repeat those words nor share the audio. Too vile. Too disgusting. #SuicideIsNotAJokeJobert

May RA 11036 na po. Discrimination is punished under the Mental Health law, especially if it is done on such a public platform. Nadine doesn't deserve this. No one does. Pwede ba, umayos tayo?! #SuicideIsNotAJokeJobert

Thanks for bringing this to our attention.

That is extremely insensitive, Jobert Sucaldito, (@JOBERTdzmmMIZMO)! Please never treat suicide as a joke or worse provoke someone to kill themselves.
DO NOT CROSS THAT LINE. Let's educate ourselves about this issue, pls. We can talk. https://t.co/vYHdboOzru

Making light of suicide and mental illness is not funny and should not be tolerated.

“WAKE UP AND GROW UP. Suicide is not a joking matter or something to bring up passively for clout. I am stunned. How can someone be so ignorant and insensitive about this issue in this day and age?”

WAKE UP AND GROW UP. Suicide is not a joking matter or something to bring up passively for clout. I am stunned. How can someone be so ignorant and insensitive about this issue in this day and age?

Thinking of all the people I have met who silently struggle with mental health & suicidal thoughts and then hearing someone so callously turn that battle into a joke just goes to show that there is still so much work to be done. We must educate ourselves to break the stigma.

Mental health advocate Gia Sison reminded the public to use their platforms wisely when it comes to the issue of mental health.

Just a reminder that the Philippines already has RA 11036 known as the Mental Health Law which everyone should read or know about. Reminder too that suicide is NEVER a joke and that mental health should be taken seriously. Use your platforms wisely. #SuicideIsNotAJoke

Just a reminder that the Philippines already has RA 11036 known as the Mental Health Law which everyone should read or know about. Reminder too that suicide is NEVER a joke and that mental health should be taken seriously. Use your platforms wisely. #SuicideIsNotAJoke

Fans told Jobert to leave Nadine alone and pointed out that they didn’t start the issue.

Seeing other fandoms tweets aww thank you this is not for nadine anymore, this for all the people who have mental illness, this our battle

Not just for Jobert but for all of us. Suicide is not an option, and it will never be an option. Everyone has their own battles to fight with, be kind to everyone. Be careful with your words.#SuicideIsNotAJokeJobert #ApologizeToNadine

ABS-CBN News and Current Affairs head Ging Reyes issued a statement, saying they will look into the matter.