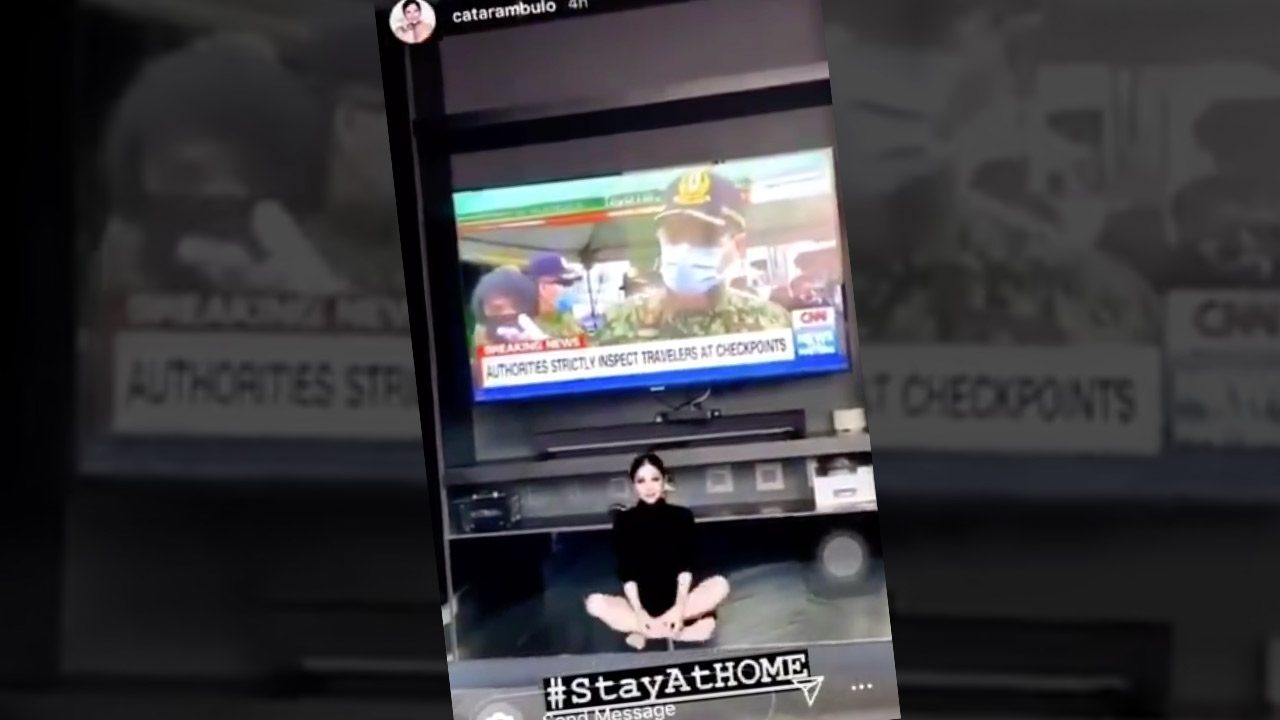 MANILA, Philippines (UPDATED) – Filipinos online are blasting Instagram influencer and mommy blogger Cat Arambulo Antonio for her “insensitive, anti-poor” remarks on workers stranded at checkpoints as the national government implemented “enhanced community quarantines” to stop the spread of the coronavirus.

While the report played on Cat’s flat screen TV, she said in her original Instagram Story, “God, why don’t you motherf*ckers just stay at home?”

“Stay at home! Don’t you guys get it? Tigas ng ulo (So hardheaded). This is exactly why they need the military because you f*ckers won’t stay at home. Guys, come on.”

"God why don't you motherf*ckers just stay at home"

she said to WORKERS BEING ARRESTED while watching her 52 inch TV SAFE AND SECURE at home.

Filipinos online were quick to react, calling out the socialite for her “ignorant” remarks on daily minimum wage workers who scrambled to get to work, and back home, just to make a living despite the lockdown.

Before the Luzon-wide lockdown took effect on Tuesday, March 17, only Metro Manila was under lockdown from Sunday, March 15, to Monday, March 16

The first quarantine meant movement to and from Metro Manila was tightly regulated, with checkpoints set up across the borders dividing the megacity from neighboring towns and municipalities. While public transport was still allowed, “social distancing” (an important practice to avoid the spread of the virus) and long waits at the checkpoints meant modes of transport were scarce.

In the Philippines, many minimum wage workers only receive pay if they show up to work. They usually don’t have the option to work remotely from home, a scheme many companies have allowed because of the coronavirus threat.

Meanwhile, all modes of public transportation are suspended under the island-wide “enhanced community quarantine.”

“This is devoid of compassion for the poor. I am at wit’s end why they could not understand that social distancing is for the rich and privileged,” Twitter user @kbomolina said.

“Just shut up and be thankful that your family has something to f*cking eat even if you don’t work for a month. A lot of people already struggle to eat on a daily basis even before the pandemic,” another Twitter user wrote.

Cat Arambulo whoever the fuck you are, just shut up and be thankful that your family has something to fucking eat even if you don't work for a month. Alot of people already struggle to eat on a daily basis even before the pandemic. Just fucking polish your ivory tower or sumthing

“Cat Arambulo” eventually trended on Twitter on Tuesday. After the online backlash, she posted an apology on Instagram, explaining the reason behind her outburst. But as of this posting, Cat took down the series of videos.

She explained that her remarks were not for the frontliners, but for Filipinos who weren’t listening to the government, “‘yung mga pasaway (the hardheaded).”

She went on to say that “everyone is affected right now,” that self-quarantine was crucial, and that the Philippine health care system would not be able to handle an influx of sick people.

“Our hospitals can collapse. For me the real purpose of that message was directed to people who aren’t listening…. I sincerely apologize if people were affected,” she said.

“I get your point naman po on why people need to stay at home, but not everyone po kasi is privileged to lounge and stay at the house. People are out there po to earn and put food on the table to their families,” an Instagram user commented on her video.

“Do you realize how much of what you said is actually an enunciation of the wide socioeconomic gap in our country? How much more of your views do not speak of the anxiety of people without secure income, health care, food, shelter?” another user replied.

“It’s just so frustrating to see that some people who have the option to stay home are still not following the government’s efforts. I’m sorry for how it sounded like but do know I only have the best intentions – our collective safety and that this will end soon,” she wrote.

She posted another apology on March 18, this time over her insensitivity. “I didn’t mean to undermine anyone — hurt and offend everyone. I should have been more considerate of others who are trying to cope with this crisis,” she said.

She also apologized to brands “who got affected” by the backlash. Cat works with several brands, either as an endorser or partner.

“This was a hard lesson for me and I will use this to educate myself and strive to be better. Hoping for your forgiveness and I will try to do whatever I can to help. I’m so very sorry,” she said.

The Luzon quarantine will last until April 12. Local airlines have canceled all their flights until then and mass transportation has been shut down. Most establishments have also been shut down, save for “essentials,” including hospitals, drug stores, clinics, markets, and groceries.

Health workers and employees of those “essential” stores, however, have struggled to get to work because of the shutdown of public transportation in Luzon.

As of Monday, the Philippines has a total of 187 confirmed cases of the novel coronavirus, with 4 recoveries and 14 deaths.

The global death toll, meanwhile, has reached 7,063, with 3,226 of the fatalities in China (excluding Hong Kong and Macau). The number of cases worldwide has risen to 180,090, with more than 80,881 of the infections in China. The virus has spread to at least 145 countries. – with a report from Agence-France Presse Rappler.com