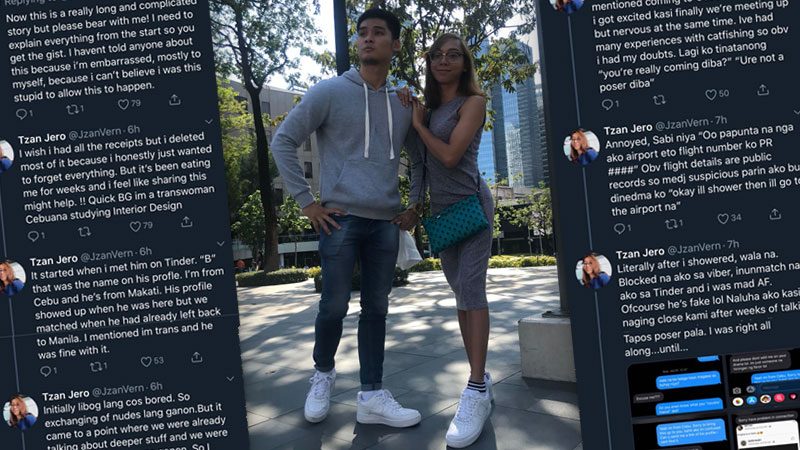 MANILA, Philippines – A boycott has been called against Sam Morales – a filmmaker who has worked with big brands like H&M, Teviant, and Jag – after a transgender woman from Cebu accused her of setting up an elaborate catfishing scheme that went on for 8 months.

Internet star Mimiyuuuh was among those who called on the fashion industry to stop working with Sam, saying

What (in the world) happened?

On Monday, March 30, an interior design student who lists her name as Jzan Vern on Twitter, posted a thread detailing her experience of being catfished. In the thread, she shared that her story began when she started chatting with a man she matched with on Tinder.

The man, who later shared his full name as “Bill Iver Reyes,” was from Manila, so they couldn’t meet up in person, but Jzan said that they ended up chatting everyday for weeks, which made her feel close to him. According to Jzan, Bill said he was a 24-year-old art director who also did some modeling. She said she tried looking for him on social media, but nothing turned up.

I got catfished: a (really long) thread pic.twitter.com/5BQ2G5kcif

Jzan said that Bill eventually mentioned he was going to Cebu for work, and that they had planned to meet up. Bill even left her a flight number, but just as Jzan was about to leave for the airport to pick him up, he blocked her on Viber and unmatched her on Tinder – at which point she believed her suspicions that he had been a poser all along.

She then received her first text from Sam. Screenshots shared on the thread showed that Sam texted Jzan introducing herself as Bill’s cousin, and apologizing on his behalf because he had to rush back to Manila after their aunt died. The screenshots showed that their exchange happened in July.

“So at that point I was convinced he’s 100% poser…UNTIL! He video called me,” Jzan said, sharing a screenrecording of Bill’s call without audio, where he apparently assured her that he wasn’t a poser.

After the video call, Jzan said that she and Bill continued to chat, messaging every day but only calling or facetiming on rare occasions. After a big fight where Bill accused Jzan of cheating, she ended up getting in touch with Sam once again, to make sure he was alright. Jzan said that she eventually got on the phone with Sam, and could hear Bill “nagwawala” (going crazy) in the background. After that, they lost contact for about a week.

Jzan then said she emailed Bill, and after he responded, they continued to chat for another two months and eventually made plans for Bill to move to Cebu so he could be near her. Before the move, Jzan said she flew to Manila to see Bill first and meet him in person for the first time.

After hugging for the first time and being overwhelmed, the two had a meal at Jollibee, at which point, Jzan said she noticed that Bill fell silent. When she pressed him, he apparently said he didn’t want to push through with her anymore.

He then walked out and left her on her own.

At this point, her friends did some asking around and discovered that “Bill Iver Reyes” turned out to be a man name Bilko Wagan Argana, who apparently had a girlfriend. Before leaving for Cebu, she told him she knew his real name, and texted Sam that she knew the truth as well.

“The trust wasn’t there na. But in my head this is better than me hooking up around or getting addicted with tinder/bumble. He would help me with my plates…so in my head. Okay na ‘to (this is okay). I benefit from this anyway.”

After several plans to meet up fell through, and an accusation that Jzan was cheating on him, they eventually planned to meet when Jzan said she was flying to Manila for the Wanderland Music Festival in March.

Jzan said Bilko got cold feet a few days before they were about to meet up, but she texted Sam in the hopes that she may be able to convince Bilko to go. Eventually, Bilko agreed, on the condition that Sam would be there as well. In the thread, Jzan shared videos of their meet up, with Bilko bringing flowers and Sam apparently behind the camera.

Sam apparently insisted on taking photos of the two of them, and accompanied them for lunch and even joined them back at their hotel room. After Sam left, Jzan said she asked Bilko for a kiss, but he didn’t want to. When she asked him why, he apparently said “ayaw lang (I just don’t want to ).”

Later on, she said she was ready to end it, until Bilko apparently “started fucking” her.

“He came and then said to me ‘masaya ka na (are you happy now)?’ I WAS LIKE TANG INA (MOTHERFUCKER)?!?! You fucked me. I just wanted a kiss. Anong MASAYA NA BA AKO (WHAT DO YOU MEAN AM I HAPPY NOW)?!?!?” Jzan said in the thread.

According to Bilko, Jzan had been talking to Sam all along, and that he didn’t even have Viber – which is where their chats would normally happen. Bilko claimed that Sam had manipulated him into playing along because he didn’t want to lose work. He said he was Sam’s shoot assistant, and she would give him modeling gigs.

“8 months. Ginago nila ako (they played with me) for 8 long months. I never expected someone this talented to be this fucked up. She’s worked with big names and brands in the industry. WHO WOULD’VE FUCKING THOUGHT?!?” Jzan said, sharing a screenshot of Sam’s Instagram profile, which has since been deleted.

Jzan later said that Sam called her to explain what happened. Apparently Sam had been bullied by gay people when she was younger, and that her homophobic uncle found out about the bullying and manipulated one of them to fall in love with him.

“He did it for a while until nagsawa siya (he lost interest) and asked Sam to continue it. In her words ‘it became an addiction.’ They would target gay/trans people, make them fall in love and then ghost them. That’s how it started with me. When they found out I was trans,” Jzan said.

She added that along with Sam, there was another woman and a man involved in the scheme. They had apparently planned to chat with Jzan for just a week, but Jzan became suspicious and mentioned that she would ruin their reputation if she found out that she was being played.

“At that time I was just joking of course. I didn’t really expect it to be this intense…So Sam pushed with the whole scheme…for 8 months,” she said.

“Sam manipulated Bilko. Sam would tell Bilko may shoot daw sila ganito ganyan (that they had a shoot somewhere). And mashoshock nalang si Bilko kasi may imimeet daw ganon (And Bilko would be shocked that he would be meeting up with someone),” she said, connecting the revelation to her initial airport meet up with Bilko and their BGC meet.

Sam and her friends had even apparently hired people to do Jzan’s layouts because they wanted to feel that they were at least helping Jzan in some way.

Jzan said that Sam started crying and apologizing over the phone, admitting that she was “fucked up” and that she was afraid her reputation would be ruined after she landed deals with big brands.

“But to what extent?” Jzan said. “My feelings? Yung pagkatao ko (my humanity)? Yung oras, pera lahat lahat na ininvest ko for this (The time, money, and everything I invested in this)!!?!”

“THIS IS FUCKED UP. I cried. I didn’t know how to feel. So i tried to forget EVERYTHING and tried to move on. But wala (nothing). It’s been eating me for the past few weeks,” she said.

“I had no one to share cos even ako (I) don’t understand how fucked up this situation is. So I stayed silent. But I realized I’m not [going to] let you motherfuckers get away with this,” Jzan said at the end of her thread. “You guys are fucked up in the head. I just wanted to love and be loved. I DONT DESERVE THIS. NO ONE DOES.”

As of this writing, Sam has yet to respond to Jzan’s accusations. – Rappler.com