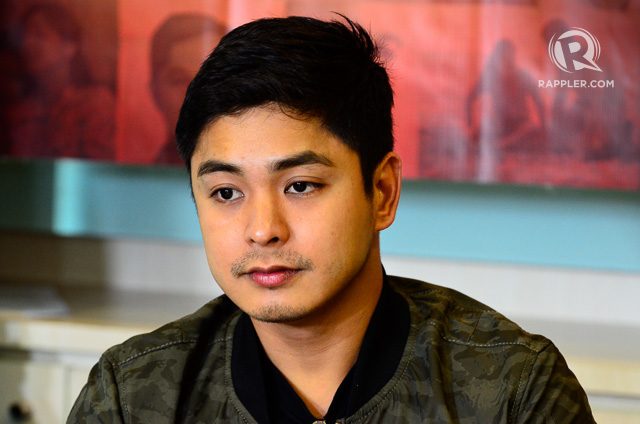 MANILA, Philippines – Coco Martin, one of ABS-CBN’s biggest talents, has not held back since the National Telecommunications Commission (NTC) ordered media giant ABS-CBN to stop operations on Tuesday, May 5.

The actor was among the first among the network’s talents to call out the government’s move after ABS-CBN went off-air – and he continued to do so in a Facebook live event on Friday, May 8. (READ:‘Ang Probinsyano’ star Coco Martin slams Calida, NTC: ‘Tinatarantado ninyo ang mga Pilipino’)

In the video, Coco, the star of long-running teleserye Ang Probinsyano, questioned the timing of the shutdown order, as well as the priorities of the government.

(I said, what kind of people are they? In the middle of a pandemic, in the middle of everything that’s happening to our country, they thought of shutting down ABS-CBN instead of answering to all the other needs of our country?)

He stressed that ABS-CBN and its artists pay their taxes every year, and beyond that, they work to serve Filipinos around the world in their own way as actors by giving them entertainment and inspiration.

(At this time, ABS-CBN and its talents are among those helping the people. What’s the problem with that?)

(At this time, what are we going to prioritize? Remove the company helping others, helping Filipinos? Or the gambling that has entered our country? The POGOs are lucky, you are fighting for them.)

Coco was referring to the government’s move on May 1 to permit Philippine Offshore Gaming Operations (POGOs), mostly run by Chinese businessmen, to resume operations provided they pay their taxes.

Coco went on to question why some people are so happy that ABS-CBN has been shutdown and why they are rejoicing that the network’s 11,000 employees are now at risk of losing their jobs.

He also questioned Presidential Spokesperson Harry Roque saying that ABS-CBN employees may qualify for the emergency subsidy program of the Department of Labor and Employment (DOLE).

(You can’t even provide for the entire country. We’ll add to that problem?)

Coco wondered if ABS-CBN did commit a violation, why was the network not asked to pay a penalty first. He said that as an actor, he doesn’t know much about the law, but he knows that the law should be for the people.

He said that the company was not trying to evade the law, pointing out that ABS-CBN President and CEO Carlo Katigbak even gave a statement at a Senate hearing on the company’s franchise renewal in February.

(What we’re trying to tell you is that we hope you understand. Our country is going through a crisis right now and I wish they thought of the people, that they let this blow over, and then we all head to Congress and see what the results will be. That’s all).

Along with Coco, other ABS-CBN talents appeared in the video, including actress Bela Padilla, TV Patrol weather anchor Kim Atienza, directors Antoinette Jadaone and Dan Villegas, and a surprisingly outspoken Kim Chiu, who said that shutting down ABS-CBN was tantamount to taking away the dreams of Filipinos.

Kim rose to fame after winning the first Pinoy Big Brother: Teen Edition in 2006. She said that ABS-CBN gave her the opportunity to provide for her family, adding that shutting the network down takes that opportunity away from others.

(ABS-CBN has platforms to help ordinary people, both young and old. Why would they take away a person’s dreams and hopes?)

(You’ve taken away the joy of each Filipino at this time. Why would you take away the platform of ordinary people?)

(ABS-CBN did not violate any laws, our franchise renewal was simply delayed. We call on the NTC to let us come back and defend our rights.)

At the same time, Coco asked his fellow entertainment industry workers to support ABS-CBN, saying it was their fight, too. He also appealed to Filipinos.

(We hope you help us. We appeal to you. Because if we don’t take action and let this happen, it’s like we’ve allowed them to kick us down and laugh at us. There is no other time than now to take action. And we are just starting.) – Rappler.com