May 13, 2020 5:06 PM PHT
Rappler.com
Facebook Twitter Copy URL
Copied
The actress was criticized for an admittedly incoherent line comparing the ABS-CBN shutdown to classroom rules; she's since apologized and poked fun at herself over the quote 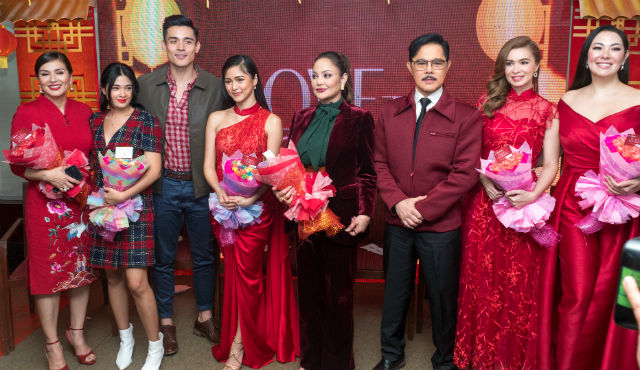 MANILA, Philippines – The cast members of the show Love Thy Woman came to the defense of Kim Chiu after the actress was criticized online over something she said during an online gathering of ABS-CBN stars.

During a live chat dubbed Laban Kapamilya, Kim hosted on her Facebook page several ABS-CBN artists who took turns talking about the effect of the network’s shutdown. ABS-CBN went off air on May 5 after the National Telecommunications Commission issued a cease and desist order against it. The media giant’s franchise had expired because Congress failed to act on it, despite several pending bills that would have granted it a new franchise.

Speaking during the live event, Kim compared – rather incoherently — the NTC’s closure of the network to classroom rules. Host Bianca Gonzales had asked the group about criticism that they were merely making themselves look like victims. She also asked them about insinuations that ABS-CBN did not follow the proper process for franchise renewal.

(In a classroom, there are rules like… OK, you can’t go out. So you comply because you can’t go out but then do something you’re not allowed to. You fix the classroom’s laws and submit it again and… well, now you can go out.)

The actress herself has acknowledged how confusing her own statement was and has apologized for the confusion. Kim also made fun of herself over her statement.

Christopher de Leon, who plays Kim’s father Adam Wong in the show described the actress as a “ray of sunshine.”

“Napakagaan kasama. She’s somebody who’s always eager to learn.  She never CLAIMED to be outstanding on anything. Ang laging niyang pinaghuhugutan ay ang personal experiences niya… lagi siyang nagsi-share ng part of herself each one of us. Very warm , very personal and for that I Love KIM,” the actor shared on Instagram.

(She is fun to be with. She’s somebody who’s always eager to learn. She never claimed to be outstanding on anything. She always obtains everything from her personal experiences… she’s always sharing a part of herself to each one of us. Very warm, very persona, and for that I love Kim.)

Zsa Zsa Padilla also attests to Kim’s warm personality and professionalism, having worked with her in past projects.

(Kim is very down to earth that’s why I love her. I witnessed how she would give time for her fans. Kim I know you are prayerful person and whatever you are going through, have faith in Him. And please know that I love you and I am here for you.)

Sunshine Cruz, who plays her mom Kai on the show, wrote: “Noon pa man, I’ve been hearing good things about her and totoo ngang napakabait, laging nakangiti, professional at mahusay hindi lang bilang artista kundi bilang tao. Madaling makagaangan ng kalooban ang isang Kimmy because she is genuine and humble. Sabi ko nga no wonder blessed sya dahil mabuting tao pala talaga. Kimmy, andito ako your mama kai/mama shine. Know that maraming nagmamahal sayo and I am one of them. This too shall pass. Kapit lang anak! I can’t wait to hug you and see you and our LTW family.”

(I’ve long heard good things about her and it’s true. She’s kind, always has a smile on her face, is professional, and is good not just as an actress but as a person. It’s easy to like Kimmy because she is genuine and humble. I told myself, no wonder she’s blessed, she’s such a good person. Kimmy, your Mama Kai/Mama Shine is just here. Know that a lot of people love you and that I’m one of them. This too shall pass. Don’t lose faith, anak. I can’t wait to hug and see you and our LTW family.)

Ruffa Gutierrez also expressed her support for Kim saying: “Sending virtual hugs to Kim who I really got to know while working on ‘Love Thy Woman’. She’s professional, humble, magalang and generous – she always has pasalubong for everyone. I believe that one mistake doesn’t define who you are. Keep your chin up Kimmie! I’m here for you!
This too shall pass.”

Xian Lim also came to the defense of his girlfriend, pointing out that she does not deserve the bashing and hate.

“Kim does not deserve to be singled out and get all the hate she is getting from people in the internet. She is a smart, empathetic person who deeply cares for all the people around her. She cares so much that it scares me.”

“We are not perfect. No one is. We have our share of mishaps that shake us down to the ground but we learn and we rise back up again. My love and support goes out to Kim for being a wonderful human being.”

The actor also appealed to those who continue to criticized celebrities who have been voicing their thoughts on the shutdown during the coronavirus pandemic.

“A few days ago, a couple of artists went live on social media and received numberous amount of hate. Let me say this, It takes a whole lot of guts to face millions of people and fight for what you truly believe in. Most people won’t even have that opportunity in their lifetime.

(Lastly, let’s stop putting other people down because it’s not helping the situation. Let’s just help one another in whatever way we can and stop blaming other people. No system is perfect. The world is not perfect.)
.
“We have little time in our hands. It’s really a matter of asking yourself how well you want to be remembered when your time is up,” he said.