Lea Salonga trends on Twitter as fans rally behind her MANILA, Philippines – Lea Salonga did not hide her frustration with what’s happening in the Philippines, as she took to Facebook on Monday, June 15 to express her thoughts.

The singer didn’t say what exactly she was frustrated about but in a conversation with Constitutional Reformist advocate  and Correct Movement founder Orion Perez, who said that the government had a “bulok (rotten) system,” the Voice of the Philippines coach and international theater actress, replied: “I want to think fixing the system is possible still, albeit difficult. But we may now be beyond that point.”

She also said that she doesn’t believe in everything that she reads and sees, even if the sources are credible.

“Here’s my problem… I don’t possess a lot of trust in the things I see and read, even if and when the sources are supposed to be those in which we should be able to have unquestionable trust. Second, I house a conspiracy theorist in my head, one that I do try to quell in order to stay focused on the long game. Third, there is always a sense of fear that if anyone pisses off the wrong guy, one can get shot in broad daylight,” she said.

She also said that criticism in the government shouldn’t be considered “hatred.”

“Criticism of one’s government shouldn’t be considered an expression of hatred, but one of love and a desire to see the country succeed. I would like to think that in a functioning democracy, this should never be anyone’s fear, that their criticism would land them in jail, or worse, a corpse lying on a curb.”

In another post, Lea shared an article about an exhibition of the clothes women wore when they were sexually assaulted or raped. The exhibit sought to highlight that rape and sexual assault doesn’t happen because of what a person wears but because rapists and harassers exist.

“There is no dress code for rape. Stop blaming victims for crimes done against them. Sole responsibility should be on the rapist. Full stop,” she said.

Because of her statements, the “I STAND WITH LEA SALONGA” trended on Twitter. As of 6:30, it was the 5th trending topic on the site. 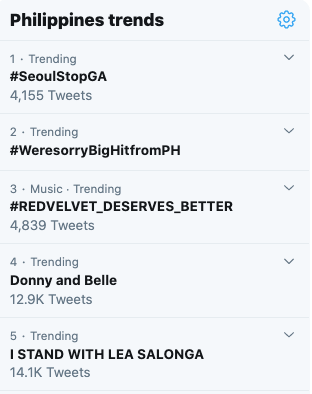 Victim-blaming in the context of sexual harassment, rape, and gender-based violence has been a hot topic in recent days after the Lucban Municipal Police Station posted on Facebook that women should not be wearing revealing clothes to avoid being victims of rape and sexual harassment. Kakie Pangilinan, daughter of Senator Kiko Pangilinan and actress Sharon Cuneta, joined calls to remind people that rape is the fault of the rapist and not the victim.