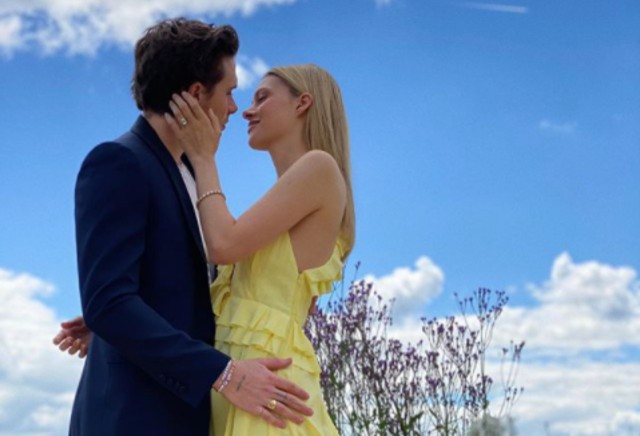 On Instagram, Brooklyn wrote: “Two weeks ago I asked my soulmate to marry me and she said yes. I am the luckiest man in the world. I promise to be the best husband and the best daddy one day. I love you baby.”

Nicola, who starred in The Last Airbender and Transformers: Age of Extinction, posted the same photo with the caption: “You’ve made me the luckiest girl in the world. I can’t wait to spend the rest of my life by your side. Your love is the most precious gift. I love you so so much baby.”

Brooklyn’s mom, fashion designer and Spice Girls member Victoria Beckham, said that she, husband David, and the kids are happy for the couple.

“We could not be happier that @brooklynbeckham and @nicolaannepeltz are getting married! Wishing you so much love and a lifetime of happiness.We all love you both so much.”

Prior to Nicola, Brooklyn was linked to several women, including actress Chloe Grace Moretz.

Brooklyn and Nicola went public with their relationship back in January.

The 21-year-old Brooklyn is known for his work as a photographer and model. He launched a book, titled What I See, back in 2017. He was also tapped by local retail brand Bench to be one of its international faces. – Rappler.com