MANILA, Philippines — The night’s main star would not appear until about 3 hours later. Yet clusters of tween girls were already busy exercising their lungs, periodically piercing the humid Sunday night air last April 22 outside the Smart Araneta Coliseum with shrieks and random shouting of affectionate greetings to a still out-of-sight Greyson Chance.

Adult amusement at this adolescent scenario would be exacerbated by the sight of burly security men shushing such late grade school and early high school girls from showcasing their decibel levels, motioning them away from the still closed Big Dome gates in the presumed hope that the Cubao traffic would muffle their anticipatory screams. 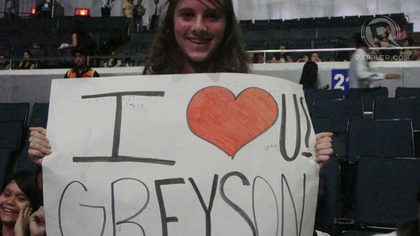 Once inside, heartening hilarity would resume as sporadic shrieking attended every appearance of Chance on … the giant overhead monitor, as a static image in a slideshow of promotional images. With several gal pal clusters perched across the coliseum’s seats, many resumed their shriek streak while also holding up homemade placards, especially when a roving video documentarian from Chance’s entourage encouraged these pre-teens to do so.

A little past 8 p.m., the house lights went out, the glow sticks went up and the mostly young spectators went wild. The venue was filled to approximately 69% capacity (that’s out of 3,000 tickets, per the concert’s ad by organizers Wilbros Live), yet the crowd’s vibe and roar were more than enough to bring the site to life.

The proceedings got all the more sizzling when the members of a four-piece backing band took to their instruments and began rocking the joint, providing a carpet of loudness to usher in opening act Camryn. The Denver, Colorado, native, whose “hidden” surname is Magness and who is just 12 years old, began tearing with glee through what would be a full-on punk-pop set akin to Avril Lavigne.

Quite a far cry it all was from “I Love Justin Bieber,” her raw and candid, YouTube-uploaded love letter to that other boyish pop star which she had set to the Monkees’ radio nugget “I’m a Believer.” Be it due to copyright issues with the Monkees’ label or simply to avoid embarrassing herself, Camryn and company skipped the made-up tune — as did her EP discs sold at the Big Dome lobby.

Still, Camryn did not need that ditty to fill up what wound up to be a loaded, eight-song set list, which included her own 2011 hits “Wait and See,” “Summer” and the downright partylicious “Set the Night on Fire.” She also threw in a cover of pioneer American idol Kelly Clarkson’s “Stronger,” whose message of feminine empowerment most likely inspired many a giggly girl that night to raise a mental fist in the spirit of youth power. She may barely be of high school age but Camryn and her all-adult band — and at one point, her baby brother going cute with a tambourine — sure schooled many an appreciative teenybopper that night on how concerts can be truly fun in downright scorching fashion.

Camryn Hour that night was pretty intense that I wondered amid the din if it was going to make Greyson Chance’s own set sound like a trip to the library.

Yet when a new all-grownup, four-piece band emerged and began rumbling away, and Chance finally emerged then turned around to reveal, showman style, a large, Philippine flag-inspired design patched to the back of his oversize military jacket, all notions of an aurally or visually hushed set got blasted away. If by any chance certain unaware viewers that night — such as my fellow middle-aged parents who chaperoned their kids — came into the gig with no prior awareness of the evening’s chief talent, they might not have figured that Greyson Chance was just age 14. Take away the sight, and shrill sound, of the army of skirted or leggings-donning attendees that night, and focus instead on the discernible melodic deftness of the repertoire, the non-pandering playing of the band (who may as well be backing up, say, Bruce Springsteen) and the elastic tenor and nimble piano-playing of Chance himself and one might conclude that the singer-songwriter-pianist must be at least five years older than reported. (At the press conference the day after, I stopped short of asking him for his birth certificate.)

Yet, adding any amazement at Chance’s dazzling skills is the apparent fact that the young man seems to be handling the stresses of performing per se and doing so miles away from his Edmond, Oklahoma, home plus the pressure of international, Harry Potter-ish adulation rather well. Throughout his practically two hours onstage rendering 15 tunes (counting the encore), he communicated — no, embodied — joy through song and small talk but with nary a hint of condescension or patronization.

And while he occasionally indulged the near-swooning lasses with a precious “I love you, too” or more than once expressed gratitude to his fandom, Chance and crew appeared to have a subtle extra agenda. That is, in the midst of the mania towards the chaste Chance, they seemed intent on not shortchanging the entire audience musically, launching hefty sonic blows into the air like Manny Pacquiao on a good night.

Highlights of the night were aplenty in Greyson’s set. Given that he dished out nearly all of the tracks of his 2011 debut album Hold On ’Til the Night, including “Unfriend You,” “Cheyenne,” “Light Up the Dark,” “Little London Girl” and “Running Away” (the latter released only in Asia, Chance stressed), loyal fans were more than satisfied and were happy to give in to hearty sing-alongs.

But Chance also pulled off what he introduced as “surprises,” which included a commanding cover of the Adele gem “Rolling in the Deep” with just him and acoustic guitar support, and then a rousing take on “Pumped Up Kicks” by the US threesome Foster the People. Particularly impressive as well was his take on Lady Gaga’s “Paparazzi”—not so much with his already awe-inspiring, barebones way with the song, which essentially launched his career just two years ago thanks to YouTube and Ellen DeGeneres, but with how he can confidently alternate ad libbing with his piano-playing intro yet without coming off like a savant or an all-too-exceptional prodigy. Indeed, for all of his musical smarts and vocal and instrumental dexterity, Chance does not come off as an unreachable superstar who is all too unique or gifted to be beyond emulation. As he was serving up his inspirational, emotionally majestic “Waiting Outside the Lines” — a clarion call for the timid to come out of their shell — he may as well be advising audience members to be like him: to follow his lead, take a leap of faith and realize whatever their unfulfilled, positive desires or destinies.

All told, this remarkable teener may as well be inducted into the unofficial club of accomplished singer-songwriter-pianists, with Billy Joel and Elton John as his welcoming party. Perhaps he is likewise smart enough, or at least have been mentored by handlers, to know that shows like these are not just a way to have a blast but also to help sell actual records in this era of music piracy. Yet in the end, Greyson Chance is, quite surprisingly, a significant musical talent. We can even afford a Beatlesque evaluation here, partly for his resembling a very young Paul McCartney: If these are Chance’s years for dishing out his own “Love Me Do” or “I Wanna Hold Your Hand,” here’s looking forward to the kind of chestnuts he can come up with as he grows up before our eyes and ears. – Rappler.com

(Watch our for our video exclusive with Greyson Chance here in RAPPLER, coming soon! RAPPLER welcomes CD and concert reviews from all the music lovers out there. Email us your story with photos with subject heading MUSIC to desk@rappler.com.)