Blood, sex, dragons: Gearing up for ‘Game of Thrones’ 4 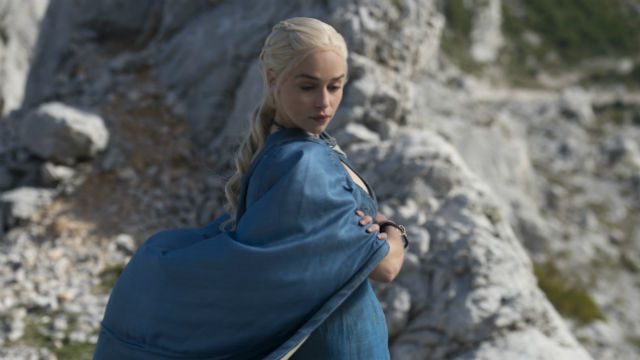 WASHINGTON, USA – There will be blood. And nudity. And dragons.

Millions worldwide will tune in for the 4th season of medieval fantasy drama Game of Thrones from Sunday as the hit show returns to television screens, promising to deliver its usual jaw-dropping mix of sex, violence and vengeance.

(See the photos: Game of Thrones 4 plus 15-minute feature)

Since its debut in 2011, the HBO drama based on George R.R. Martin’s best-selling novels about a struggle for power between feuding clans in seven mythical kingdoms has won a devoted global fan base – President Barack Obama among them, reportedly – to establish itself as the star of the US cable channel’s stable.

The series has wowed critics with its densely layered plot, lavish production values and a readiness to kill off, invariably in gruesome fashion, protagonists who had hitherto seemed integral to the show.

Four words – “No one is safe” – have become the unofficial catchphrase for devotees of the series. Guessing which character may soon meet his or her maker is all part of the fun.

An infamously bloody episode in Season 3, involving a massacre at a wedding party, was one of the most talked about and tweeted television events of 2013.

All the signs are that fans of the show will not be disappointed by the 10-episode Season 4, which airs in the US from Sunday before being screened in different markets worldwide over the following days and weeks.

“Some of the most shocking, mind-blowing scenes of the entire series come from the end of this season,” promised executive producer David Benioff in an extended teaser-trailer screened on HBO ahead of Sunday’s opening episode.

The new season will see the existing rivalries between the various warring factions of the continents of Westeros and Essos face a new threat in the shape of an army of undead zombie warriors from the kingdom’s frozen north.

The ominous, doom-laden warning “Winter is coming” and the plaintive “Where are my dragons?!!”, the cry of the blonde-haired dragon-wrangling warrior queen Daenerys Targaryen, have become cult phrases for the show’s legion of fans.

In the space of three years, the fluctuating fortunes of the Stark, Lannister, Baratheon and Targaryen clans have built a loyal following.

Around 5.4 million watched the final episode of Season 3 on June 9, 2013, although with repeat showings through the following week, the audience was closer to 14 million, a record for HBO.

Just under three million had watched the first season in 2011. According to the website TorrentFreak, Game of Thrones is also the most pirated show on the Internet, with 5.9 illegal downloads of the last episode of Season 3.

For the upcoming season, the creators acknowledged fans were harboring a “tremendous clamor for revenge,” particularly after the blood-soaked wedding depicted in the now notorious episode “The Rains of Castamere”, where the clean-cut hero Robb Stark and his pregnant wife are among those slaughtered.

The new season also promises to be dangerous for Tyrion Lannister, the wily and witty dwarf nobleman played by Peter Dinklage who is one of the show’s most popular characters.

Season 4 also introduces a mysterious new character in the shape of Oberyn Martell, played by Pedro Pascal, who appears at the wedding of the sadistic boy king Joffrey Baratheon (Jack Gleeson) in the opening episode plotting revenge against the Lannister clan.

So far, Game of Thrones has earned a Golden Globe acting award for Dinklage and a clutch of Emmys, mostly in technical categories.

The only problem looming on the horizon is that the television series is in danger of outpacing Martin’s source material.

Martin has so far published 5 of 7 books planned in the series, and the television show is due to catch up to book five sometime in 2015.

Martin admitted in a recent interview with Vanity Fair that the pace of the television show’s production schedule was “alarming” but said he hopes to complete his epic saga before it is due to be filmed.

“I’m hopeful that I can NOT let them catch up with me …it might be tight on the last book,” Martin told Vanity Fair. – Rappler.com

In the Philippines, Game of Thrones will return on April 13, 10pm on HBO and HBO HD