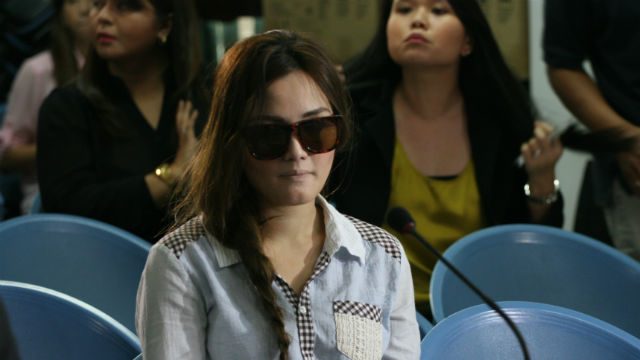 MANILA, Philippines (UPDATED) – Just over two months after the controversial mauling incident involving Vhong Navarro and the group of Cedric Lee, Deniece Cornejo and company, comes news that the Department of Justice has dismissed the rape complaint of Deniece Cornejo.

On the alleged rape, the resolution said that Cornejo’s narrative “demonstrates physical improbability,” given that “it is extremely difficult to comprehend how such scenario of shouting, struggling, and running to the lobby of the Forbeswood Heights Condominium could have escaped the ears of the people in the neighboring units or in the halls of the said condominium; and that her actuation after the tormenting experience, when she admitted going out for dinner with friends, is to a certain degree incredible as it is contrary to human frailty.

“Since Complainant CORNEJO was unable to provide a logical story, the Panel found no probable cause to indict NAVARRO for commission of the crime of rape,” read a part of the resolution.

Howard Calleja, Deniece’s legal counsel, has said that they will not yet comment as they hadn’t received the resolution yet, but that they reserved the right to “proceed with the legal remedies available” for the client, according to a report from ABS-CBN.

Last January, model Deniece Cornejo filed a rape case against the actor for an alleged sexual assault on January 22, the night of a controversial incident which left Navarro severely injured.

According to Navarro, he was attacked and was a victim of extorion by Cornejo, Cedric Lee and their other companions. Meanwhile, Cornejo’s camp said he sustained his injuries after Lee and company caught him attempting to rape Cornejo.

It remains to be seen how the other rape complaints against Navarro will play out.

In February, another complainant, Roxanne Acosta Cabañero, also claimed that she was raped by the actor in April 2010 in Pasig City.

Most recently, another woman came forward to accuse actor-comedian Vhong Navarro of rape, which she said happened in 2009. Reports say that on April 10, Vhong, accompanied by legal counsel Alma Mallonga, filed his counter-affidavit against this rape claim in Quezon City.

Navarro has denied all rape charges against him. – Rappler.com