Kim Chiu on Maja, Gerald issue: Why hold a grudge? 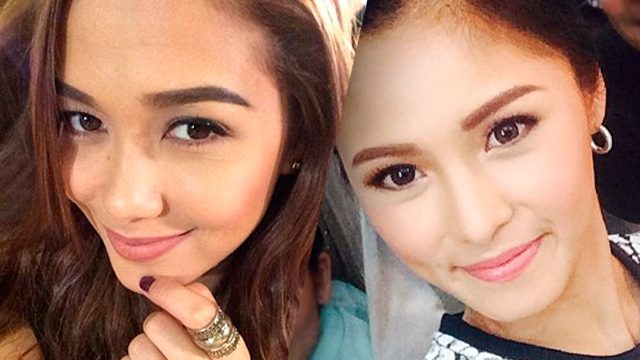 MANILA, Philippines – It’s all water under the bridge.

Actress Kim Chiu finally broke her silence after reports came out that she and ex-boyfriend Gerald Anderson, and former bestfriend Maja Salvador, have reconciled.

Kim, who left for the United States along with other Star Magic artists, told ABS-CBN that she was glad that everything happened days before her birthday.

Kim will celebrate her birthday on April 19.

When asked if this was one of her wishes for her special day, Kim said: “Hindi naman ‘yun plinano, pero parang wala naman na talaga so bakit ka pa magho-hold ng grudge?” (it wasn’t planned but it’s really nothing. Why should I hold a grudge?)

She also said that she is happy that the 3 of them could now move on from the controversy.

In an earlier interview, Gerald confirmed that he and Kim patched things up after a meeting last March.

The feud started in 2013, at the height of the teleserye Ina, Kapatid, Anak when Maja admitted that she started dating Gerald who was Kim’s former boyfriend. That led to the estrangement of the once close friends.

Later that year, Maja confirmed that she and Gerald became a couple.

Maja can currently be seen on the hit show The Legal Wife, while Kim can be seen on Ikaw Lamang, opposite Coco Martin. On the other hand, Gerald stars alongside Anne Curtis in Dyesebel. – Rappler.com