MANILA, Philippines – With less than 24 hours to go before the American Idol 2012 finale, Rappler continues to track online sentiment and social media statistics to see if these provide some indication of this year’s results. For those readers who missed it, we delivered our first report on May 20.

Over-all social media growth in followers and likes continues to favor Jessica Sanchez over Phillip Phillips. Phillip’s Twitter followers have grown by 16,000 followers since the last results were announced on May 18 – a 5.31% increase.

YouTube views arguably provide a deeper level of insight since these highlight their performances. Tracking their latest performance videos as posted on the official American Idol Youtube channel, we see the total views for Jessica’s 3 videos growing by 119% since Rappler started tracking them on May 19. 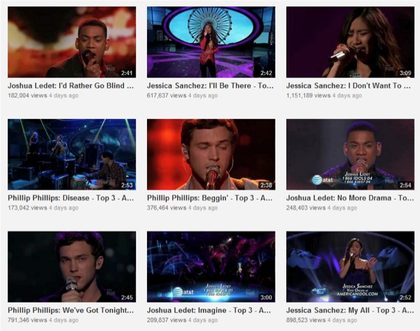 Phillips’ total views for his 3 videos grew by 108% in the same time period. Phillips’ Sunday views grew 2% more than Jessica’s views – nominal but a possible indicator of curiosity and possible interest. Jessica’s videos have a combined 2.67M in views while Phillip has 1.34M views.

While that may seem like a small difference and an even smaller growth, klout scores grow or drop by very small increments everyday – which is why a 1 point increase is a significant thing. They both grew their Kred scores by one point over the same time period. All these together seem to indicate that Jessica continues to bring more online inertia leading into tomorrow’s finals. Turning to online sentiment for both finalists, we see some indicative changes as of the time of this writing.

Online sentiment mines words like “like”, “hate” and gross negatives and positives usually associated with these words like “love” and “go home” across the net. These trackers usually only mine words in English and so Spanish, Tagalog etc. are mostly ignored. Colloquialisms and jargon/net speak are iffy at best.

Socialmention.com shows Jessica’s positive sentiment rising to a 15:1 ratio (the number of positives vs. negatives) as compared to a drop to 9:1 on May 20. Her passion score has also increased to 56% vs. the previous 46% average.

Phillip’s positive sentiment ratio has remained consistent at 4:1 over the past 4 days while his passion score has also increased to 45% vs. his previous average of 31%. Neutrals for both remain very high – an indication that tomorrow’s finals are going to be critical in getting people to make up their minds about them.

Sentiment140.com shows Jessica with a 93% positive rating while Phillip has an 84% positive score. Social sentiment continues to show Jessica with a meaningful lead over Phillip leading up to the American Idol finals. 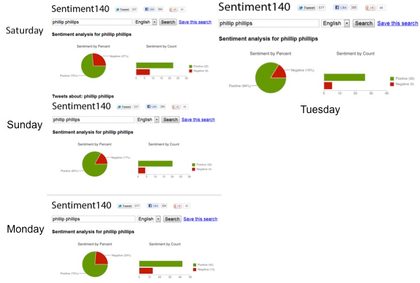 The results continue to indicate continued growth in followers, influence and sentiment in favor of Jessica with less than 24 hours to go before the finals.

All her online metrics are ahead of Phillip’s and the momentum continues to be in her favor. As previously mentioned, the significant number of neutrals indicates that their finals performance will ultimately swing voters one way or the other.

Rappler will be tracking online sentiment over the all-important finals and the even more critical voting window immediately after the show for indicators as to how the audience voted. – Rappler.com

Click on the links below for more news on American Idol.