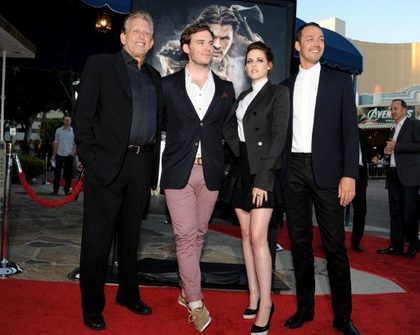 LOS ANGELES, California – “Snow White and the Huntsman” was the fairest of them all at the North American box office over the weekend with a $56.3 million debut, industry estimates showed Sunday, June 3.

The film starring Charlize Theron and Kristen Stewart of “Twilight” fame, which offers a new twist on the classic fairy tale, knocked the sci-fi comedy sequel “Men in Black 3” off the top of the charts.

The reunion of Will Smith and Tommy Lee Jones as secret agents battling aliens living on Earth, which topped the box office charts last weekend, took second place with $29.3 million, according to Exhibitor Relations.

In third place was comic book superhero blockbuster “The Avengers,” pocketing $20.3 million. It has so far taken in $552.7 million in North America.

The film has become the highest-grossing movie in Walt Disney Studios’ history with global earnings so far of almost $1.4 billion, the third-highest total of all time.

“The Avengers” maintained its lead over the big-budget but critically panned “Battleship,” which dropped to the number four spot in its third weekend with $4.8 million in box office receipts.

In fifth was comedian Sacha Baron Cohen’s “The Dictator,” at $4.7 million.

“The Best Exotic Marigold Hotel,” a comedic drama about British retirees in India, took in $4.6 million for sixth place.

Keeping its seventh place was romantic comedy “What to Expect When You’re Expecting,” about five interconnected couples sharing the experience of having a baby, with $4.4 million.

Ninth place went to horror flick “Chernobyl Diaries.” The tale of a group of tourists taking a disastrous tour of the ghost town of Pripyat in Ukraine, abandoned after the 1980s nuclear disaster, made $3 million.

Rounding out the top 10 was “For Greater Glory,” a chronicle of the Cristero War of 1926-29, an uprising against the Mexican government also known as the Cristiada. It took in $1.8 million on its debut weekend.

Final figures were due out on Monday, June 4. – Agence France-Presse