[Movies] ‘Snow White and the Huntsman’: A series of almost-there-but-not-quite moments

Jun 4, 2012 8:40 PM PHT
Amyline Ching
Facebook Twitter Copy URL
Copied
The movie may be grossing bills in the U.S., but may disappoint if one is looking for 'energy' MANILA, Philippines – With big-ticket stars at the helm and a great story concept, “Snow White and the Huntsman” has the makings of a classic; but this fairytale adaptation of the Grimm classic’s lack of focus and undeveloped characters drains its promise to an even paler version of Snow White, if that’s even possible.

The movie is a series of almost-there-but-not-quite moments that are anti-climactic, except perhaps its stunning special effects and set design, which already “shatters” the competition, mere minutes from the opening credits.

The movie opens with a picturesque garden scene that even in Winter heats up the screen. Pacing is good as it shows Snow White’s early life right up to her mother’s death and a battle that shows the movie’s powerful effects to advantage. Enemies that shatter when struck by swords fill the screen with shards of glass flying from every direction. It is an exciting, exhilarating start … a momentum that it fails to maintain or even repeat, even in the film’s “climactic” final battle.

Like “Ever After,” the movie reinvents the princess-in-distress into a heroine who can fight her own battles. The feminist take on Snow White is a refreshing and welcome change from the often tame portrayal of the heroine.

But the strength in Snow White (Kristen Stewart) never gets the chance to develop, what with two eager “knights,” the Huntsman (Chris Hemsworth) and William (Sam Claflin) fighting for her and over her. It is only right at the end when she is able to redeem herself, rallying her people to fight against the Queen. But even then, her speech lacks strength and power, both with her delivery and the dialogue itself. 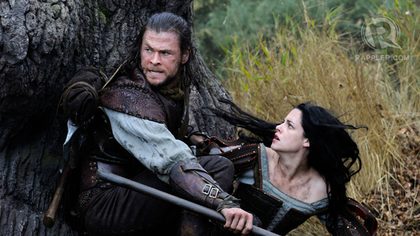 Even the love theme and the supposed love triangle are half-baked as are the characters of her love interests. The Huntsman, while eliciting quite an excitement among the women viewers, is too preoccupied with his dead wife and later on, with protecting Snow White to endear himself to the audience. There is no romantic tension either between Snow White and the Huntsman or Snow White and William. The closest is a kissing scene with William that turns out to be bogus.

Even after the Huntsman kisses Snow White to life, there is nothing. If anything, it becomes quite awkward.

The evil queen’s back story is another great concept. Her vampirish need to drink from women’s youth to survive gives the character depth and purpose that are more believable than the usually-portrayed deranged need to be “the most beautiful woman in the land.” But, unlike Snow White or her love interests, this is the story that becomes central to the movie. From her costumes to her shocking appetite for human and animal hearts, her see-saw from hag to youthful beauty to her transformation to a hundred ravens, Queen Ravenna (Charlize Theron) has the spotlight trained on her, so much so that the movie should have been titled, “Snow White and the Queen” instead; or, better yet, just “Queen Ravenna.” It would certainly have solved the story’s lack of focus.

The movie’s saving graces are its fantastic special effects and strong visuals. Costumes are elaborate and out of this world — especially those of Queen Ravenna — and yet totally right for the movie. The setting is just perfection and cinematography, near flawless. Even the cast members are all visually arresting, from the Queen right down to the 8 dwarfs.

In this arena, Snow White and the Huntsman reign supreme and it definitely do not disappoint. In fact, they are so much of eye candies that people would find the movie enjoyable and entertaining if they “look” hard enough and do nothing else. – Rappler.com