Aug 27, 2014 9:57 PM PHT
Alexa Villano
Facebook Twitter Copy URL
Copied
The actress says receiving the award is one of the most important things to happen in her life 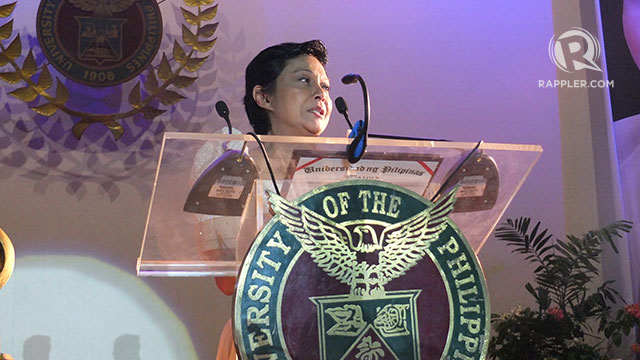 MANILA, Philippines  – Superstar Nora Aunor was recognized by the University of the Philippines this year, awarding her the Gawad Plaridel Award at the UP Film Center, Wednesday, August 27.

The award named after Marcelo H. del Pilar is given to a Filipino media practitioner who has achieved success in the field of film, print, TV and radio.  (READ: Nora Aunor to receive 2014 UP Gawad Plaridel Award)

(This a big honor and I will never forge this. this is one of the important moments that happened in my life. With the honor given by UP, I feel like I finished school as well.)

During her the talk attended by teachers and students from UP and other schools, the actress said that she only finished until Grade 2. She also shared her humble beginnings on how she started as a singer, an actress, and eventually as a movie producer.

Aunor or Ate Guy also said that she was a big fan of her good friend and rival Vilma Santos, who was given the  same award in 2005.

In an interview with reporters after the ceremony, Aunor said that she is happy since the award was given by the university and its teachers.

(What I am feeling is different. It is different when it is UP that gives you the honor. As I said awhile ago, I only finished until Grade 2, but when I stood on the UP stage, I felt like I graduated from the university. I am very happy.)

(Of course I am very happy, because while other people have not recognized me, its the people, the students and teachers who give me the honor.)

Aunor, who recently won Best Actress in the directors showcase category at the Cinemalaya Awards for the movie Hustisya, also said that she eventually plans to go back to making more movies.

The UP Gawad Plaridel Award is the latest achievement for the actress, after the controversy surrounding the removal of her name from the final list of this year’s National Artists.

On July 1, President Benigno Aquino III spoke about the issue, saying that Aunor’s name was removed due to her drug case in 2005.

But the lawyer of the actress in the United States, Claire Navarro Espina, said the actress was never convicted of any crime involving drugs when she was in the Los Angeles. – Rappler.com