Sep 6, 2014 11:47 PM PHT
Rappler.com
Facebook Twitter Copy URL
Copied
Plus, highlights from the show and the list of other award winners
MANILA, Philippines – Apart from the red carpet, the annual Star Magic Ball also awards the belles (and striking gents) of the ball, along with sponsors’ awards and the presentation of the Star Magic catalogue 2015. The catalog highlights next year’s talents on the Star Magic roster.

For photos of the couples and twosomes who made their way down the red carpet together, click here. 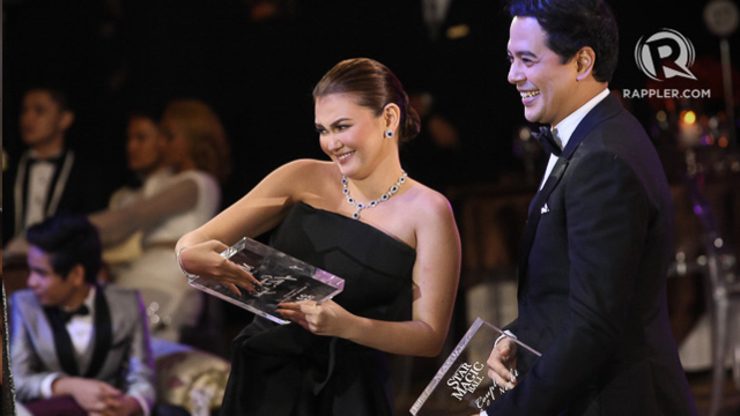 The guests were seated at tables surrounding the dancefloor/stage.

To start off the program, singer Martin Nievera, with the help of the ABS-CBN Philharmonic Orchestra, serenaded the crowd with a couple of songs. He walked into the audience of fellow celebrities offering random people the microphone to sings bits of the song.

During his second song, he pulled Richard Gomez into the dance floor and they sang a duet that had the crowd cracking up. Klarisse de Guzman, whose birthday also happens to be today, then gave her own song performance and ended with a joke: “Thank you for coming to my birthday party!”

Ernie Lopez, Head of ABS-CBN Publishing, then showed the guests a little teaser of the 2015 catalogue, a black and white portrait of a mystery female star, but he never revealed who the cover girl was. A group of six then took to the stage to sign a lively tribute to the newly re-opened broadway musical, Miss Saigon.

Once the guests had calmed down from the rousing performance, Megan Young, accompanied by the night’s host Martin Nievera, announced that she was donating money to the charities of the Miss World Foundation. – with reports from Nile Villa and Alexa Villano/Rappler.com