Facebook Twitter Copy URL
Copied
Who's dated whom? We break down 4 major relationships, with all the parties likely to encounter one another at the Star Magic Ball

These all come to a head at the Star Magic Ball every year, which is highly anticipated not only for the glamorous gowns and glitzy setting, but also because fans get to see many of the country’s biggest stars all under one roof. (READ: In Photos: 6 sweet moments at Star Magic Ball 2014)

Inevitably, exes are forced to see each other, those newly dating make their debut, and in some cases (we’re looking at the famous 2011 incident), fights ensue. (READ: 9 PH celebrity breakups: Where are they now?)

Let’s take a look at some of the intertwining relationships springing from our favorite stars’ previous dating histories. (READ: In Photos: Red carpet, Star Magic Ball 2014) Kim Chiu grew up before fans’ eyes, and her followers delighted in her blooming relationship with hunky star Gerald Anderson, with whom she attended the Star Magic Ball in 2008 and 2009.

They also went to the ball together in 2010, but later, Gerald was spotted leaving with actress Bea Alonzo, who was accompanied by Zanjoe Marudo that evening – this was before they were a couple.

In her 2013 Yes cover story, Bea admitted that she and Gerald were previously in a short-lived relationship. She is now happy with her relationship with Zanjoe.

After the pair broke up in 2010, Gerald started dating Kim’s good friend, actress Maja Salvador, which led to a falling out between Maja and Kim. This was even more awkward because the two were filming a hit teleserye together at the height of the conflict, playing sisters in Ina, Kapatid, Anak.

Earlier this year, the two reportedly resolved their conflict, with Kim, Maja and Gerald saying in interviews that things were now better between them.

Kim had all eyes on her as she arrived with rumored beau and co-star Xian Lim at the 2014 ball.

She’s expected to attend with Xian again this year. Meanwhile, Gerald and Maja confirmed their breakup earlier this year, but both are still expected to be at the ball.

Will things be awkward? It’s never easy to see an ex again, but it won’t be the first time they’ve seen each other after the breakup, given that they work closely together and are associated with the same network. Aside from Gerald, another one of Maja’s exes was there too in 2014 – Matteo Guidicelli, who is currently dating The Voice coach and singer Sarah Geronimo.

Showbiz fans will remember that Matteo got into a fight with actor Coco Martin in the 2011 Star Magic Ball, reportedly over Maja.

Reports said that Matteo, who was dating Maja at the time, was jealous of Coco, Maja’s co-star in the popular teleserye Minsan Lang Kita Iibigin. The incident was quickly diffused. Maja later appeared in an episode of The Buzz to confirm that she was the reason for the fight, but did not give a specific explanation.

In 2014, both Coco and Matteo arrived alone, with Matteo telling ABS-CBN that Sarah couldn’t make it due to other work commitments.

But here’s what a lot of fans are wondering – will Matteo attend this year? Could Sarah possibly make an appearance? Sarah previously supported Matteo at the recent Ironman triathlon, and fans are hoping to see the gorgeous pair together on the red carpet.

Coco and Maja are also working together on a TV version of Ang Probinsyano, the 1997 movie starring Fernando Poe, Jr. Will they walk the red carpet together? 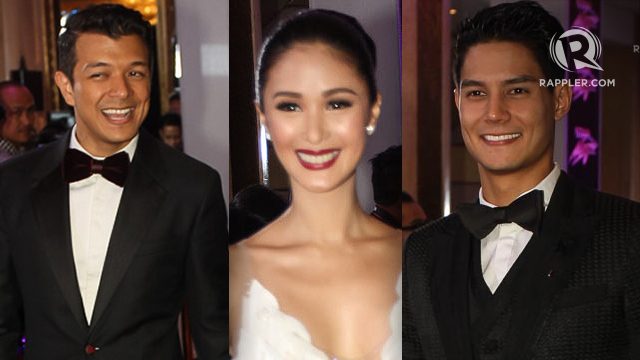 At the 2014 Star Magic Ball, one of the belles of the evening was actress Heart Evangelista, who arrived with husband (then just her fiance), senator Chiz Escudero. The two got married in Balesin earlier this year.

Jericho has long since wished Heart well in previous interviews, as has Daniel, so things were not as awkward as they usually are when you’re in the same room as not one, but two exes.

This year, Echo is set to attend, possibly with Kim again. And fans of DanRich, Daniel and girlfriend Erich Gonzales, are most definitely hoping to see them on the red carpet. (READ: How Erich Gonzales and Daniel Matsunaga became an item) 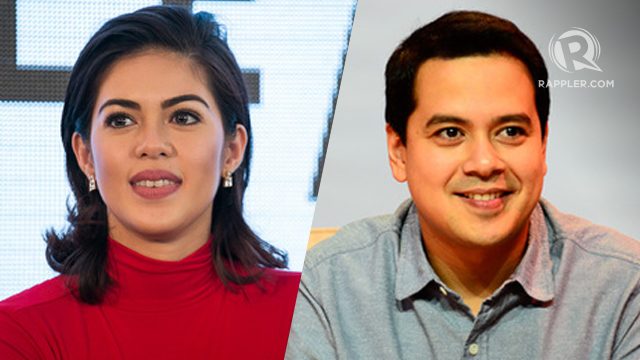 That was John Lloyd and Angelica’s second year to attend together. Later that night, the happy pair took home the Couple of the Night award.

Both are expected to attend the ball this year. Both Shaina and John Lloyd have previously said that seeing each other is not awkward at all – John Lloyd even made a guest appearance in Nathaniel earlier this year. Shaina’s a regular cast member on that show.

John Lloyd and Shaina became a couple sometime in 2010 and parted ways in 2012.

(I mean how many years has it been, how many Star Magic Balls gone by and there have been may parties where we’ve seen each other.)

Who are your favorite couples, tandems, or loveteams? Who are you especially excited to see at the 2015 Star Magic Ball? Let us know in the comments below. – Rappler.com