Jun 15, 2012 8:27 AM PHT
Rhea Catada
Facebook Twitter Copy URL
Copied
Friday night commute needn't be boring when you have a rockstar for company MANILA, Philippines – Every commuter’s nightmare — opportunistic cab drivers, unbelievably long queues at the train station, seemingly unmoving traffic — they all come to life, and with intensified force every Friday night.

Being one of those with a 9 AM-5 PM job, you pray that you can punch out early, lest, you become part of this metropolis chaos. Curiously, though, work doubles when the work week is about to end. Last minute meetings, last minute assignments. So, like the rest of the working class coming from Makati (or perhaps Ortigas) you join this weekly scourge on the road.

Having survived equally dire situations before, you know you can only get through this with music. So you turn to your MP3 player to assuage you. And, as if rock deities are upon you, it is freshly sync-ed with new music: Jack White’s recently-released solo debut album, “Blunderbuss.”

A guitar god in your MP3 player

It didn’t take much convincing from long-time Jack White fans for us to agree that he really can live up to his guitar god reputation. Even if he didn’t star alongside guitar legends Jimmy Page and the Edge for the rockumentary “It Might Get Loud,” his 15-year musical career alone would be evidence enough of how prolific he is as a songwriter, guitarist, drummer and eventually record producer.

As one-half of the now-defunct band White Stripes (with ex-wife Meg White) that started in the late ’90s, he became known for successfully going against the direction of where the music industry was heading at that time. Whereas everyone was doing different versions of alternative rock and electronic music, White Stripes was re-introducing blues, tempered by their own brand of garage and punk rock.

The American musician’s genius didn’t stop at White Stripes. As most of us would know, he also went on to venture with other acts: as the co-frontman of the Nashville-based The Raconteurs, playing blues and folk rock alongside old-time friends; and as the drummer of the blues and psychedelic rock outfit The Dead Weather, where he let The Kills’ Alison Mosshart take the lead as vocalist.

Although his signature take on blues and garage rock has become like a watermark plastered on every musical endeavor he took, it would seem like he never really made them about himself. It has always been about the band, the theatrics, the transformation of women into rock goddesses (Meg White and Alison Mosshart, even his recent ex-wife Karen Elson). He seemed to be content taking the back seat most of the time, even though everyone was going “This is Jack White!” regardless of what song from whichever of his band they were listening to.

So, when he released his first solo album, under his own label Third Man Records, there came varied reactions from both fans and critics. What took him so long? Why only now? Where will this take him?

Whatever reactions or questions were raised, everyone had the same curiosity as to what he has to offer with “Blunderbuss.”

Standing inside a packed bus that is barely moving and is stuck in the middle of EDSA traffic, you fidget with your old MP3 player, tapped it for the first song of Blunderbuss, “Missing Pieces.”

In the first song, White sings about nosebleeds, about arms and legs missing — if it weren’t for the country soul Rhodes piano instrumentation, this would have been considered an aural assault considering that being cramped inside a packed bus can easily conjure images of blood and decapitation. Then, from those excruciating mental images, the song ends to a stanza that tells you what White has been agitating about in the first place:

“Sometimes someone controls everything about you / And when they tell you that they just can’t live without you / They ain’t lyin’, they’ll take pieces of you / And they’ll stand above you and walk away / That’s right and take a part of you with them.”

Shuffling through “Blunderbuss” will lead to other tracks that also conjure painful imagery as well as heartbreak, about how love can tear one’s victim apart. All these laid out in garage rock, country-blues and soul.

In “Love Interruption” for instance, he sings:

“I want love to roll me over slowly / Stick a knife inside me / And twist it all around,” then choruses to, “I won’t let love disrupt, corrupt, or interrupt me anymore.” With the combination of Wurlitzer, clarinet and White’s voice against that of recent ex Karen Elson, “Love Interruption” can easily be an instant favorite.

More rough love and male scorn comes to the fore with the song “Hypocritical Kiss.” If Adele’s album last year (“21”) gave women an outlet for their break-up blues, this album, especially this song, shows how it is from a man’s perspective: it tries to excuse himself for his outburst.

“My temper got the best of me / And when I said that I mean / I know every single thing that I said was true,” and indignation, “And who the hell’s impressed by you? / I want a name for people that I know who are falling for this.” 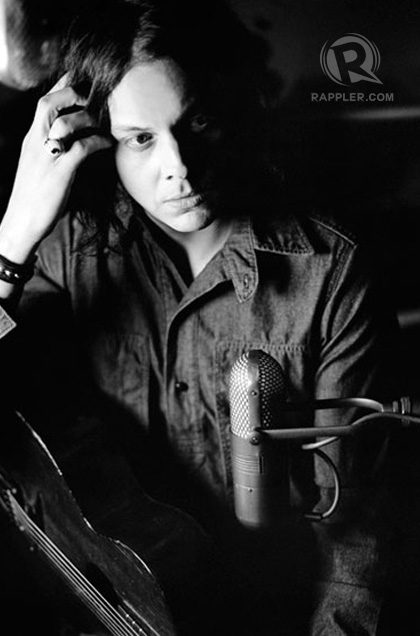 With the general theme of love and loss, it’s easy to assume that this is the aftermath of the break-up of his 6-year marriage with Elson. But considering that Elson lent her voice in some tracks (even singing the lines with the harshest messages), it can easily be just White playing another trick on us, with his trademark smirk telling us, “I’m just messing with you, like how I messed with everyone of you when I said [ex-wife] Meg White was my sister.”

And as you near your bus stop, the last song, “Take Me With You When You Go,” begins on your MP3 player, as if coaxing you to go on another round of “Blunderbuss,” to do more “over-analyzing” of the mystery behind the album, to scrutinize each track, each nuance:

“Take me with you when you go, girl / Take me anywhere you ho / I’ve got nothin’ here but me, babe.” – Rappler.com