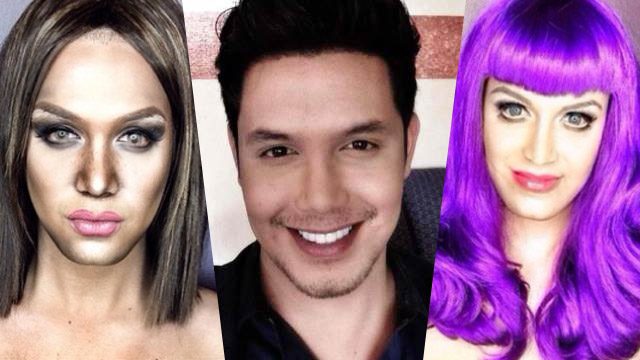 MANILA, Philippines – Actor and host Paolo Ballesteros is well known online not only for his hosting on popular variety show Eat Bulaga, but also for his considerable makeup skills, all showcased on Instagram. (READ: Netizens take on #MakeupTransformation challenge)

Starting in showbiz as a young actor and teen heartthrob, he appeared in shows such as Dyesebel, Love to Love, Daddy Di Do Du, and Kidlat.

He later portrayed gay characters such as the Walter/Warla in Kidlat starring Derek Ramsay and the movie D’ Kilabots Pogi Brothers Weh?!

His portrayal of gay roles had many people wondering about his sexuality, but for Paolo, he is who he is, unapologetically. He talked about this in a 2013 interview with The Philippine Star‘s Supreme section. “Wala akong tinatago. Kung anong makikita niyo, yun na. Ngayon kung magtatanong kayo kung bakla ako, sasabihin ko hindi. Bahala na kayong malito. (I’m not hiding anything. What you see is what you get. Now if you’re asking if I’m gay, I’ll say no. It’s up to you to be confused.),” he said.

Paolo was hospitalized last September after he suffered a mild stroke, but that’s not stopping him from having fun with more makeup transformations, where he turns into everyone from Miley Cyrus to Maleficient.

Recently, he transformed himself into actress and good friend Marian Rivera. We wonder what Dingdong thinks of that?

In an interview with Pep last May, Paolo said that two of his favorite impersonations are Angelina Jolie and Mariah Carey.

(Angelina is very easy to do. I put big lips and I look like her already.)

(But my favorite is Mariah Carey. I find it funny, with the character I do on Eat Bulaga.)

(With Angelina, she is beautiful, but Mariah performs. I do something that I just kind of whistle. So that is why she is my favorite.)

Through makeup, wigs and contact lenses, he achieves a unique look each time. Here are 12 of Paolo’s interesting, varied transformations:

Do you have any favorite make-up transformations of Paolo? Share them with us in the comments section below. – Rappler.com