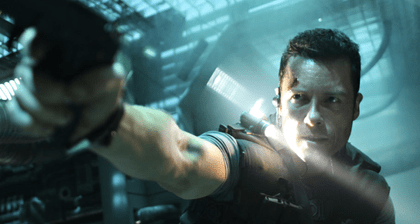 MANILA, Philippines – The funniest new movie to open in the Philippines this past week is not Rock of Ages (the Broadway musical’s feel-good cheesiness apparently got lost in director Adam Shankman’s adaptation). Nor is it ha-ha gal Eugene Domingo’s Kimmy Dora and the Temple of Kiyeme (a lackluster comedy on the outside, an effects-laden horror movie on the inside).

No, the funniest new moviehouse filler this past week is Lockout, the latest flick to be “presented” by French filmmaker Luc Besson. Lockout, however, is not even a comedy; it’s more of a hybrid of Hollywood-style action and CGI-loaded science fiction, the potential offspring should Die Hard and Alien go on a lascivious honeymoon. For starters, Lockout is preposterous and lacks any pretensions of originality. As scripted by Stephen St. Leger and James Mather (both the whole thing’s directors, too), “based on a story idea” by Besson, the film envisions the year 2079 as a time when, just like in this year’s Men in Black III, criminal elements can be fully isolated from mankind by being locked up in “MS One,” a maximum-security facility located outside the Earth’s atmosphere. (To be sure, MIB III’s off-planet jail is on the moon, while Lockout’s is in orbit around our big blue globe.)

Soon enough, the supposedly impenetrable MS One is disproved as such, the mayhem set in motion by a hothead member of a “humanitarian” contingent led by Emily Warnock (played by the functional Maggie Grace). She’s there to check if MS One’s inmates are not being subjected to inhuman experiments, a plot point that is no more than an underused narrative firestarter. Chaos inevitably ensues, the rioting prisoners take over the prison and Warnock, who happens to be the daughter of the “56th US President,” is taken hostage. (Grace herself had played a captive in Luc Besson’s Taken.) Somehow, despite the vast resources at the US government’s disposal, the rescue mission gets delegated to One Man, The One, Him vs. Hundreds, whose name is John McClane Rambo.

Okay, in Lockout, his name is Agent Snow, a former CIA operative accused of a murder he may or may not have committed. In exchange for federal clemency, he is given the assignment of retrieving Emily from MS One all by himself, a suicide mission that could make Sylvester Stallone blush. Agent Snow is not fully qualified for the job but he is, after all, a fearless, devil-may-care badass, so off he goes into outer-space hell.

Any viewer complaints about how Lockout echoes several of its predecessors, such as director John Carpenter’s Escape from New York and Besson’s own Taken, are kept at bay by the movie’s frenetic pace. There is little creative ambition here and its directorial duo prefers to drown out such perceptions by keeping things visually and aurally busy. St. Leger and Mather thus come off not as serious filmmakers but more like two overgrown boys caught in an intense video game marathon.

(To be fair, some of the CGI work in Lockout is seamless and lifelike, and there is this stunt-filled sequence involving “anti-gravity torsion” that, although utterly brief, hints at the flights of fancy the movie could have taken further had its makers been more enterprising.) The one bright spot in Lockout is also the second and better reason why it’s intermittently hilarious: the one-two punch of the Agent Snow character and the actor portraying him, Guy Pearce.

Pearce has long been an acting heavyweight who has superbly played diverse roles, be it as a drag queen (The Adventures of Priscilla, Queen of the Desert) or a would-be king (The King’s Speech), as an amnesiac killer (Memento, his best lead-starring gig) or a by-the-book cop (L.A. Confidential).

As Agent Snow, Guy Pearce finally gets to play an anti-hero, the kind of man who can save the day yet not give much of a damn, a dude who can spew sarcastic quips even while spewing blood during a “punchy” interrogation. (Sample: “Everyone loves me. Just ask your wife.” Or when Snow and Emily fall off a ceiling and her lips land too close to his crotch, he goes, “Oh, no need for that. ‘Thank you’ would have been enough.”)

Pearce, all bulked up for the part, is game as both an action hero and a fount of humor. The Australian actor manages to extract perverse charm out of being an arrogant prick, even if the Lockout is far more shallow and conventional than his usual fare. (All of his running around and attitude here may as well be a warm-up for his antagonist role in next year’s Iron Man 3.) Runner-up recognition goes to Joseph Gilgun, a fine English actor who deftly plays Lockout’s token loose cannon, a Mr. Hyde-like madman named Hydell. Gilgun’s Hydell would not have been out of place in Danny Boyle’s famed adaptation of Trainspotting. However, it is reliable supporting actor Peter Stormare, oozing entertaining fiendishness anew despite minimal screen time, who gets to spout Lockout’s top piss-off line; at one point he tells the stubborn Snow, “When I need your opinion, I’ll give it to you!”

Besson may as well be saying that exact same nakaka-lalaki line to his critics, who deem recent, tough-guy outings bearing his name as his cunning, cinematic way of earning cash from trash. Noted, Mr. Besson, but when you churn out more satisfying work and perhaps need our praise, we’ll give it to you, too. – Rappler.com

Click on the links below for more movie reviews.