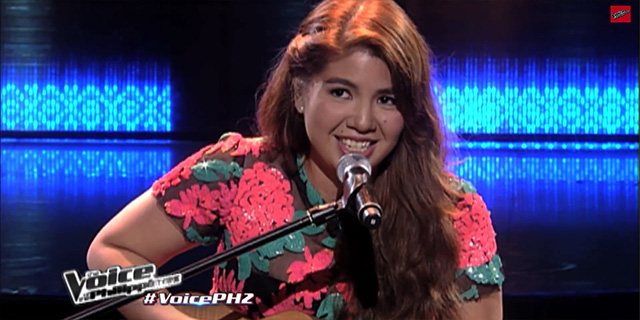 MANILA, Philippines – Kai Honasan, daughter of Sen. Gringo Honasan, is part of The Voice of The Philippines.

Kai performed the song “Teenage Dream” for her blind audition and got positive attention from all 4 judges in the episode that aired Sunday, November 2.

(The song is familiar to everyone who is here. So, you sat there with a ukulele and it was just perfection. It was beautiful, very cool to the ears. So I hope you choose my team.)

“Who has been crazy enough, brave enough, to bring artists like yourself forward to battles, forward to the semis. People say, ‘Hindi ‘to bumabagay (This does not fit), it doesn’t fit sort of a spectrum.’ Sa akin (To me), it doesn’t matter. Ako, it’s about artistry, it’s about growth…Ako lang, I think I’ll be a good coach, right, Dad?” Bamboo said when the senator came out in the audience.

Kai eventually chose Bamboo’s team, saying she felt their musical styles were suited to each other.

When asked about what he thought of his daughter joining the competition, Sen. Honasan said: “We just pray and hope that the audience appreciates my daughter’s message, whatever the results are.”

According to her biography, Kai, 25 works as artist relations manager. Aside from having a famous father in politics, her sister-in-law Barbie Almalbis is also a popular musician, married to her brother Martin.

The blind auditions of The Voice of the Philippines will continue on Saturday, November 8. – Rappler.com