MANILA, Philippines – Social media is abuzz with fans guessing who the newest Bench endorser is.

The brand has been leaving clues on Twitter, teasing their fans to start guessing.

This is what we found in “liam hemsworth | Tumblr”: 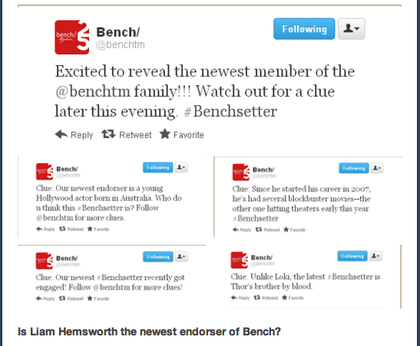 The image was posted by hungergamesphils.

A host of Hollywood’s hottest stars have been endorsing local retail brands, including Ian Somerhalder of the TV series “Vampire Diaries” and Leighton Meester of “Gossip Girl.” Somerhalder arrived in Manila last May to shoot a campaign with Penshoppe, known to be the closest “rival” of Bench. Then on Philippine Fashion Week Holiday 2012, Meester walked the runway also for Penshoppe.

Bench, meanwhile, brought “America’s Next Top Model” alumna Allison Harvard and Dominique Reighard to Manila to walk for Michael Cinco’s fashion show, “Impalpable,” and to shoot a campaign for Bench.

Hemsworth is freshly-engaged to Miley Cyrus. He stole the hearts of fans around the world as Gale in “The Hunger Games.”

And, of course, for Avengers fans, he is the younger brother of Thor, Chris Hemsworth. (We’re one step closer to Thor — maybe!)

Have the local retail brand wars gone to Hollywood? What do you think? Post your comments below. – Rappler.com