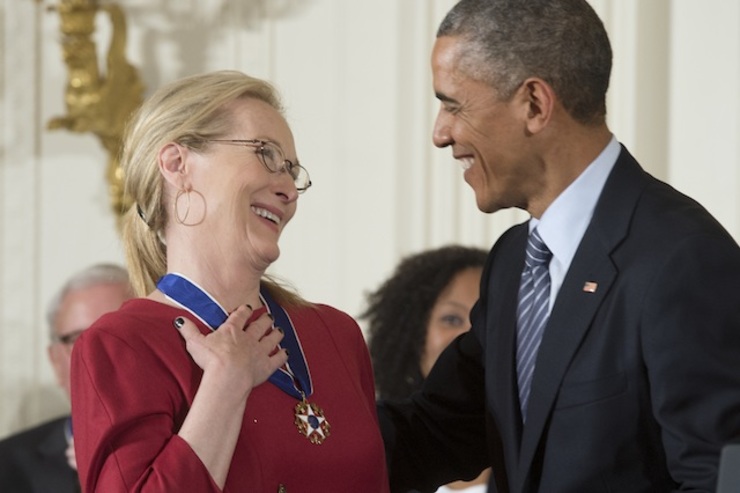 WASHINGTON DC, USA – United States President Barack Obama said he is in love, though he was not speaking about Michelle – but he swears she understands.

A smiling Obama showered Streep with praise, complimenting the Out of Africa actress for her ability to embody the characters she plays.

“She inhabits her characters so fully and compassionately,” he said of the 3-time Oscar winner at the ceremony at the White House.

He also applauded her musical capabilities and her impressive ability to speak with any accent.

“She’s sung ABBA, which, you know, that’s something. She learned violin, wore a nun’s habit, faced down a charging lion, mastered every accent under the sun.

“Meryl is truly one of America’s leading ladies.”

Streep won an Oscar in 2012 for her role as Margaret Thatcher in The Iron Lady. She took home her first golden statue in 1980 for Kramer vs. Kramer and another in 1983 for Sophie’s Choice.

Obama also honored Motown legend Wonder, whose album Talking Book was the first he ever bought.

“What really defines Stevie’s music is the warmth and humanity that resonates in every note. Some of his songs helped us to fall in love. Others mended our hearts. Some motivated us on the campaign trail,” he said.

The economist Robert Solow and John Dingell, the longest-serving member of US congress, were also awarded. – Rappler.com