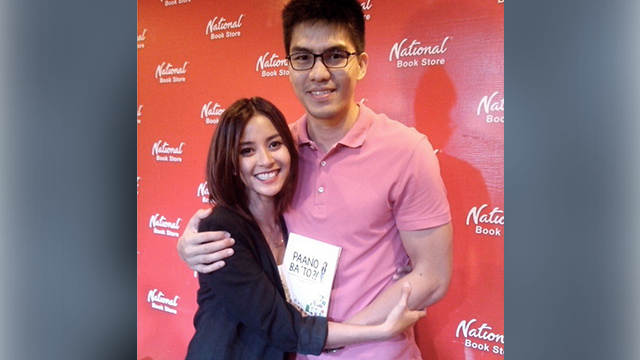 MANILA, Philippines – Bride-to-be Bianca Gonzalez said that despite the big reception she and fiancé JC Intal will be holding on their wedding day, it will still have the relaxed and chill vibe they want.

“It still is [a relaxed wedding] but the compromise there was since my dream wedding is small and intimate, we are having the ceremony private and very chill. The reception naman which is big, I think it’s still very chill, but the venue is just big. But we really only invited a few friends. It’s really more kain, inom, kuwentuhan (eat, drink, catching up with friends) and music,” she said during the signing of her book Paano Ba To?! How to Survive Growing Up, Sunday, November 30.

“I have been relaxed. I always say that when they ask me, I always call myself Bridechilla, not Bridezilla. I love preparing the wedding.”

Bianca said that she and JC were both surprised by the attention their upcoming wedding has gotten. (READ: WATCH: Bianca Gonzalez and JC Intal’s pre-wedding video teaser)

“I am surprised. I think it’s really the year of love so people really enjoy it, seeing the posts of weddings and of the couples.”

Meanwhile, in a separate interview with Pep, she said that she and JC will immediately go back to work after the wedding. The honeymoon, she said, will be in South America sometime next year.

“Habang bata pa kami, habang may pera pa, habang wala pang anak, dun na kami sa pinakamalayo, sa pinakamahal.”  (While we are still young, while we have the money and we don’t have kids, we will go to the more distant and pricier destinations first.)

She also said that she and JC have decided to defer having a baby for the mean time.

“I wouldn’t say I’m not ready, pero parang for me, gusto ko yata muna i-enjoy na kaming dalawa lang before having another responsibility.

“Pero ang sinabi ko naman kay JC, kahit one year, hindi naman yung matagal, kasi I’m getting older na rin. (But I told JC even for one year, it’s not really that long because I am getting older.)