MANILA, Philippines – Singers Angeline Quinto and Jed Madela were among the performers at the Inter-religious and Encounter of Youth program at the Unviersity of the Sto.Tomas, Sunday January 18. Watch the live stream here, and play it back to see the performances.

Jamie Rivera performed “We Are All God’s Children” as well. This was her second time to sing for the Pope – the first time was at the meeting with families at the MOA Arena.

Angeline sang “You Raise Me Up,” while Jed peformed “The Light Of A Million Mornings.” It was earlier reported that Angeline was going to sing the song “On Eagle’s Wings.”

Angeline said that the gathering shows how one big family the Filipinos are.

“Kahit wala si Pope, sana tuloy tuloy pananalig nila,” she said. (Even without the Pope, I hope their faith will continue.)

Jed meanwhile said it was an honor for him to be part of a big celebration.

“It’s a very overwhelming experience especially it’s for the youth… It gives me pride to be used an instrument,” he said.

The singer almost did not make it to UST after many roads were closed for the event.

Here are a few photos. 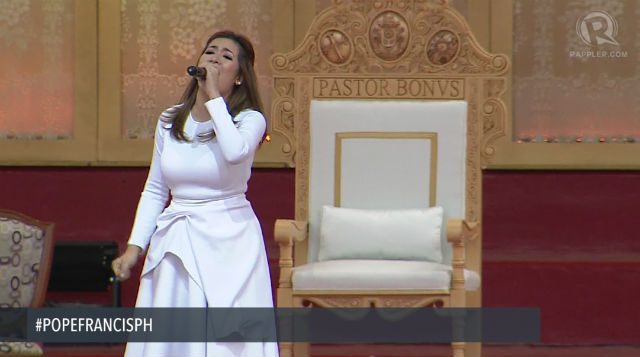 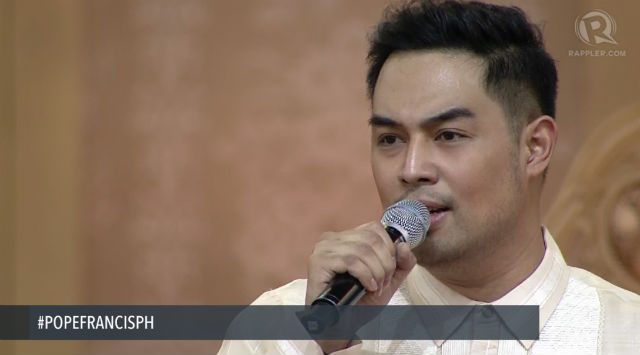 Star Magic shared a photo of Jed, Angeline, Jamie and Darren Espanto, sang “Tell The World Of His Love.” (READ: Darren Espanto on the honor of singing for Pope Francis)

Pope Francis will hold a dialogue with the youth at UST before heading to the Quirino Grandstand for the final mass at 3pm (read about the meaning behind the floral set-up here.) –Rappler.com