Darren Espanto on the honor of singing for Pope Francis 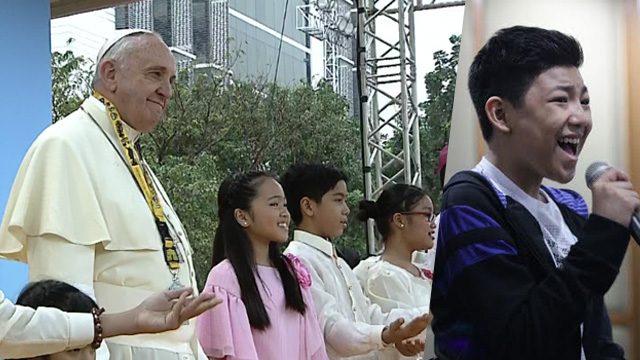 MANILA, Philippines – It was an inspired, pitch-perfect performance from one of today’s brightest young singers, Darren Espanto.

The Voice Kids runner-up performed the 1995 World Youth Day song “Tell the World of His Love” for Pope Francis at the gathering in UST Sunday, January 18. (READ:‘Voice Kids’ champ Lyca Gairanod to sing for Pope Francis)

It was a fitting number, as the focus for Sunday’s UST event was for the Pope to be able to interact with the youth. Darren sang before thousands of audience during the Inter-Faith meeting and Encounter of Youth at the University of Sto. Tomas. Earlier, Angeline Quinto, Jed Madela, and Jamie Rivera performed during the pre-liturgical service. Watch the live stream here.

The Pope told the youth: “We don’t need youth museums. But we do need holy young people.”

When asked how he sees Pope Francis, Darren said: “Hope, relief, faith. The Pope is a symbol of kindness and humility.”

As for his message to the youth, this is what he has to say: “Don’t give up. Pursue what you really like. And be yourself.”

Darren was among the performers announced to sing for the Pope’s activities.