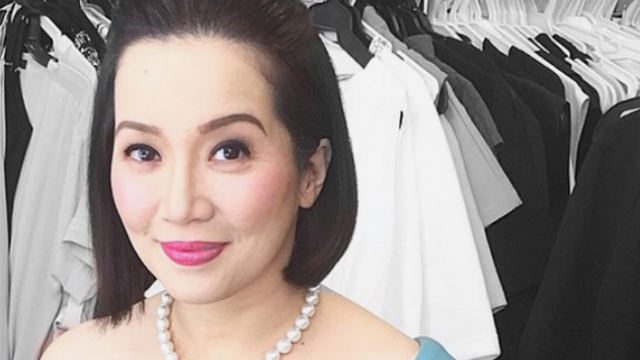 In a comment on Instagram, Kris said that she apologized to Ogie Alcasid and Regine Velasquez after misinterpreting quotes that supposedly came from them about Aquino.

Kris said she personally talked to Ogie about the matter.

On social media and online, Ogie and Regine have said a few words about the issue in general.

Most recently, Ogie told Pep that it would have been best if the President had been there for the arrival honors, but also acknowledged that he did make up for it by spending time with the families later.

“Nakita naman natin yung sinseridad niya na pumunta dun after and makipag-usap sa kanila, pero marami pang kailangang gawin. (We saw his sincerity when he later visited and spoke to the families, but there’s still a lot to be done.)

“Tulungan kaya natin siya? ‘Di kaya maganda ‘yon, tulungan natin?” (Why don’t we help him? Wouldn’t that be good, if we helped?)

In a previous interview on GMA News, Regine said: “Of course, he’s the President… I think he should be more gracious.”

“Kapag dumarating tayo sa time na ganito na may sakuna, yun lang ang napapansin ko. (When we arrive at this type of crisis, that is really what I saw.)” Regine said.

On Twitter, Ogie asked his followers to pray for the fallen officers.

Ogie and Regine are supporters of President Aquino. During the presidential campaign, Regine sang “Hindi Ka Nag-Iisa,” for one of the campaign ads, while Ogie took his oath as President of the Organisasyon ng Pilipinong Mangaawit (OPM) under Aquino’s term.

Meanwhile, Pep reported that Kris unfollowed actress Judy Ann Santos on Instagram after the Bet On Your Baby host posted a photo of US President Barack Obama meeting fallen troops. In the caption, Judy Ann said, “At least Obama knows his priorities” – an apparent rib at the President, who was criticized for not showing up to the arrival honors of his own PNP SAF officers on January 29.

Kris has since followed her back.

On Sunday, February 1, Kris answered comments regarding her brother’s handling of the Maguindanao clash. She said that for as long as people continue to criticize her brother, she will defend him.

The President made up for his absence on January 30, when he spent time with the families of the slain soldiers. – Rappler.com