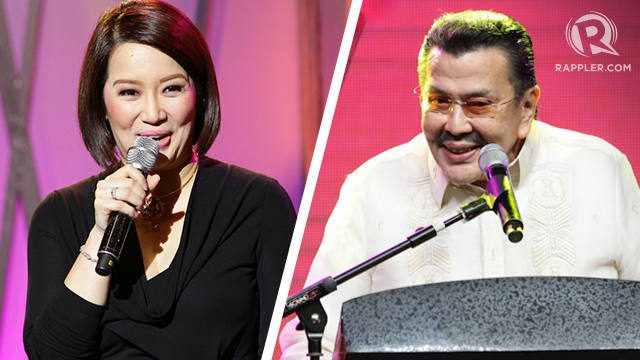 On Instagram Saturday, February 7, Kris shared a photo of  the Manila mayor along with her mother the late President Corazon Aquino.

“I had just finished praying when I got a text from @paulcabral asking if I was still awake. This was followed by a text from Mayor @lenalonte asking if it was okay to give my # to president mayor Erap who was in Biñan earlier tonight,” Kris said.

(When I said hello, he immediately said sorry. “Sorry Kris for what my daughter said. I only found about it now. I feel very embarrassed, especially towards you and and your family.” He added that my siblings and I have been very good and respectful to him. He repeated 5 times the word “SORRY,” I am really sorry.)

(I said: President Mayor, there’s nothing to be sorry for. We are very okay with each other. It’s a big deal that you called me. It wasn’t necessary, but thank you so much.)

“Naging totoong magkaibigan sila ng Mom ko (He and my mom were true friends) & I know part of the reason he called me tonight was because of that bond they shared. In the year & a half our Mom battled cancer, president mayor Erap thoughtfully sent food & fruits consistently. I’ve never forgotten his kindness.”

Kris also said that she has learned so much from the difficult time she’s going through.

“Before I sleep, I learned so much again tonight from this season of my life, about respect, about humility, about reaching out, and about personal effort. Thank You God for continuing to strengthen me, teaching me, and molding me.”

On February 4, Jerika shared a link of an article with the headline, “Kris Aquino defends brother, doesn’t seem to understand duties of the President.” In her post, Jerika said the TV host-actress “feels entitled to be brutally honest day in, day out…but obviously cannot handle the truth herself.”

Kris’ brother, President Benigno Aquino III, has been heavily criticized for not showing up to the arrival honors for the slain PNP SAF officers who died in a violent clash in Maguindanao last January 25.

Kris stood up for her brother, saying that for as long as people bash him, she will defend him.

The TV host-actress has not been spared from the criticism. She previously unfollowed some celebrity friends after comments they made about the President

She later apologized to Ogie Alcasid and wife Regine Velasquez after a misunderstanding over the issue. She and actress Judy Ann Santos have also made peace with each other.  (READ: PH celebrities mourn fallen PNP SAF officers)

Kris’ other friends Derek Ramsay and John Lapus defended her, saying that the Aquinos were a good family and that hurtful words against them were unnecessary.  – Rappler.com