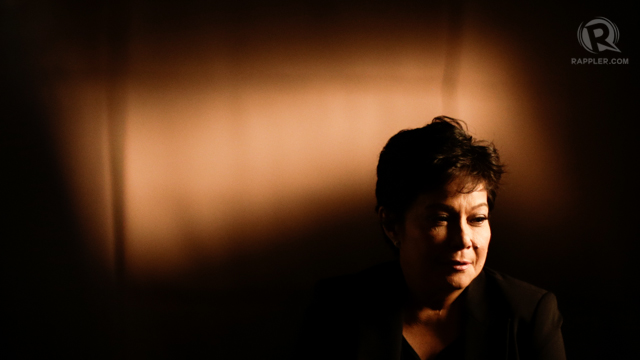 MANILA, Philippines – Her life story at this point has been quite an epic, with its phenomenal rise and equally spectacular fall, and rise again. It all began fittingly with the humble beginning of selling bottled water at the train station in her native city of Iriga in Camarines Sur.

The latest chapter in this story, her 7th Urian Best Actress for her performance in Brillante Mendoza’s “Thy Womb,” may well be the capstone of a full career, if Nora Aunor so deems. But she has found a renewed appreciation in work. And in the context of her formidable talents as an actress-singer, the work has long qualified as a vocation, even in the course of a frenzied life.

Bewildering perhaps best describes the diversity of Nora’s work, from her decades-long prime-time variety show “Superstar,” to the highly regarded world of theater, and to her post-Superstar obscurity as a lounge singer rendering standards of resonant value like “The Windmills of Your Mind.”

Then there’s cinema, where Nora Aunor is always at her most iconic. From the Seventies to the Eighties, Nora blazed a trail of acting masterworks that underscored her evocative persona and flair for drama. Yet she also dared to trifle with those very qualities in the comedy genre that is an overlooked facet of Nora’s artistry.

As her exceptional directors promoted their films abroad, Nora drew the instant attention of the international film community. But she is proudest “when you get recognition from your own country,” as she said in a recent interview with a group of journalists including this writer. This pride is especially reserved for her associates in any given project, and for filmmakers who veer away from convention and forge their own path.

Indeed, the Nora Aunor story has become a whole, divergent and altogether substantial narrative, echoing as well the significant chapters of her early stardom.

She is set to star in the upcoming TV5 teleserye “When I Fall in Love” — together again with Tirso Cruz III, more than 20 years after Elwood Perez’s “Bilangin ang Bituin sa Langit” and 40 years after the massive following drawn by their love team in the early Seventies. In retrospect, Guy and Pip, as they were fondly referred to then, became the prototype for John Lloyd and Bea, Ser Chief and Maya.

This forthcoming serye will be to those euphoric early days like an afterlight, as befits the happy resignation and wisdom that goes with age. It will follow after “Sa Ngalan ng Ina” by the same network, wherein Nora was reunited two years ago with another former leading man, her ex-husband Christopher de Leon.

The Voice, however, has yet to be revived (Check out this lovely medley from Lino Brocka’s rare rom-com, “Dalaga si Misis, Binata si Mister”). It was her singing, after all, that set her on the path to masa-driven celebrity, as she conquered the popular singing competitions of the mid-to-late Sixties, notably “Tawag ng Tanghalan.”

About this singular talent of La Aunor, Nick Joaquin wrote at the time: “The Aunor voice has never been particularly young-girlish. Even at 14, when she pitched it low, the effect was smoky torch. Her teenage fans say that what they like about Nora’s voice is that ‘it can do anything, wild or sweet.’ But it’s in the heartbreak songs that the throat really comes through — and the sound is all woman.”

Nora would record more than 500 songs, many of which would become familiar in the airwaves of her milieu. This fascinating mod period that blossomed into a film career for Nora continues to be revered in today’s fashion, music and cinema.

She was the Fab Four all rolled into her petite figure, with her also screaming fans rattling the fence surrounding Sampaguita Studios, holding vigil at Tower Production and aggravating the chaos of location shootings.

Nora understood and accommodated this adulation, even reserving quality time for her fans because she used to be one herself.

In the mestiza-oriented showbiz scene until that point, there was the pre-Nora period and then the Noranian invasion and rule. In the pre-Nora days, she was a huge fan of the voluptuous Amalia Fuentes, our country’s answer to Elizabeth Taylor. But Nora switched her devotion to that other mestiza celebrity then, Susan Roces, after Amalia ignored her autograph request.

“I have no regrets because I found out na ang bait-bait pala ni Susan Roces. When I guested in her film ‘Pangarap Ko’y Ikaw,’ the more I realized Susan was good-natured even off-camera. That’s the reason I see myself in my fans.”

Her fan base became Nora’s refuge, during those not very few personal crises that were considerably of her own making.

“A severe crisis can make or unmake you,” she said. “Even as I was going through [those] trials, I sought strength from my fans. Pagnakikita ko sila, nagkakaroon ako ng lakas dahil nandoon pa rin ang pagtitiwala nila. It is no joke to lose friends as you lose money, but somehow my fans had stayed with me through my worst time.”

Like their own Superstar, who turned 60 this year, the fans too are getting older.

“But they remain loyal,” Nora says with that earnest pride. “There are those who got married, had children, but when my name is mentioned, they still remember. I realized this during my overseas concerts in the West Coast. Time and distance didn’t dim their memories of me. I have yet to sing one song and they’re already screaming like in the old days.”

That her voice, which we have not heard from in a long time, still lingers in our collective memory is affirmed by the Organisasyon ng Pilipinong Mang-aawit’s conferring on Nora its Dangal ng OPM Award in 2011.

“There is a high possibility I will get my singing voice back,” Nora says. “When I am done with my commitments here, I’ll go to Boston and see a throat specialist.”

Will Nora submit to a procedure that is unlike her natural self in all this time? Her fans and, for that matter, the broader public will want something as familiar and endearing as the sight of Nora’s eyes and mole. – Rappler.com

Pablo A. Tariman is a journalist, critic and impresario who has extensively covered the classical music scene as well as the showbiz community