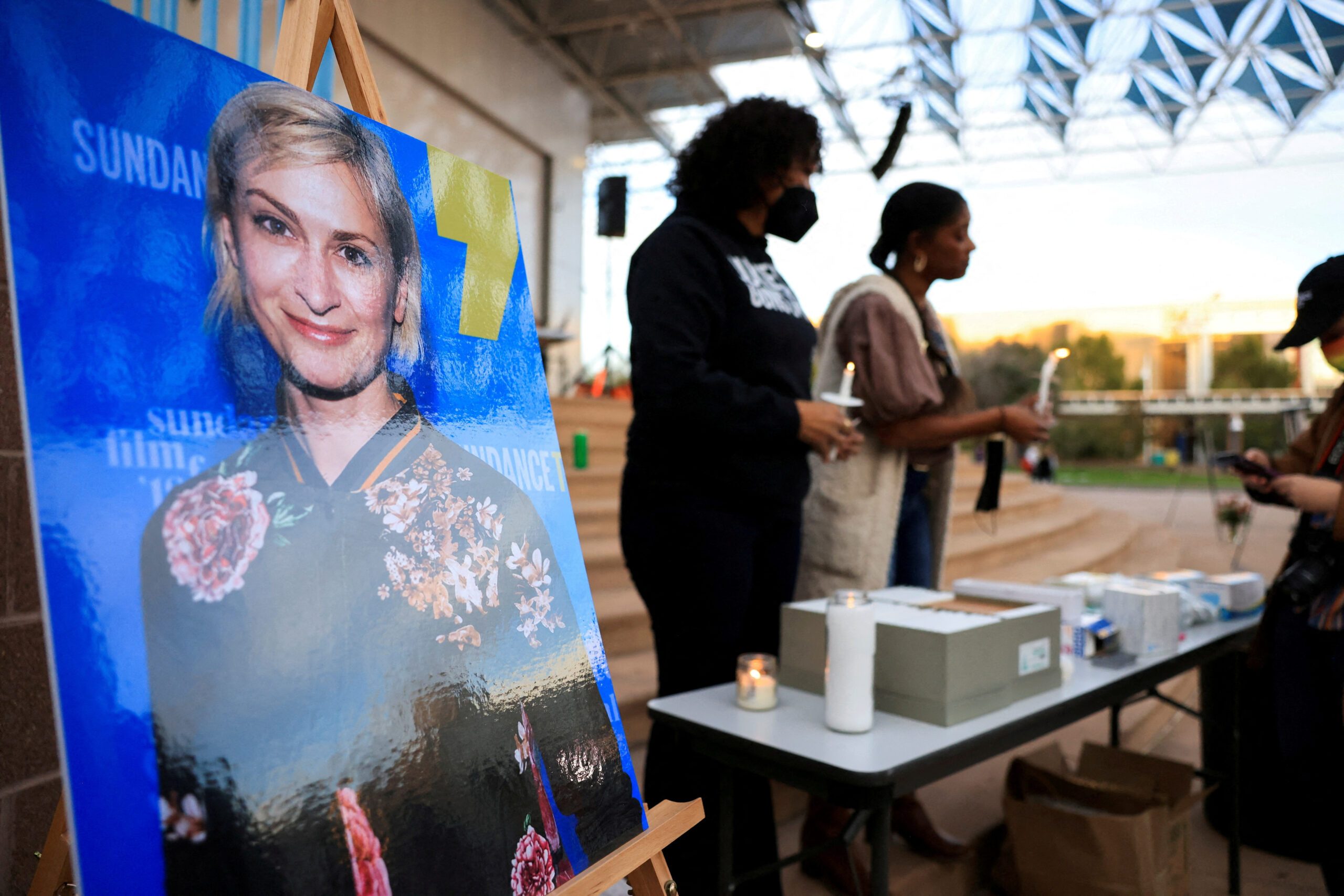 FILE PHOTO: An image of cinematographer Halyna Hutchins, who died after being shot by Alec Baldwin on the set of his movie "Rust", is displayed at a vigil in her honour in Albuquerque, New Mexico, U.S., October 23, 2021.

Facebook Twitter Copy URL
Copied
As part of the settlement, production on 'Rust' will resume in January 2023 with the late cinematographer's husband, Matthew Hutchins, serving as executive producer

ALBUQUERQUE, New Mexico – Actor Alec Baldwin and the producers of the Western movie Rust have reached a settlement in a wrongful-death lawsuit brought by the family of cinematographer Halyna Hutchins, who Baldwin shot dead during filming last year, the parties said on Wednesday, October 5.

As part of the settlement, production on the low-budget film will resume in January with the late cinematographer’s husband, Matthew Hutchins, serving as executive producer. Joel Souza, who was wounded in the shooting, will continue as director and the same actors, including Baldwin, will play principal roles.

“I have no interest in engaging in recriminations or attribution of blame,” said Hutchins, a mergers and acquisitions lawyer. “All of us believe Halyna’s death was a terrible accident.”

Baldwin and others could still face criminal charges over the death of the 42-year-old cinematographer in October 2021 at a ranch near Santa Fe, New Mexico, a local prosecutor said after the settlement was announced.

During production of the movie, Halyna Hutchins was shot dead by Baldwin when a revolver he was using during a rehearsal fired a live round. The 30 Rock and Saturday Night Live actor denied responsibility for Hutchins’ death and said live rounds should never have been allowed on the set.

“We are grateful to everyone who contributed to the resolution of this tragic and painful situation,” Baldwin’s lawyer Luke Nikas said in a statement.

New Mexico First Judicial District Attorney Mary Carmack-Altwies said the settlement would have no impact on her decision whether to file criminal charges in the case. Investigators have focused on determining who handled the pistol Baldwin fired.

“While civil suits are settled privately and often involve financial awards, criminal cases deal only in facts,” her office said in a statement. “If the facts and evidence warrant criminal charges under New Mexico law then charges will be brought. No one is above the law.”

The Hutchins family’s lawsuit, filed in February, said Baldwin bore significant liability for the killing as he should have checked the gun did not contain live rounds, should not have pointed it at a person and should not have pulled the trigger.

Baldwin has said he was told the gun was “cold,” an industry term meaning it was safe to use, and he did not pull the trigger.

An FBI forensic test of the single-action revolver found it “functioned normally” and would not fire without the trigger being pulled.

In August, New Mexico’s Office of the Medical Investigator ruled the shooting an accident as the gun did not appear to have been deliberately loaded with a live round.