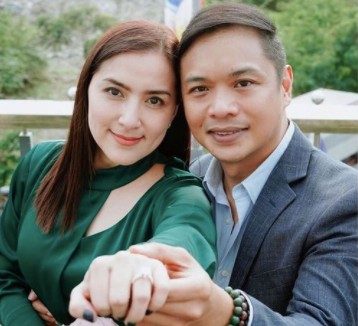 In one photo, the sign “Will You Marry Me?” could be seen in the background as Ara and Dave showed off the engagement ring.

“And it’s official! @therealaramina is now engaged!
Congratulations Dave and Ara! Sooooo happy to be part of this beautiful moment,” the caption read.

On Wednesday, January 13, posted about the wedding proposal, thanking God for bringing Dave into her life.

“Dave, thank you for being my answered prayer. Thank you for not giving up on me. You are the reason why we have stronger days together. God led us to each other for a greater purpose. Let us both live it with faith and love. Yes, I will marry you!”

Dave is the president and CEO of the Philippine International Trading Corporation (PITC), with the rank of undersecretary. According to his profile on the PITC website, he was previously a provincial board member of Laguna.

In an interview on Magandang Buhay, Ara said that she was happily dating a non-showbiz person. She has been low profile about the relationship.

Ara has a daughter, Amanda, with ex-boyfriend Patrick Meneses. She is currently part of FPJ’s Ang Probinsyano. – Rappler.com