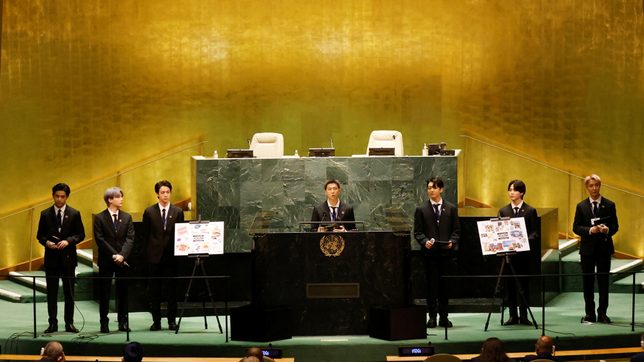 'WELCOME GENERATION.' Members of South Korean boy band BTS speak at the SDG Moment event as part of the UNGA at the United Nations Headquarters, in New York, US.

Speaking before an audience of their fans, diplomats, and leaders from all over the world, South Korean superstars BTS advocated for vaccinations amid surges in COVID-19 cases in different parts of the world.

The group also confirmed that all seven members have been vaccinated against COVID-19.

“What is important is the choices we make when we’re faced with change,” BTS member Jung Ho-seok, more popularly known as J-Hope, said prior to confirming their vaccination status.

The septet, speaking during the SDG Moment 2021 event on Monday, September 20, talked about their own experiences from the past two years, as well as the experiences of their fans worldwide.

BTS earlier asked fans to share images, emojis, or a word to illustrate what their world was like today.

“Of course we received vaccinations. The vaccination was sort of a ticket to meet fans waiting for us and to be able to stand here before you today. Just like we said in our message today, we are doing the things that we’re able to do right now,” said the group’s leader Kim Nam-joon, more popularly known as RM.

The seven-member group flew to the US to join South Korean President Moon Jae-in at the UNGA. The South Korean leader earlier emphasized the need to be more “attentive” to the “voices of future generations.”

In their speech, which preceded a performance of “Permission to Dance” at the UN Headquarters in New York, the group spoke about the “welcome generation” – youth who’ve managed to adapt and “keep forging ahead” during the COVID-19 pandemic.

BTS, one of the biggest pop groups in the world today, had been appointed by Moon as Special Envoy for Future Generations and Culture.

The 2021 appearance at the UNGA isn’t the group’s first interaction with the UN. It’s their third time to speak before the UNGA – the first was in 2018 and the second was via a taped message in 2020. The group first worked with UNICEF in 2017 for the “LOVE MYSELF” campaign.

The Philippines is a far cry from those numbers. A little over 20% of the population has gotten at least one dose, while only over 16% are fully vaccinated.

During their taped address before the 2020 UNGA, BTS spoke of hope and encouraged the youth to “imagine the future.”

During the G7 summit in June 2021, South Korea made a $200 million pledge to COVAX, an international program that aims to distribute COVID-19 vaccines to lower-income countries.

“We are committed to making continued endeavors to expand vaccine supply and support,” Moon said in his remarks at the UN. – Rappler.com