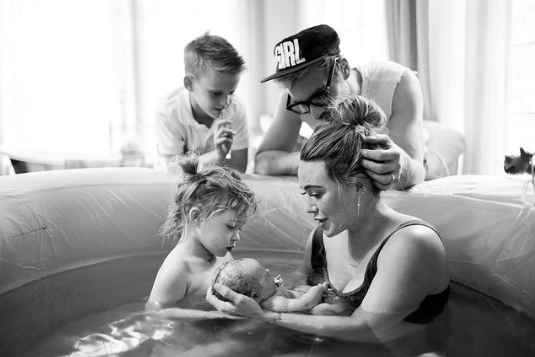 Hilary Duff welcomed her second child with husband Matthew Koma on Wednesday, March 24. The 33-year-old actress announced her birth in a Instagram post on Sunday, March 28.

Seen in the photo are two-year-old daughter Banks Violet helping Hilary hold the newborn as Matthew and Luca looking on. Luca is Hilary’s 9-year old son with ex-husband Mike Comrie.

Before the announcement, Hilary hinted that she had already given birth. In an earlier Instagram post, the singer-actress shared a photo of daughter Banks with the caption: “I’m a big sister… marinating on how I feel about that.”

Aside from starring in Lizzie McGuire, Hilary is also known for headlining A Cinderella Story, The Hunting of Sharon Tate, and Younger.

Hilary and Matthew married in December 2019. They first announced that they were expecting their second child together in October 2020. – Rappler.com